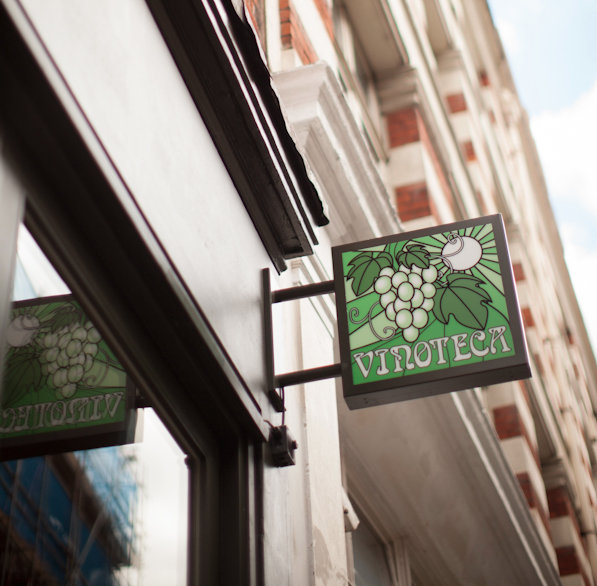 The dining options in Soho continue to grow. You will be well aware of this if you work or eat in the area, or if you read restaurant reviews in the broadsheets or on blogs.

Our exposure to openings is so great that one could be forgiven for assuming that W1 is, in fact, one massive food court of awesomeness. But eating out in Soho is far from foolproof and it is certainly not a saturated market. In fact, I think the number of really inspiring, or even just reliable restaurants in this area remains relatively few. I sometimes wonder too whether the ones that shout loudest on arrival will still be here in a few years time. The relatively quiet addition of a Soho outpost of Vinoteca is therefore a welcome one. South American themed fashionista it is not. But if you’re looking for dependable and enjoyable, then this should float your boat.

The Vinoteca brand started in 2005 with a more than competent, if small, wine shop come bar come restaurant at the bottom of St John Street in Farringdon, and extended to include a place in Marylebone at the end of 2010. Their latest venue opened a couple weeks ago, a few doors down from Polpo.

In keeping with most new Soho restaurants, the ground floor bar and restaurant has a very ‘corner of Beak and Marshall’ feel to it, albeit in a slightly middle of the road, grown-up way. Near floor to ceiling windows connect the room to the bustle of the street outside, and closely packed tables and bare brick walls help to create an attractive, enjoyable and chatty atmosphere. This room is for walk-ins only, though there’s a bookable upstairs dining room too. Which strikes me as a sensible way of bridging the reservations / no reservations conundrum (albeit downstairs feels like the much better room).

Though the menu is set-up for traditional 3 course dining, we couldn’t resist reverting to current Soho trend and decided that, instead of individual starters, the 3 of us would share a plate of croquettes and a selection of cold meats.

I have been disappointed by this sort of order on numerous occasions before: potato croquettes / croquetas often represent a cheap and easy way for a restaurant to make money out of a small amount of spud and even smaller amount of ham; and though I do not think that cured meats have to be a bargain to be enjoyable, on occasion it feels a little like we are being taken for a ride (particularly where the meat has come from something that once so much as smelt an acorn).

Not so at Vinoteca. There were only three croquettes on our plate (at about £2 a piece), but these were each more than a mouthful, were béchamel rather than mash based, were filled with hunks of smokey ham, and were delicious. So none of us grumbled. Better still, three huge plates of freshly sliced Italian and Spanish cured hams and sausage averaged somewhere around a fiver a portion and represented outstanding value. A soft, faintly peppery, salchichon was my pick of the bunch. You could do a lot worse of an eve, a lunch, or, in fact, a long afternoon, than to take a seat here with a few plates of meats and any number of bottles of wine.

Our main courses broke no new ground. But I don’t think that’s Vinoteca’s aim. I had a nicely cooked whole John Dory on a bed of seasonal veg and just the right amount of a well balanced cream reduction sauce. Slow roast shoulder of lamb with champ and runner beans was simple but tasty and, like the John Dory, good value for £13.50. I like how the menu is short – six options for each course – and that this changes on a daily basis. A grilled bavette steak and chips is pretty much the only staple dish on there and it quietly hit the spot. This is solid brasserie cooking; a vehicle for a good evening, rather than the focus of it.

Vinoteca wouldn’t live up to its name if it did not seek to satisfy us with its grape juice. So it goes without saying that the wine list is varied and interesting. There are many wines available by the glass and, importantly, it’s totally approachable in terms of cost. In fact, we drank very well from the top of the list. I can’t be unreservedly glowing, though – someone has spent ages selecting and sourcing the wines, but only the most determined customers will work their way through the densely packed jumble of words and numbers that they are presented with. Wine lists shouldn’t appear more complicated than the Riemann hypothesis.

I liked Vinoteca Soho. It is a safe option – and I don’t mean to damn it with faint praise. The food was decent and was excellent value, wine flowed (one of my companions took on the responsibility of trying to master that list) and, overall, the place felt like it had been running for a number of years, rather than just a few days. Lights needed to be knocked down a few watts, but tweaks like that are in hand and I would be very surprised if this restaurant isn’t set for a long run. A solid offering, rather than a flash in the pan trendy joint. It’s a welcome addition to Soho.

£40 a head should do it for a couple of courses and a few leisurely glasses of wine.