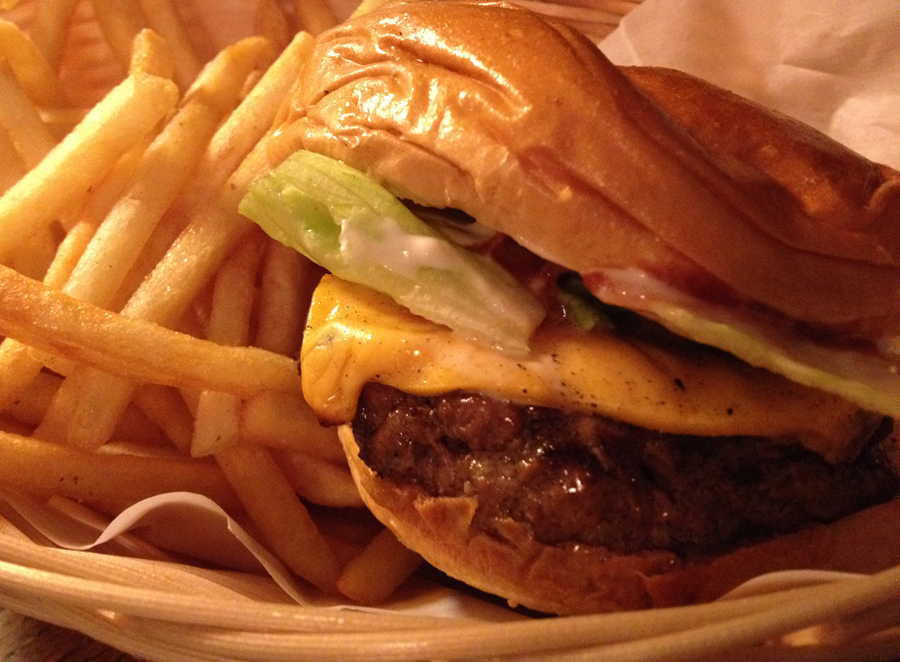 There was an interesting piece in the Evening Standard just over a week ago on how demand from burger bars for restaurant space had increased by 40 per cent over the past year.

When I say ‘interesting’, I really mean it was just a load of guff; an eminently scanable space filler, saying nothing particularly profound or new, and presumably, possibly, just maybe put out there by a PR agency on behalf of the ‘restaurant lease specialists’ mentioned in the article. Good burgers in massive trend shocker. Thanks for that chaps.

That said, the fact good burger joints are now a pretty common sight in London is a good thing; not news worthy right now, but good for informal dining fans nonetheless.

For whilst a burger will always just be a burger (no matter how ground breaking, game changing or resolutely plain vanilla it is), like curries and pizza, sometimes you just need one.

Which means the more places that sell decent, blushing pink patties topped with American processed cheese and encased in a sturdy bun, the better. You shouldn’t have to travel far to fulfill a simple urge. And you certainly should not have to queue.

Last Saturday was one of those urge nights. We were a couple of sociable beers down somewhere near Selfridges and all signs pointed towards Meatliquor. Save that it was 7:30pm and the queue was 50 deep.

We were saved by that 40 per cent increase in demand for restaurant plots, because just a few yards behind the last person in the Meatliquor line is a newish burger bar called Tommi’s. Happily there was no waiting and it totally sated the urge.

Tommi’s is Icelandic … but the guys at Burger Anarchy used up all the good volcano and economic collapse puns when they wrote about the place, so I’ll cut to the chase: this place is tiny, charming and, crucially, serves very acceptable burgers and spot on chips.

They’ve gone for the stripped-back budget interior design. Flyers, posters, hand drawn signs abound and it generally feels very friendly. Place an order, grab condiments from the side and wait for your name to be called when your burger is ready. It’s informal and homemade looking, and basically feels like something you’d find attached to a student bar.

I fully expected pot noodles and cheese and ham toasties to be passed around, but the menu is in fact gloriously limited / focused:

(I suspect this is as much down to the size of the kitchen and storage as it is design and clever business planning.)

Last Saturday night all those options were well executed.

A steak burger was a dense, coarsely ground puck, properly seasoned and cooked nicely. But I agreed with the guy behind the counter – the cheese burger is the better option and a great buy at under £6. Other bits fell in place nicely: there was American cheese; a dense, squidgy and sturdy but deceptively light bun; just enough lettuce, tomato, mayo and ketchup; and the chips were straight from the McDonalds school – which is a good thing.

It’s probably worth mentioning that they don’t have an alcohol licence, though I think that adds to the charm – last Saturday a couple in their late 60s, maybe 70s, were tucking with relish into their cheeseburgers and fries, whilst knocking back a rather good looking bottle of chianti from paper cups. Nice.

That’s about it, really. It can’t have accounted for many square foot of that 40 per cent, but Tommi’s is a welcome addition to the gang.