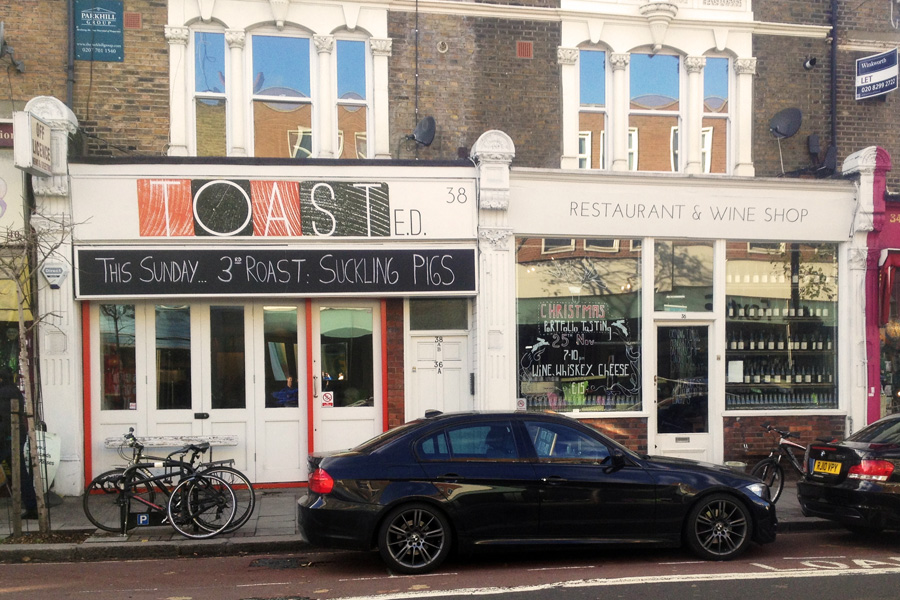 As we trundle towards the inevitable mass of end of year round ups, I suppose it’s apt (and not just tardy) that I get round to writing about a November lunch at one of my favourite restaurants of 2013.

I’d like to say it’s a place I stumbled across on day one and have been regularly going to ever since. Except, these days, day one is too late to appear in the know; the pre family and friends dress rehearsal of the soft opening industry launch night is where it’s at. I’m also no regular, having eaten there only once.

Even so, Toast in East Dulwich felt very much like somewhere I’d been dining for some time. Or somewhere I should have been. It was familiar without being repetitive or clone-like. The menu was short and to the point. We wanted (and had pretty much) everything on it. A contented buzz emanated from both the customers and the staff. Stripped back décor appeared appropriate rather than ubiquitous – wires and bricks left exposed due to necessary penny pinching rather than the requirement of current fashion. Good wine flowed.

On that note, here follows a longer than usual note about the wine …

Toast’s list reads as well as any around. That’s not to say I recognised and marveled at the interesting wines populating it (I appreciate and know a bit, though my wine knowledge, or more particularly my wine memory, is patchy). Rather, the list is set out in an extremely approachable and useful way: wines are grouped by style and described in plain English (this seems obvious yet unusual). Sometimes the grape type is the descriptor, other times by the region or even a good old fashioned adjective – whichever is most appropriate. I’m sure that on a micro level the content is worth cooing over too, however for those of us who value wine but are not oeno-experts, the list is notable because, on a more macro level, it is accessible in both design and price range. I should mention that co-owner Alex was mega enthusiastic, clued up and helpful too.

None of this was a surprise. Toast doubles as a wine retailer and, as at 40 Maltby Street, The Quality Chop House and the Terroir group restaurants, appreciating and enjoying (first hand) the care and effort that has gone into curating a decent wine offering is integral to the experience of your meal. For us, a Gamay from the Auvergne (Jean Maupertuis, La Plage 2012) hit all the right spots throughout the savoury courses and a delicious ripe and red sticky (Antolini, Recioto della Valpolicella Classico) was one of a couple of sweet things that rounded off proceedings rather nicely.

Rustic bread, butter and salami, hewn from loaves, pots and thick pink trunks on the table next to us, were the other book end to the lunch. In between was a gathering of small sharing plates. Which at all times felt convivial and appropriate, rather than the tired end of a trend. They showed a touch of flair and invention, but mostly just a strong grasp of flavour.

One plate of freshly made cheese (as per the French fromage blanc), with onions and dill was pretty as a picture, awoke the taste buds at first bite, and was light and tangy and super successful when you majored on the onions, dill, dill oil and crumbs that came with. I think it would have worked better with less of the cheese on the plate, though. Another dish of smoked herring and romesco sauce, scattered with chickpeas, pickled onions and pea shoots was similarly superb when the ratios were right. But if you scooped too much of the intense romesco, other flavours were lost. These are small gripes; they were still flavoursome, beautiful and far better than decent dishes. Thing is, the other plates were stunning and sometimes it’s good to balance high praise.

Pork belly with wet polenta and winter greens was flawless and extremely welcome on a fresh winter day. A plate of virgin white horseradish risotto was awesome – the rice oozing across the wide plate highlighted a perfect consistency, whilst the pungent, mustardy and slightly acidic hit of horseradish was knockout.

Which is saying something given it followed an insanely good dish of kale and tuna butter. Kale and tuna might sound underwhelming to some, but this was an outstanding plate of food. Death row meal material. Soft, warm, yielding kale, soaked in butter juices and dotted with flakes of tinned (or fully cooked through) tuna. Apparently this used to be an accompaniment to a steak dish, but they realised it merited its own platform. Damn right.

At lunch there’s only one dessert and we were too late to catch the last of it. A yoghurty orange concoction in a wee tumbler was knocked up from somewhere to pacify some of our sweet tooth, with that sticky red sating the rest. It was kind of them to do that. We were stuck in a blind spot and getting attention was occasionally tricky. When it came, that attention was always well judged and amiable.

By the time I made it, Toast had been around for about six months, though it felt like it had been a Lordship Lane institution for a decade. There are strong whiffs of the best of modern Parisian bistros in the set up and in some of the cooking. If you’ve the urge for some of that, then you should definitely go. I imagine it’s absolutely rocking in the evenings, but you could do far worse than taking the afternoon off and relaxing into a proper two bottle of wine lunch.

I can’t remember exactly, but probably £7-13 for each plate of food, and in the £30s for the wine (well worth it and plenty of wines in either direction of that price too). Assume £40-75 pp.

I’ve eaten out far too much this year, but achieved a reasonable balance of new and established places and the full mix from street food to serious fine dining. The meals of 2013 I enjoyed the most, though, were had at: Sushi Tetsu, Koya, Mayfields, Upstairs at the Ten Bells, The Clove Club, St John Bread and Wine, Viajante, Green Man French Horn, Morito, The Quality Chop House, Gymkhana, Burnt Ends Singapore, Honey & Co, Street Feast and ToastED. 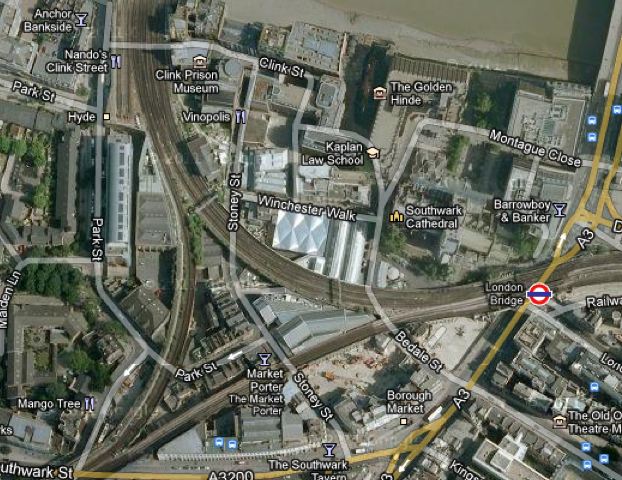