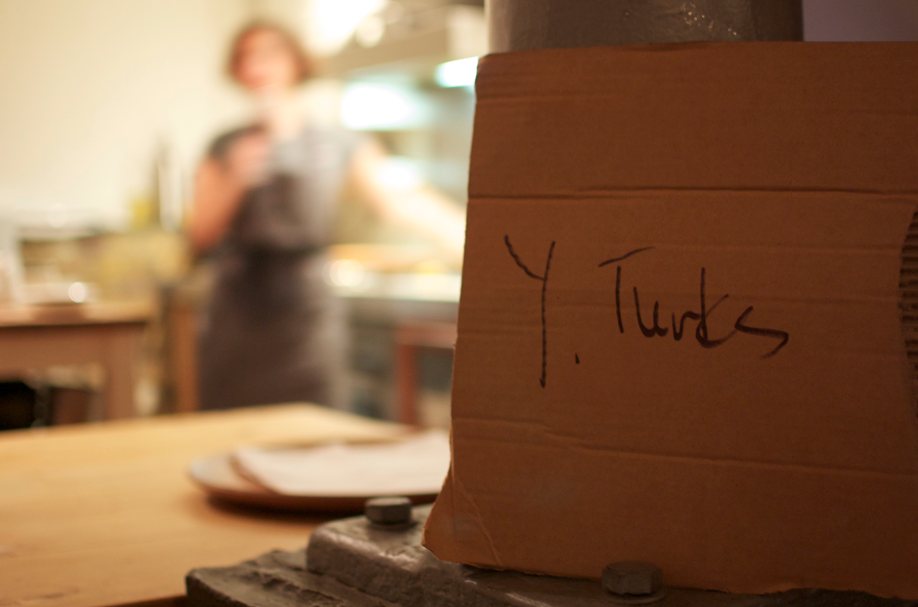 At the start of 2011 I made a wish list of restaurants and food events I wanted to go to. The list is here, if you’re interested. If you aren’t interested, indulge me for a second anyway …

“I also predict the increasing professionalisation and popularisation of supper clubs and pop up restaurants – Young Turks will be big this year and I would like to get a place at their table at some point.”

Those in the know will be thinking that it didn’t take the talent of Nostradamus to write such a statement, nor was there any risk involved on my part. Even so, after an absolutely storming evening on Saturday, when I did have a place at the Young Turks table, I’m rather pleased with the comment. If you weren’t in the know back in January, consider yourself on notice now; the Young Turks (James Lowe, Isaac Mchale and Ben Greeno) rock.

You can read more about James, Isaac and Ben here, and also lots on James here. In short they are 3 young chefs itching to move on to the next stage of their careers who are collaborating which each other on projects and events in the meantime. One of the other diners, Jess, was taking photos of the evening and has allowed me to use them in this post. If you get bored of my writing, just scroll down to see her lovely shots of the great food (if you click on the first one, you’ll get a slide show).

The event on Saturday (and the 3 preceding evenings) was a pop up restaurant at the Loft Project, a brilliant dining space on the Kingsland Road that showcases the next generation of talented chefs. James and Isaac (Ben’s on the other side of the world at the moment) put on 6 courses with matching wines. They sandwiched those between prosecco and snazzy canapes to start, and coffee and moreish petit fours to finish.

Every course was brilliantly successful and there were no misses. It’s rare you say or read that. At one point the room fell silent as everyone delighted in the taste and texture of a humble potato. I doubt you’ve ever said or read that.

The canapes were a statement of intent. Gem lettuce trimmed into the shape of a leaf acted as the serving platter for a dollop of curd and squares of anchovy. Smoked cod’s roe and pickled kohlrabi were served on what I suppose could be described as a rolled-oat snap. We also ate thin shreds of James’s cured lop ham and smooth lardo from a Middle White pig. All good, neat and inventive. But nothing on the next six courses.

The first was slow cooked hen’s egg, ramson puree and snails served on sour dough. You know when you have snails in France and for the first 2 chews you think ‘that’s awesome, I love snails and garlic‘ but by the third chew (and over the course of the next 8 snails) you’re like ‘actually, that garlic is massively overpowering and mildly nauseous‘? Well, these snails were those first chews throughout. The egg yolk was unctuous and the ramson surprisingly and pleasantly sweet. The colours on the plate echoed Spring, which was utterly appropriate for this time of year.

The second course was a beef tartare like no other. Roughly chopped raw rib with tiny little capers, chewy croutons and delicate dollops of a salty oyster juice cream. The chickweed on top reminded me of those pictures you see of the Noma wood sorel tartare. I really savoured the last forkfuls as I knew this would be my favourite dish of the night.

But then we were served the next course of golden and purple beetroots, iced goat’s milk and pickled elderberries. Boom. Whether you took each ingredient individually, the beets and goat, the goat and elderberries, the elderberries and beets, or all three, this was fantastic. They’re classic combinations, but done in a great, modern way; salty goat’s cheese ice disappears as soon as it hits your tongue. This was my favourite dish. Until the next course.

Which was that silence inducing Jersey Royal. I think they’d cooked them in a stock (I don’t know what of) which enhanced the (already great) natural flavour of the little spud. Three little spuds were served with monks beard, crab meat and a creamy foam. Who knew potato and crab meat went so well? Comforting but refined. Outstanding.

Having bigged the potatoes up, the final savoury course really was my favourite dish of the night. The best chicken I’ve ever eaten, served on rye with hop shoots (like Jean Claude Van Damme, big in Belgium, apparently) and amazing spring onions. Again this felt like comfort food, yet it was also clever and technically sophisticated. The flavour of each ingredient was individually highlighted, yet each also complemented the other components perfectly. We’re all guilty of saying ‘I won’t have the chicken because I can cook that myself at home‘. No we can’t.

Finally we had chocolate malt ice cream with a jelly made from the outer shells of a coffee bean. There was some debate on our table about whether the textures of jelly and ice cream are actually a good match. I personally like the way it reminds me of childhood and fully enjoyed the dessert, particularly with the stout it was served with (see below). It’s no shame on the dish to say, though, that this was probably the weakest course of the evening.

Each dish was matched with wine chosen by someone called Jade Koch from the St John wine supplier (HG Wells), and each one of those matches a real success. I particularly like the pinot noir that had been paired with the beef tartare. The mini glass of treacley stout served with dessert was also a standout – whereas the preceding wines complemented their dishes, the stout added a fourth dimension to the ice cream, malt and jelly that it was served with.

I can’t be gushing enough about the food that was served, the room, the atmosphere … the whole evening. I should also mention that front of house was run by Dan and Chris from the Clove Club – a supper club run out of Dalston. I think these guys have links to James and St John Bread and Wine. Bottom line is they were on the money and I’ll wager their evenings will be similarly awesome.

We paid £60 and I can honestly say I have rarely, if ever, eaten and drunk so well. If I have, it cost a lot more. You should keep an eye on these boys and when they next announce an event, don’t hesitate to book up. I only got my place because others had pulled out. I suspect the cancellers feel like schmucks now. 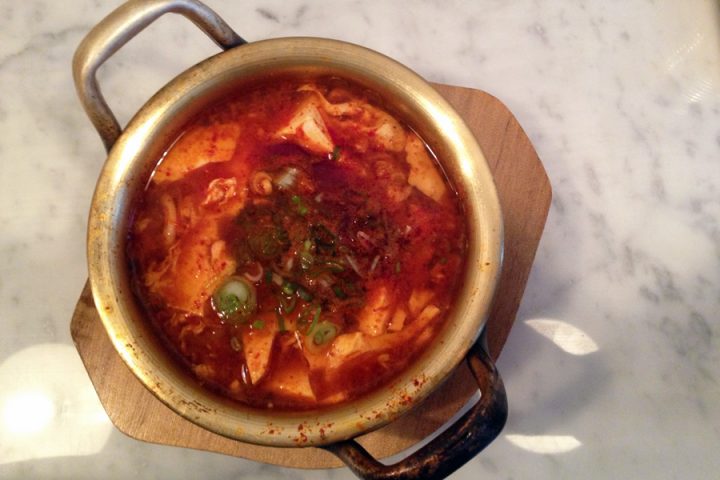 2 thoughts on “The Young Turks at the Loft”