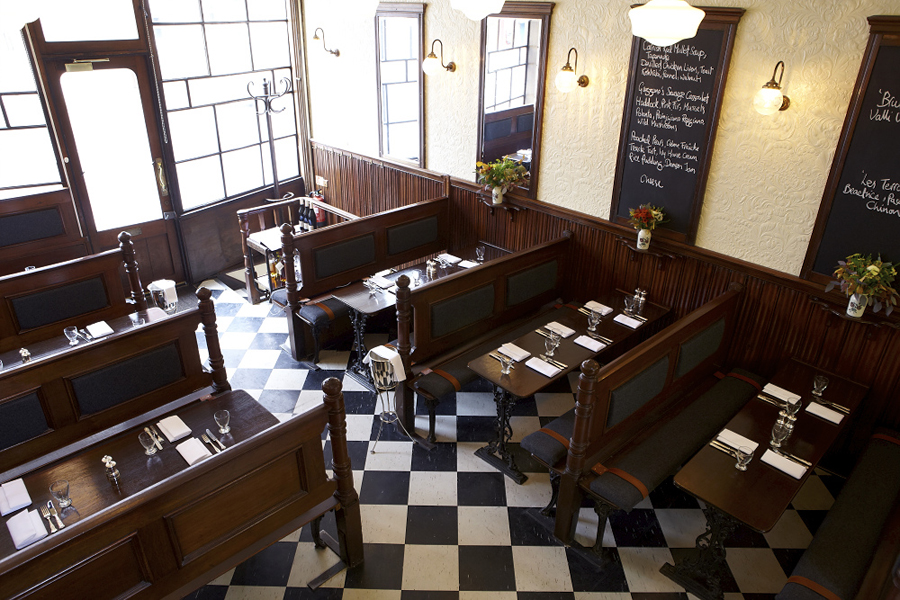 Note: please see September 2013 update at the base of this post

My very first London commute included a walk, jog or cycle southwards along the Farringdon Road. There weren’t many mornings, as I turned left off Roseberry Avenue towards the City, when I didn’t think “it’s downhill from here”.

I always glanced left about fifteen metres later, just as the literal meaning of that thought became effective and the metaphorical meaning darkened, and had a second thought. Which was “I love the look of the Quality Chop House, must try it out sometime”. But I never did. The Eagle, Moro, Ginnan and later Morito always prevailed.

And then the Quality Chop House closed. I felt bad for never going in and just peering through the windows at the funny cubicles.

Admittedly I got over this pretty quickly by telling myself that, whilst it looked quirky, and I’d heard people had fond memories of the place, they couldn’t all have been quality ones, otherwise why would it close? Restaurants are that simple, right?!

So the place stood empty for maybe a year, with a seemingly permanent pile of uncollected rubbish outside, but still with one of the most charming frontages in London. And then I moved to a different area and sort of forgot about it. I knew that it opened as a meatball restaurant, but that didn’t last long. Then, recently, I heard that piles of rubbish and renovation materials had started to appear. Was the Quality Chop House being resurrected?

For whilst the frontage and the name remain the same and the cubicles are still in place, really, it is a new restaurant: the new incumbents have kept the name mostly because they realised they will always be “the place that used to be the Quality Chop House”; and the cubicles are still there because they realised that they were Grade II Listed, so didn’t have a choice.

It looks great inside. There are two rooms: a charming dining room and a stylish wine bar. Those cubicles are in the dining room. Once apparently very uncomfortable, they are now inventively and comfortably upholstered. Add a lick of paint and styling that’s true to the dining room’s past, plus a window into the kitchen, and you have a room with bags of character. The wine bar is spot on too: subtle character and class without pretension. I really liked it.

The fact that half of the Quality Chop House is intended as a wine bar (and shop) reflects the owners’ passions and industry pedigree. On the face of it, the list is not cheap. But it is interesting. There should be plenty of customers who appreciate the opportunity to drink well-kept and sourced wines at a flat £5 mark-up on their retail price. The opportunity (which we took up) to have three glasses of matched wine with your meal for £15 is pretty imaginative too. Couldn’t really tell you what the ones we had were, mind, save that the first one smelt of urine but tasted good and that the last was a killer German Riesling that I can’t remember the name of. I am literally their target audience.

During the day, and through the evening in the wine bar, there is a simple, modern menu to choose from. It’s from the St John family tree style of cooking: short and ingredient led. Which is a great approach, I think. I haven’t eaten from this menu but I will do. A pork or lamb chop, horseradish mash and a glass of wine for £13 seems like a cracking modern bourgeois concept to me. Though there’d be serious competition from items I’ve spied recently, like longhorn mince and dripping toast, or hot watercrust pork pie and piccalilli.

In the evening the dining room side of the Chop House serves a set menu only. I like this. Theoretically it means less waste, interesting evolving menus and no worry about order envy. You just need to be at peace with how much you’ll spend at the outset, which can be harder, but actually often cheaper, than ignoring the cost until the end of the meal.

On the night I was there, the kitchen served us boquerones on grilled sourdough and prosciutto to start, a portion of Thornback ray wing on a kohlrabi salad, Denham estate lamb, and apple crumble and custard infused with hops from the Kernel brewery. Other nights follow a similar format: two nice bites like artichoke, rarebit or raw haddock; a fish course like seabass in a shellfish broth, or hot smoked mackerel and celeriac; proper British farmer sourced meat and seasonal veg; and a traditional and comforting dessert like Queen of Puddings or chocolate tart.

And it was. The boquerones and ham were excellent – you can’t go wrong with salty, quality appetisers like this. The ray course was tasty but not as good as it might have been – whilst it was well cooked, buttery and soft (cartilage and all), it was also really too small a portion and the dressing for the kohlrabi needed more acidity. The next two courses were served for us to share between ourselves. Leg and shoulder of lamb were bang on cooking wise, and the crumble exactly as it should be, though both were put in the shade by that hop infused custard; I hope our jug wasn’t supposed to go round other tables too. It was all very pleasing and tasty. Maybe not with the twist or flair that I had been hoping for, but enjoyable and quality food nonetheless.

At the time I couldn’t quite decide whether the food matched the £35 price tag. On the one hand, £35 on food with a shared bottle of wine means a minimum £50 plus meal and that starts to get a touch edgy; on the other, it’s easy to spend the same amount in most restaurants these days, whether on a few plates of overpriced tapas or one portion of turbot at the new Hawksmoor Air Street.

My view now is that it probably was just about right. And had the ray been bigger and lamb been individually and more imaginatively plated, then I would have left with expectations surpassed and Scrooge-like bean-counting well and truly satisfied. Moreover, I still think eating out is never just about the food. You get significant value and enjoyment out of a venue and the service – and the Quality Chop House has got loveliness and competence in abundance on both those fronts.

It was day two, I think, when I visited the new Quality Chop House, and will only improve from a pretty strong start. I loved the feel of it, the owners are really clued up, and I would be surprised if it doesn’t become a real gem in an area that’s already got a number of good spots. It doesn’t seem such a shame now that I never made it to whatever was there before.

The Quality Chop House in 3 words

Set menu + Kernal beer + set wine + service = about £60 pp. You could get out for much less with a bottle of wine and some grazing plates.

I’ve been back for lunch and evening meals in the wine bar a number of times since writing this post. On each occasion the food from the bar menu has been uncomplicated, yet excellent and interesting. If it’s on, I never fail to order monkfish liver, which is far superior to any seared lobe of fois gras you’ll ever be served. The best accompaniment to that has been preserved lemon and sea herbs. Lamb breast ribs with mint sauce are a crowd pleaser, as is minced beef on dripping toast and big bowls of clams. To be honest, you can’t really go wrong.

Maybe more interestingly, each of those occasions have further highlighted that one of the best qualities of this place is the wine list and their approach to selling it. They offer seriously good wines by the glass, though it’s worth splashing out on a bottle or two if you’re in a group. The mark-ups are very fair and I recommend asking for advice as you order. They know better.

This is a very accomplished and dependable restaurant. Less than a year in, the Quality Chop House is fast becoming an institution. 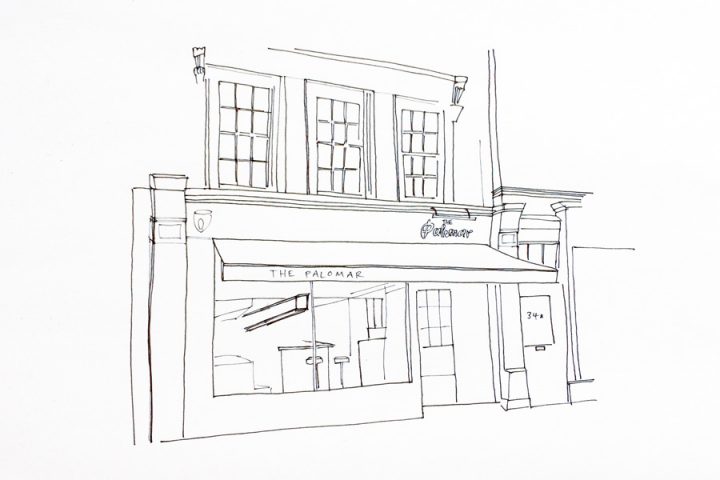 5 thoughts on “The Quality Chop House”