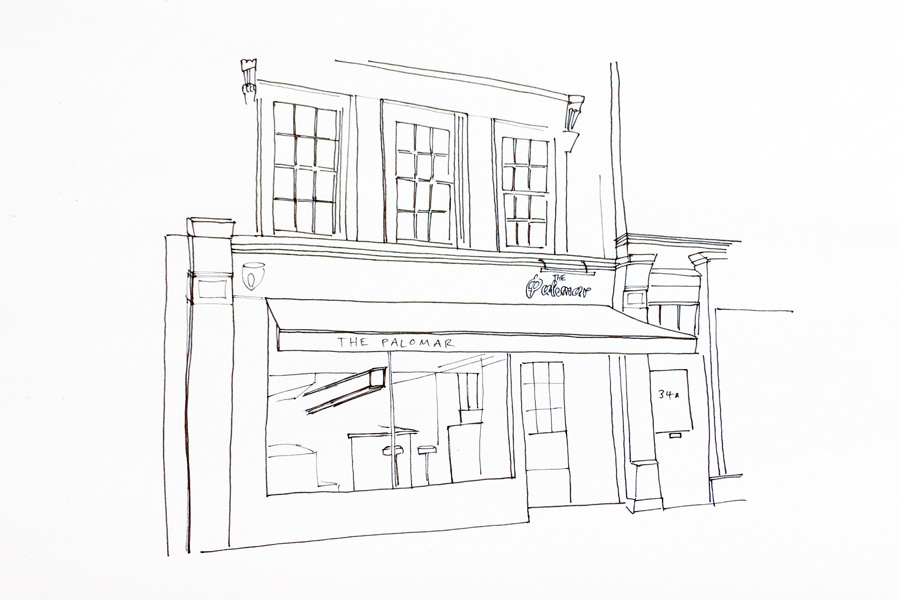 My Dad has a brilliant way with words.

That is not to say he’s a poet, or a man of such literary prowess that he ranks alongside the likes of Betjeman, Hardy, Thomas or Kipling. No, he’s more a Dr Samuel Johnson kinda guy: a pedant for accurate usage, and an extraordinary source (and sometime originator) of little known terms.

Those words are always sprung at an appropriate moment, yet they often confuse those around him. To be honest, it can be rather discombobulating, and it’s sad, I suppose, that the effect of telling your son off for being obstreperous is lost in a fug of laughter and Googling.

I particularly enjoy when he uses words correctly, but they are misinterpreted because common usage has affected general comprehension. For example:

His meaning: “the apple pie was very satisfactory, and I am complementing you”

Mum’s understanding: “the apple pie was OK, I suppose, but you could probably do better”

This all springs to mind because I wish to describe a recent restaurant meal as fine, adequate, satisfactory. But these days those words fall so far short of the hyperbole generally thrown at new eating establishments, that the meaning of them is likely to be taken negatively. In this instance, that is not my intention.

The Palomar sits on Rupert Street, on the Chinatown side of Shaftesbury Avenue. The broadcasters of press releases tell us that this restaurant comes from the people behind Machneyuda, one of Jerusalem’s “coolest”, “hippest”, “trendiest” restaurants. Anyone been?

This new London site features bar style eating in the narrow space at the front of the restaurant (a counter runs the length of the kitchen) and then a tabled area behind.

The entrance / kitchen / bar space is all whoops, hollers, “yes chef” and the occasional group shot of arak or something similar – what larks. To be fair, it’s relatively rowdy and fun and will suit couples happy to leave a seat to chance, rather than try to book ahead … largely because you can’t. I note they take the right approach to no reservations in that they’ll take your number and call you back when (if) space becomes available, leaving you to get a drink elsewhere if the wait is a long one.

In contrast to the bar at the front, the seated area to the rear is a fairly sedate affair. It’s comfortable and pleasant enough, though I can’t help but wonder whether their designers are also involved in ‘VIP’ areas for provincial nightclubs.

One London food critic has suggested that The Palomar is “maybe the most interesting restaurant experience out there just now”. I think he’s a long way wide of the mark, but the menu is certainly eclectic and, by and large, appealing. It’s small dishes to share; which for once feels totally appropriate. Choose three things each from the snacks, cold and hot sections of the menu.

We were tempted, but didn’t go for their ‘daily six’ meze. Instead, our meal began with a stumpy Kilner jar of ‘Jerusalem’ polenta. This is a signature item, apparently. In the vessel is a base of super creamy polenta, topped with mushroom, parmesan and asparagus, and probably a hint of truffle oil too. It’s extremely comforting and pleasing, but it’s served with more élan than it deserves. The great thing about truly amazing, sense stimulating dishes, is that you’re able to work out that they’re amazing all by yourself. A dramatic thrust under the nose and a demand that you sniff away falls a little flat.

A tender octopus, chickpea and spiced yoghurt salad follows (Polpo à la Papi Mulukhiyah), and goes down very well. Ditto a simple but light and zingy spring salad of kohlrabi, asparagus and fennel, which is dressed with good, salty, feta vinaigrette. Then back to the hot items.

Shakshuki is a plate of a tahini laced puree (are there chickpeas – is it hummus?), topped with mincemeat, four aromatic chutney style splodges (I got preserved lemons, chilli, plenty of other spices) and yoghurt, with a flat bread on the side. This is certainly tasty and better than your average ‘deconstructed kebab’. But falls behind, in my mind, a delicious tagine featuring a slab of caramelised, giving, rolled pork belly with ras el hanout, sticky dried apricots and Israeli couscous.

Kurdish style mussels with fennel, courgettes, swiss chard, Arak & lemon butter is also a total win. This really is interesting – the plump molluscs are set off nicely in a stock that shows there’s more to steaming shells than the Francophile standard of white wine, beer or cider.

The only bum note on the food front is a dish featuring lamb sweetbreads, cut so thin and cooked so dry, that they are devoid of any real taste, let alone pleasure. The rest of the dish is forgettable. For 10p less you get gland Nirvana at Lyle’s.

I rarely mention beer (the last time was probably The Lockhart), but it’s worth noting that The Palomar reminds us it’s not just about American and British craft ales. If you see the embossed green bottle of Alhambra Reserva 1925 on your travels, send one my way.* Think smooth barley notes rather than the intense bitter hoppiness we’re increasingly bombarded with.

Finally, it’s worth saying I liked that the names of the wait and kitchen staff are mentioned on the menu. Superficially, this is a nice touch. More significantly, though, it appears to reflect strong team values that will ultimately make our experience as customers better – all the staff we interacted with were friendly, competent and seemed proud to be involved.

So there we go. The meal was fine: service, food and atmosphere were satisfactory and, for what felt like a fair price in the round, we left adequately sated. Take what you will from that, but none of those words are negatively meant. In terms of a Middle Eastern food offering, The Palomar suffers by comparison to Honey & Co, and there are many, many other places that are better designed and naturally hipper. But, no, really, it’s fine.

The Palomar in 3 words

Felt reasonable. We left for under £40 a head, including drinks and service.