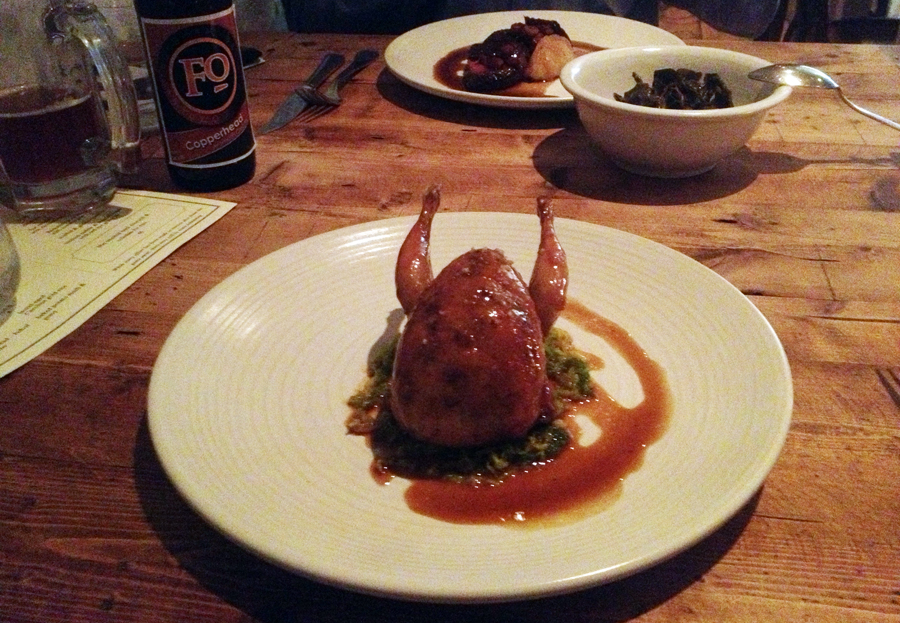 Update Summer 2016: The Lockhart is now closed. Head to Shotgun in Soho.

Two weeks in Colorado before Christmas delivered no restaurant food of note (though I wasn’t really looking). There was, however, plenty of excellent craft beer. Keep your eyes open for ales from Great Divide Brewing Co., Odell Brewing Co., Avery Brewing Co., New Belgian Brewing, Breckenridge Brewery … basically, anything in a bottle or can with the words ‘Brewing’ or ‘Brewery’, probably a ‘Co.’ and definitely the the state handle ‘CO’.

Instead, it has fallen to a restaurant in Marylebone to provide me with a refreshing taste of US cuisine.

This week, a chef called Brad McDonald began his tenure at the Lockhart on Seymour Place. I’ve no idea what was there before, but I do know that McDonald had built a decent reputation in New York before his restaurant, Governor, was taken out by Hurricane Sandy. He headed up the kitchen over here at Casa Negra when it opened (I’m reminded of a night of mostly pretty good, authentic Mexican food, but bad prices) and I know he’s tapped in to and held in high regard by young chefs involved in the global networking groups and showcases like Cook it Raw, MAD and Omnivore.

The Lockhart’s menu appears to be inspired by the Southern end of Americana. Lunchtime offers catfish po’boys, muffaletta, shrimp and grits and fried chicken. There’s mention of collard greens, corn bread, gumbo and more of that shrimp and grits for dinner. Yet another Man vs Food ape? Do they do burgers?

This is not a fairground imitation of a fast food diner. The room is stylish but not over trendy; it’s informal but smart enough for the area. The dishes named above appear to be reference points for McDonald’s (Brad, not the Arches) fairly modern interpretation of food from the Jim Crow states. So, on closer inspection, the pleasingly succinct 5 starter, 5 main dinner menu crosses Southern with what feels like British or at least a modern northern European approach. It’s fully aware of local ingredients – no turtles or gaters over here. ‘Red eye gravy’ is served with venison saddle and roasted apple puree; ‘deviled’ (good ol’ US English) egg sauce accompanies hot smoked mackerel; ‘dirty rice’ is mixed with quail offal and stuffed back into the bird.

Enough foreplay. What did we eat?

The honest answer is probably too much. I kinda know members of the kitchen team and they sent out a few tasters to keep the calorie count ticking over at Christmas levels. For full disclosure, I suspect this affected my view of the place – because pretty much everything we had was very good.

I’d certainly order the grilled chicken oysters with yellow mustard BBQ sauce as a starting snack again. Naughty little lollipops. Ditto the mallard gumbo over beautifully silky Carolina gold rice as a starter. This was as good an example of gumbo as I’ve had. A dark, earthy roux, lifted and sweetened by light shavings of smoky mallard jerky – which was like pork candy floss for grown ups.

Looking back, however, it was the ‘entrées’ section that supplied the evening’s outstanding food. We were sent a taster of shrimp and grits. I wouldn’t have ordered this but, having now tasted it, I would take it again in an instant. The grits were not of the wallpaper paste lumpy hominy slop kind I’ve passed on in the past. Think, instead, of a soft, ultra cheesy bowl of polenta served to you by a generous Italian nonna. Then cover it in rich braised meat, plump prawns and the highs of a few liberal dashes of Tabasco. Y’all, this is a cracking dish.

But it’s in a fist fight with that dirty rice stuffed quail and the very good saddle of fallow deer, bacon, apple puree and red eye gravy … and it probably loses. The latter two plates showed that the Lockhart is quite serious, actually.

The quail was just pink, moist and tender, its innard fluffed stuffing no gimmick, the glaze sweet but mellow. Possibly a Madeira job? The venison was blushing pink and delicate. Is fallow deer the most tender and fine of all the deer? These slices seemed to suggest that to be the case, though might’ve taken a touch more salt. Red eye gravy, by the way, is made with bacon dripping, and this rich version is infused with coffee.

Collard greens came near stewed in a full flavoured pork broth and, I think, mixed with something akin to sauerkraut. Freshly baked corn bread was awesome – enriched, almost suet pudding like. The only flaw in the fixins was a potato mash that seemed curiously glutinous for one stemming from a baked potato. An over eager chef beating away before the steam’s gone, perhaps.

Just one other bum note: we got sent some fried chicken, which is not on the dinner menu but, as mentioned, a lunch thing. I have no complaints with the sizeable, moist and tender thigh meat and drumstick, nor the crispness of the batter. However, fried chicken feels incongruous alongside the rest of the food on offer. Do a riff on SFC if you must – say, alongside the oyster snacks – but the rest of the food is on a higher plane.

Lemon pie ice cream sat in the middle of a ring of soft meringue, lemon curd and scattered crumbs – and sent us over the edge, though we had no regrets. What else? Service was good – there were many empty seats. There’s no reason to suggest busier nights will be less competent, but those challenges await. I didn’t look at the wine list, though did spend time on the beer section, which featured a number of new (for me) American ales. I had just the one: Fordham Copperhead. A stonking, caramel coloured and tasting, lightly hopped ale … forget what I said about Colorado beers. I’ve seen the future, and it’s amber.

This feels far too effusive for the first meal of the year. Have I lost perspective after nearly a month away from eating out properly? Doubt it. Was I swayed by those extra dishes (lets call it the oysters, shrimp and grits, corn bread and dessert)? Only in that they demonstrated that most of the food is very enjoyable.

The answer, I think, is that The Lockhart is basically a good’n. It gives us something pretty unusual for London – modern Western cooking from a fresh, non European perspective; a hint of genuine, slow, American cuisine without cliché or too much deep frying. This is comfort food that’s flavourful and unchallenging. And ain’t that darn tootin’.

The Lockhart in 3 words

As mentioned, we were sent a number of freebies. Still, it’s good value and portions are decent, particularly the sides – £4 buys a fair amount relative to common practice. You could have your absolute fill for £35 per head on food.

I was pleasantly surprised to find that the Lockhart are currently running a 30% off food offer. This continues until 18 January.

One thought on “The Lockhart”