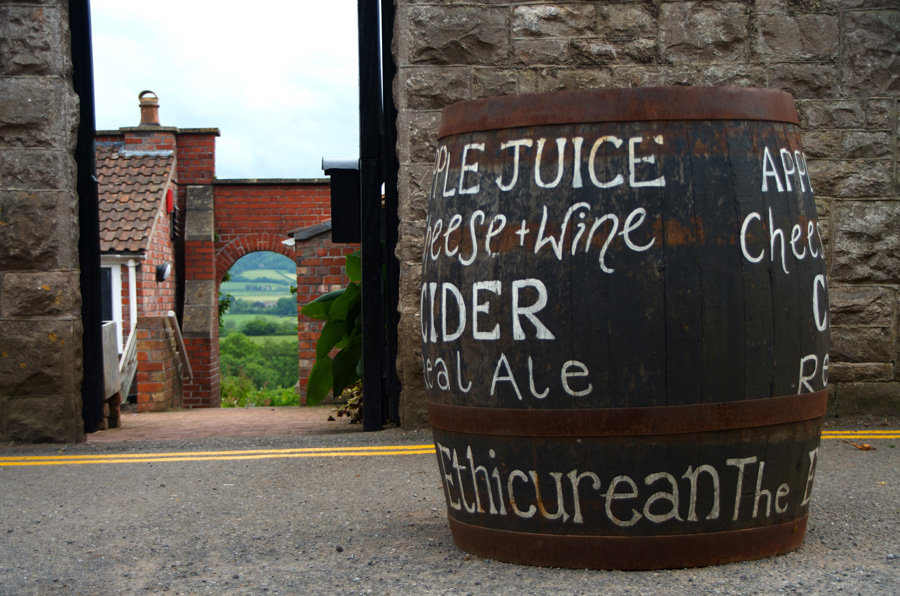 In a setting like this, they could serve cheese sandwiches, tomato soup and lemonade and they would still have the same throng of gushing customers ( “wonderful” – “so good” – “never knew it was here” ) promising to come back soon and asking for their just purchased cook books to be signed.

Though if they took that approach, I imagine the cheese would be a local cheddar and its accompanying chutney and bread homemade, the tomatoes would have been plucked from the greenhouse outside that morning, and the lemonade would actually be rhubarb or elderflower based … because they don’t use citrus fruits as they prefer to use the acidity found in British ingredients.

If that all sounds sickeningly bucolic, it is: I am puke-green with envy.

Envious of the 4 friends who own and run The Ethicurean, envious of the beautiful walled garden that the restaurant sits in and the access to the organic fruit and vegetables that come from that garden, of their view towards the Mendips, of the open kitchen and charming, welcoming, conservatory based dining room that exposes the customers to all of those things.

But, you know, envy is an ugly sin and I’d rather focus on the positives of a quite lovely, relaxed and relaxing lunch at The Ethicurean last week.

The restaurant sits in the top corner of a quite magnificent walled garden. Parking in the overflow car park (in a field) and walking up, past the polytunnels, the quaint vegetable shop (in a shed), and through the garden provided a zen like start to a charming meal (in a greenhouse). It’s an entrance that few can match. I defy even the most preoccupied businessman to walk the same path and still be thinking of work at the end.

The inside of the two adjoined Victorian glasshouses that make up the restaurant is, happily, casual, organic and homely, rather than corporate or overdesigned. Dried meats hang in various parts of the bar and open kitchen area because that’s where they’ve the room for them. The dining room itself is a simple whitewashed conservatory. The view provides most of the artwork. Each table was populated by happy groups – some celebrating birthdays, early retirees out for a long lunch, and, later, a local vicar with a coffee and cake group. The Ethicurean’s crowd is reassuringly normal.

I regretted not ordering their hunk of rarebit and accompanying freshly picked salad as a starter. It looked superb but I’d felt the need to try their more dainty stuff. If I lived more locally and ate there more regularly, both the rarebit and the ploughman’s also on the lunch menu would be dishes I’d snap up in a hurry, along with a glass or two of scrumpy.

Instead, a beautifully balanced gin, bitters, rhubarb, elderflower and ginger beer cocktail proved to be a refreshing little sharpener and a salad of bitter chicory leaves, earthy yet sweet goat bacon, pickled roots, a vinegary jellied dressing and coriander salt crunch impressed as a well balanced dish, full of interesting flavours and textures. The salad looked great too – though I’m not a huge fan of eating off slate. Cucumber, asparagus, ewes curd, sesame crunch and borage flower was a similarly dainty starter. I would have loved it to have been heavier on the asparagus and lighter on the cucumber, but a forkful of all the flavours was top notch. A good way to pretend that we’re actually having a summer.

Pork belly with pickled apples, spring greens, mushroom and a chipotle salt crunch was the pick of the savoury dishes. Proper comfort food with a bit of invention thrown in for good measure. A confit duck dish had already gone by the time we ordered, so I tried an intriguing sounding ‘smooth hound and ling in turmeric and spiced tomato and fennel soup’ for my main. The fish was delicious and stood up to the heavily (but not heavy handedly) spiced soup. But it was mighty filling – very rich and a little too thick – and I reckon better suited to a starter portion. I would have loved to have stayed to see and taste the food in the evening when the daily changing menu drops in a few more restauranty dishes. Next time.

Desserts were killer. A return visit for the sweet course is only required because I wanted everything but had the stomach to share just two. We chose their chocolate and salt caramel brownie (one should always quality check these things) and a rhubarb and apple steamed pudding with anise sherbert. The brownie wasn’t really a brownie at all, rather it was similar in texture to a River Cafe chocolate Nemesis. Which is no bad thing. Accordingly, that dessert was dark, moist, fudgey, salty and sweet. Awesome. The rhubarb steamed pud was warming, sticky and delicious. The sherbert provided a sour tang. Super stuff.

You could imagine a Mugaritz or a Roganic in this kind of setting; an ambitious fine dining restaurant revelling in its locality, but unaccessible to most. Thank goodness, though, that The Ethicurean is not trying to be that type of place. There’s an attractive naivity to the young, self trained chefs, learning by doing in a restaurant they started from scratch just three years ago. That they’re able to push the sustainability message without alienating and offer a youthful cocktail list and interesting and innovative dishes, whilst remaining affordable and unpretentious (I refer to the vicar’s coffee group) is impressive and affecting. It’s a special, yet totally normal place.

The Ethicurean in 3 words

£40-45 a head as a 3 course meal and a few drinks. Could spend a lot less – if I lived nearby, I’d drop in for a rarebit and salad or a well stocked ploughmans and a glass of cider and walk out having spent £10-15.