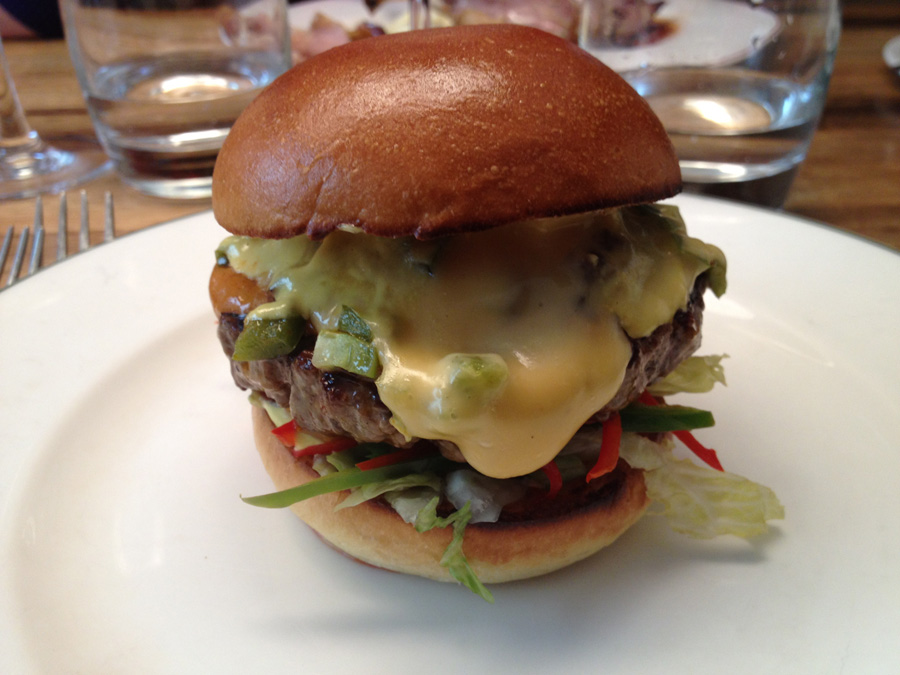 Update 2016: Fred Smith became head burger man at Byron. No idea how The Admiral Codrington is fairing, or how their burger is.

This review is 80% about a burger. This is unusual for me. Unique, in fact.

It’s not that I don’t like burgers, or that I haven’t eaten many over the last two years of self-publishing my drivel on the internet. Far from it: a good burger is a very enjoyable thing and I consume a fair number. I’ve just never broken one down online.

There’s no agenda behind that omission. If I had to reason why burgers have not featured here before, I suspect it’s because I tend to order other items where burgers are not the dominant part of a restaurant’s menu, and, in respect of the increasing number of good burger vans, joints, chains and pop-ups in London and beyond, I generally decide that I’ve nothing to add to comments all over the net. Other people are far more enthusiastic in their analysis of meat patties in bread rolls than I am, so have a scan online and fill your boots with burgerporn, if you want: Burger Anarchy is probably my favourite of the blogs devoted to the theme; Burgerac and Burgerme are also notable for their devotion to the cause; and the anally retentive in me likes how Daniel Young has a list.

Thing is, I’ve just come back from an enjoyable lunch with friends at the Admiral Codrington in Chelsea. And I had a burger, which was very good. Very good indeed. So that’ll be the focus of this piece.

The ‘Ad Cod’ is a pub with a fairly smart dining room round the back of Sloane Avenue. The chef, Fred Smith, has become fairly notorious for his burgers; his desire for consistency being so great that he’ll only serve a burger at lunch, when there’s less pressure on the brigade*. There’s always a cheese burger, which appears to be highly rated, and often a special burger too. A recent special was the ‘Double Cheese Stack’ which looked absolutely killer. Literally.

I flirted with the idea of the standard cheeseburger, but in the end opted for the current special – a chilli burger.

There was a bun. Some cheese. A special sauce – a kind of mayo, maybe chipotle flavoured, with hints of the Golden Arches. Strips of fresh chilli provided a nice heat. And there was a thick patty that was bang on medium rare. I’m getting the hang of this burger review thing, right?!

Bottom line is that this was a tasty burger. Whisper it, but I’d go as far as saying that it was flawless, borderline exceptional. I don’t doubt the standard cheeseburger is on a similar level. I would have preferred fries to the decent but marginally under-salted thick cut chips served with it. But that’s the only criticism of the dish. At £15 there are cheaper burger and chips out there, but I was happy to pass the cash over.

Other dishes are available. One friend said he was happy to have had the fish and chips over the burger, (I’m not sure I believed him), another loved her confit duck (served with a smart looking pomme purée and a cherry sauce), and my third companion suggested he enjoyed his generous portion of lamb shoulder, but I could tell he was totally sick with envy. We had shared some mini sausages, olives and salted and chilli battered squid earlier on in the meal. All were decent, none streched gastronomic boundaries (not that they claimed to). A triple chocolate brownie was far too light, spongy and cakey for my liking, but the milk ice-cream served with was good.

Anyway, That’s quite enough on ‘other stuff’. It was really all about the burger.

The Admiral Codrington in 3 words

Our bill for enough food and booze for 4 came within a penny of being an OCD sufferer’s dream – £123.46 … Starters are in the £6-8 region. Mains generally £14-18, steaks and some fish more. Burger £15. Can’t remember re dessert. Wine list and beer reasonable.

*I thought this was the case, but it has been suggested they’re available for dinner too. Am checking & will update when I know.

5 thoughts on “The Admiral Codrington”