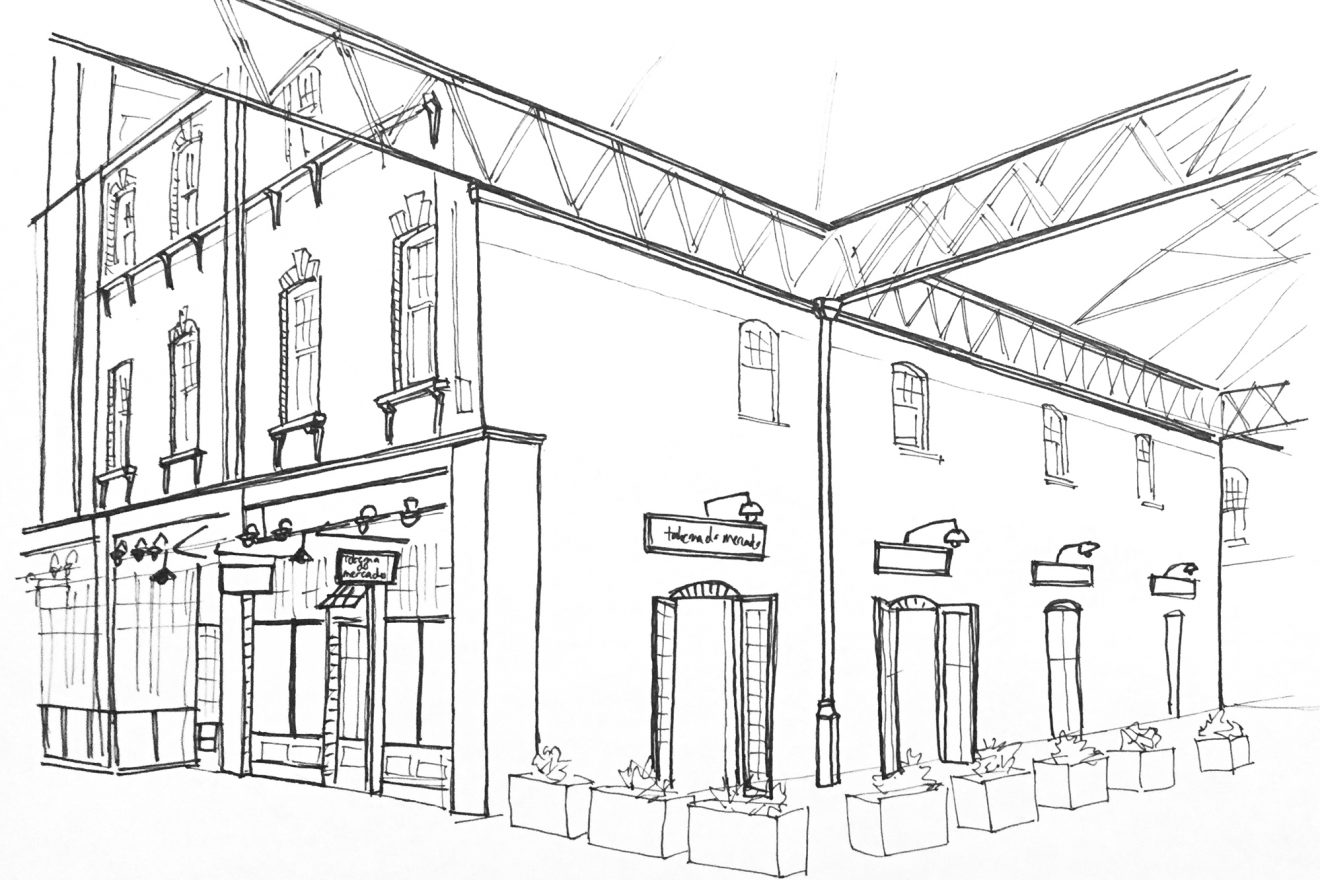 It’s not the done thing to ‘review’ a soft launch.

The reasons are multiple and obvious. Not least that the kitchen won’t have hit the ground, let alone started running; and to publish thoughts on somewhere you’ve been when it wasn’t properly open, is just super hyper embarrassingly keen.

But in this instance I’m happy to admit that I am keen for it.

Moreover, the write-ups on this site don’t deign to be ‘reviews’ or ‘critiques’. I leave that to those clever types who manage to get paid for their work (and have to adhere to a word count). No, these are just waffled observations about food, restaurants and events that I think are worth sharing. Rarely edited, never brief, and (I hope) technically outside the ‘only when it’s actually open’ rule.

The restaurant in question is Taberna do Mercado, which sits just inside the first courtyard of Spitalfields Market if you enter from the Commercial Street arch. It’s a small, light, relatively bare (and clattery) room. Look closely and you’ll see the finish oozes quality and considered style. There are just 30 or so seats inside, but tables and chairs in the area outside add numbers. That covered space will be coveted over the coming summer and beyond.

This is the new venture by Nuno Mendes – most recently of Chiltern Firehouse fame (don’t worry A/Z listers, he’s still there too), but more excitingly the creative, collaborative and all round good egg behind Viajante, The Corner Room and The Loft Project. His hand is definitely at the tiller, though it feels like a guiding, mentoring one, resting mostly on the shoulder of the Head Chef Antonio Galapito. I believe Galapito worked at the latter three restaurant/supper club ventures just mentioned. Significantly, he and Mendes share a common bond in that they both grew up in Portugal.

Significant because this restaurant is Portugal … albeit a Portugal we’ve not tasted in London before. It’s St John Bread and Wine or Lyle’s reinvented with Iberian rather than English flavours (and racier plates); Morito with more room and ambition, and a slightly different geographic reference; and/or any of the Portuguese places around Vauxhall, made 1000 times better and dragged into modern, globally influenced cuisine.

The menu breaks down into snacks, meats and cheeses, house tinned fish, small plates, sandwiches and desserts. Construct your meal as you wish – I think you could probably eat or graze well here in a hurry, or (as we did) lounge and glutton for a while.

We began with a crisp half of Super Bock and a share of a runner bean fritter (a lighter, greener, better version of an onion bhaji, which sat like a nest over a clam broth), and some prawn rissois* (in the best possible way, these are mini Findus crispy pancakes with a rich prawn filling of an almost brown crab meat quality). Two plates of exquisite cured meats followed. I think both started life as muscles from prized black hoof Iberian pigs reared in Alentejo, an area just to the north of the Algarve. At the risk of sounding like Jay Rayner, copita (coppa) was beautifully marbled and served at just the right temperature to let the fat melt on the tongue and carry the strong, near sweet porkiness through to the back of the mouth. A plate of paleta porco preto, thin curls of pork from the shoulder, was even better. So much flavour concentrated into so little. Soft and yielding, yet with bite. The best air-dried ham I’ve had for some time.

Next came house tinned fish. I like the idea of these: well-sourced fish matched with interesting flavours (turbot and dulse oil; Queenie scallops in brown butter and walnuts), cured, cooked and canned on site. But while the result of that work is beautifully presented and fine tasting, we felt it the kind of thing more appreciated by the chefs lovingly devising and preparing the tins, than the end user wolfing it down.

The small plates, though. Jeez. No one, however bothered by the process and complication (or otherwise) of cooking, will be unappreciative of these.

Chicory leaves and mandolined slices of pear came coated in a striking, orange massa de pimentao, a smoked and slightly spicy paprika, and oil dressing. Almonds flakes added a different kind of bite, pink pear blossom mostly just a change of colour. Strong. I also loved a small plate of peas and broad beans, which sat in a slick of egg yolk. The greens had merely sniffed a little hot water, if any warmth at all, and were dotted with some refreshing (chocolate?) mint leaves. There were fried bread crumbs for crunch too. Bright yet comforting. Perfect for May.

It’s surprisingly rare for a small plate meal to crescendo without pause or regression, but things kept getting better as the plates warmed up. Pork tartare – seared but definitely still raw – sat in a deliberately tepid, clear but strongly flavoured pork broth. Cabbage and rapeseed flowers added a little bitterness, grassiness and pepper. After this, a couple of perfectly cooked, mild but meaty hunks of a white fish known as corvina, came simply dressed in a grassy olive oil and sweet pepper salsa (who knew green bell peppers could actually be good?).

A scattering of wild garlic and coriander flowers couldn’t hide the fact that slow braised cuttlefish and pig trotters is mucky brown food. But this little dish sticks two fingers in the face of those of us who spend too long snapping and not enough time enjoying the eating part of a meal. This dish was soft, salty, packed with deep flavours that were lifted and cut through by the herbaceous flowers. So good. The least pretty yet best tasting dish of the lot. There’s something in that.

Though already sated, and mostly well watered too (via the Portuguese heavy wine list), we shared a couple of desserts to finish. An olive oil cake/soufflé/collapsed fondant was a fun and visually appealing pud to share (get that camera phone out again). But I much preferred the pig fat, egg yolk caramel: a thin, glossy yellow slice, set somewhere between a firm jelly and a hard baked cheesecake or fridge cold torte, which sat in a thin, spiced port sauce. The ‘pig fat’ bit is no joke. It’s basically pork belly pudding. And it’s wicked. Soooo, yep, pretty keen on this one. I hope you will be too. You can now pass more legitimate and considered judgment than I, because it opened properly last night. Lunches are bookable, but you’ll need to chance dinner by walking by and quite possibly queuing up.** It’ll be worth it. Soft launch or not I’m calling it: alongside Bao, Taberna do Mercado is the best opening of the year so far.

* Portuguese speakers will note I’m missing a host of slanted and squiggled accents in this piece. I looked, but failed.

** You could always grab a Bleecker burger whilst you wait; or if you don’t fancy hanging on, St John Bread and Wine is over the road; Blixen and Wright Brothers round the corner; and the Culpeper and original Hawksmoor are short trots away (in opposite directions).

Taberna do Mercado in 3 words 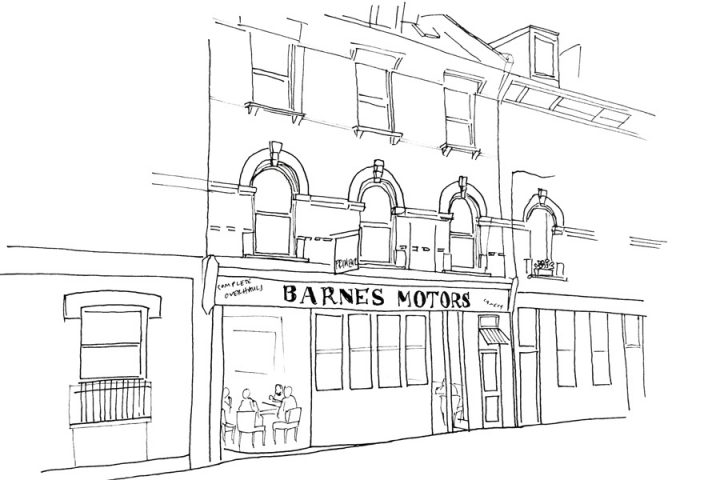 2 thoughts on “Taberna do Mercado”