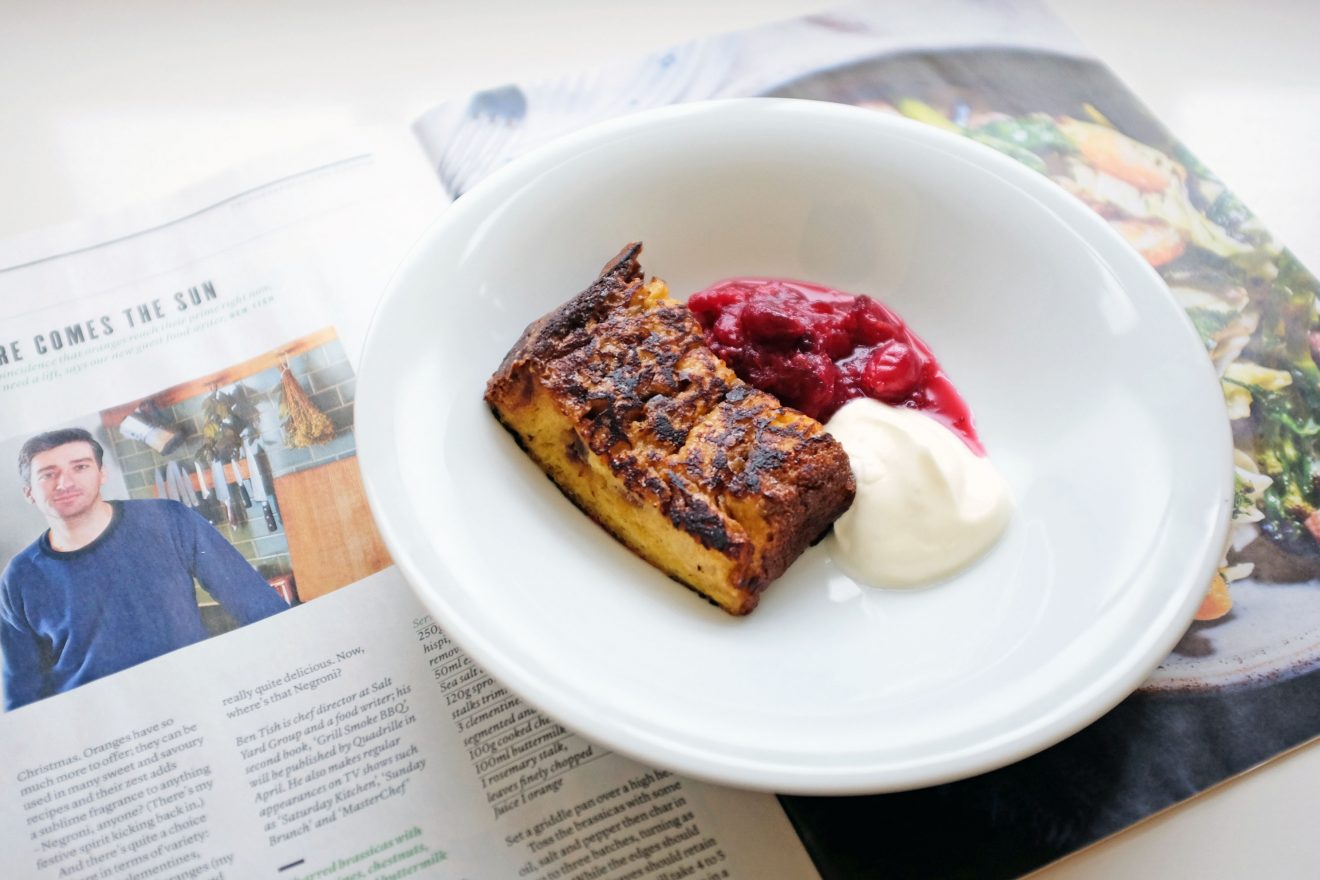 Ahhhhh yes, the first weekend in January – how I look forward to thee.

It’s that time when we’re told to flagellate ourselves over the excess of recent weeks, and promise to eat only quinoa and the first quartile of milk from cold pressed gymorexic semi skimmed mung beans.

Except this year, happily, most of the writers and editors preferred to go with a vibrant, fresh feel AND taste good theme, rather than a deprive yourself crash diet vibe. If they hold out for another week, I think we’ll be through the worst of it.

A good start to the year

Ben Tish is the Independent on Sunday’s new guest chef. I enjoyed his bold, punchy orange centred dishes – all of which are exactly the kind of thing I’d like to eat right now: a charred brassica, clementine, chestnut and buttermilk salad; duck breast with orange and chicory; goat’s cheese cheesecake with amaretti and blood orange (arriving in a week or so, I’d wager).

I imagine Anna Jones’ warming, fragrant and spicy sweet potato, green peppercorn and coconut noodle broth is relatively healthy. More importantly, though, it also looks to be packed with flavour. Seconds and thirds would be on the cards. (In the Sunday Times magazine – so you’ll need a subscription to see it).

The Honey & Co duo’s saffron pear and chicory salad with walnut tahini in the FT will be OK for calorie counters and care free eaters alike.

And if you’re looking for sharp and light, Kylie Newton’s Guardian Cook residency should help you out: this week, sea bream ceviche with celariac and beetroot pickle. Follow it with a burger (for which I suspect she’s got a chutney or two).

Yotam Ottolenghi wipes the slate clean and starts the new year with a selection of light and zesty ideas, like an orange, fennel and much herb salad; and a caper, hard boiled egg and pine nut salsa to go with salmon.

In the same Guardian magazine, Thomasina Miers completely ignored both diet fads and aspirational ingredients and focus instead on what’s actually likely to be in the fridge the weekend after Christmas and NYE: cheese and cream. I’d shovel down a blue cheese leek tart, though am particularly taken by the rosemary, almond and honey parfait. Proper.

Finally, of all our apparent food worries, an excess of sugar is definitely the one to be serious about. Good to see Sue Quinn’s naturally low sugar sweet options in The Sunday Times’ ‘The Dish’ supplement. Peanut butter cookies will do nicely, ta.

It could be argued that the weekend’s best recipes and columns were those that paid next to no attention to the passing of the year.

How about, for example, Mark Hix on dumplings is Saturday’s Independent? Black pudding XLB(ish); Herb soup and parmesan dumplings; and venison cobbler. Oui.

Was Anna Tobias’ pumpkin and porcini panade the best recipe in The Dish? Quite possibly. Though I quite liked Martin Wishart’s scallops with toasted oats, bacon and chive oil too.

Not as much as I liked Nigel Slater’s porridge recipes for Observer readers, though. I’m glad he stressed that the key to good porridge is to keep stirring, and also that he proposed using spelt and barley in a porridge with berries and yoghurt (rather than oats). Mostly, though, I suggest you have a scan of the warm porridge cakes with orange and chocolate granola. Pudding or breakfast? (Both.)

Thumbs up for Rachel Roddy’s spaghetti with lemon, parsley, garlic and chilli in Cook – one of my favourite mid week cupboard suppers.

Round of applause for Claire Thompson’s four amaretti recipes on the same pages: orange and amaretti yoghurt; amaretti and pumpkin ravioli (YES!); chicken with amaretti pangrattato and radicchio; and plums and amaretti crumble. Gorj.

And wild cheers for Claire Ptak’s clementine and ricotta fritters, also in Cook.

Soooooo, the many pages of Bear Grylls in The Dish point to the fact he’s got a cook book out. Dare I be so adventurous as to suggest this looks like a feat of celebrity over chef? Ignore.

The Telegraph’s ‘Stella’ magazine was probably keenest to run with the healthy eating theme, choosing this weekend to launch Amelia Freer as their new food columnist / nutritionist.

Also on The Telegraph’s pages: ‘how to heal your gut‘ (start milking those cashews, apparently – just like cows but smaller udders). Though my eyes were drawn to Atul Kochar’s Bangladeshi green chilli goat curry – which, by wonderful coincidence, might be the most effective gut cleanser of all.

I keep seeing punterelle at my local greengrocers but haven’t had a moment / the gumption to pick one up. This Bon Appetit recipe for Italian wedding soup will probably change that – it looks and sounds ace.

Also, it’s pretty essential that you look at Helen Graves’ top 5 recipes of 2015.

Thomasina’s ‘seriously, we need to look at the fridge situation’ plan is a good one. I did exactly that and found a bucket of cranberries inside, plus masses of eggs and panettone next to it. French toast with Campari cranberries it was, then, taking inspiration from Claire Ptak’s recipe a few weeks ago where the custard soaked panettone is baked for a bit in the oven, before a second soaking and fry.

Three helpings people. Three helpings. Stick me in the oven on low for 6 hours, basting every 45 minutes or so. Maybe a detox wouldn’t be such a bad idea after all… 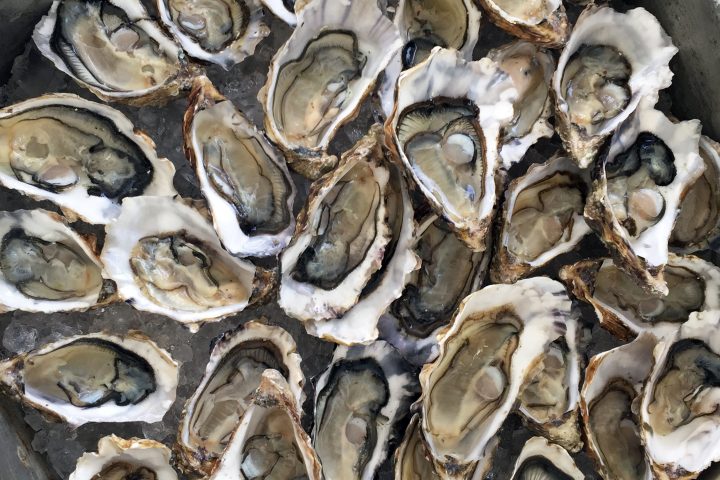 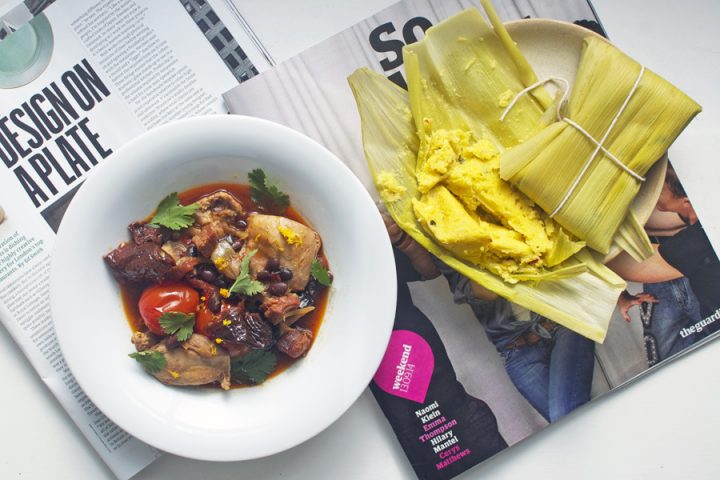