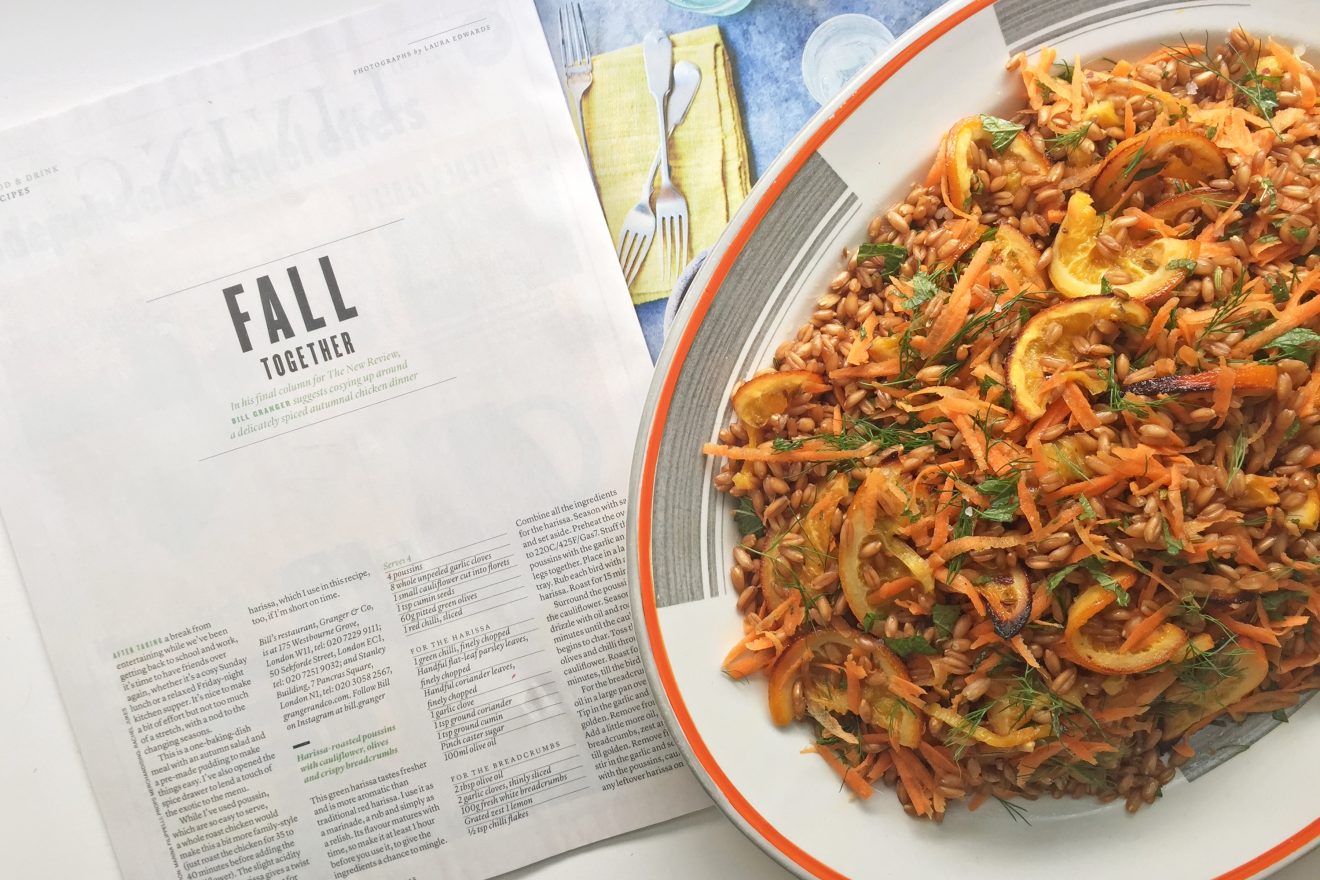 Perhaps I haven’t thought hard enough, but I couldn’t fit the recipes into themes this week; so the run down is by newspaper group.

Let’s start with the FT and their succinct, focused, one magazine, one recipe approach. I wonder whether the cookery writer feels more or less pressure when there’s just a single chance to shine? Probably the former.

There was no shirking of responsibility this weekend – the Honey & Co. couple, Sarit Packer and Itamar Srulovich, more than delivered via their aubergine and jeweled rice salad. In their intro they write about the enjoyment they get from sharing their best recipes, and then give us the tahini-soy-BBQ sauce they use on a number of their dishes in the restaurant, suggesting this time that it’s spooned liberally over roast aubergine and squash. Ding dong.

The Indy also take a ‘less is more approach’ to food (and supplements), though they do allow their writers more than one recipe.

Big news at Lebedev Towers, mind, as hidden in the small print of Sunday’s magazine was a little note stating that this was Bill Granger’s final cookery column. No indication yet as to who will replace him. I guess we’ll see over the next few weeks.

Whilst we’re on the subject of wild mushrooms, I was drawn to a recipe in ‘The Dish’, The Sunday Times’ monthly food magazine included a porcini gratin recipe by Swedish uber-chef Magnus Nilsson. It looks and sounds lush, but it probably caught my eye because it was pimping ceps. For me, these are the king of mushrooms. The good news is they’re in season and around at the moment. The bad news is they cost much dollar – about £33/kg. So the 600g required for this recipes is £20 of shroom.

I’m not noting this as a criticism. But does pose an interesting question: it’s easy enough to find ourselves spending £20 on meat for a special lunch that feeds a few mouths. We’d certainly stop and think about value, but many of us would decide it’s OK. Swap that meat for ceps, though, and I wonder what proportion of people would get as far as the till, balk at the price, and turn back and swap with chestnut mushrooms instead?

Florence Knight’s recipes in the same magazine were all apple themed. I liked the look of an apple and custard tart – a much quicker and higher temperature cook on the custard than I’m used to (on which, see Felicity Cloake’s recent custard tart in her ‘Perfect’ series). And I loved the idea of a burnt apple puree alongside pork belly and a broth.

Best of The Sunday Times’ many recipes were Anna Jones’. Baked rotolo will be an excellent dinner party number (prepare ahead crowd pleaser). Ditto the blackberry, bay and honey tart. I also thought orzo with fennel, almonds, capers, black olives, and a bread-thickened sauce was a really smart idea.

Saturday’s Times readers got four things to do with fennel and various pork and lamb recipes by Donna Hay. I was keen on sherry roast lamb leg, pomegranate lamb shoulder and roasted garlic and harissa lamb shoulder. Not all at once, mind.

Saturday’s Guardian Weekend Magazine celebrated Nigella. How nice to learn about and see pictures of the real, rather than ‘the new’ Ms Lawson. She wrote evocatively of the evolution of her eating since the 1960s. Risotto Bolognese, passion fruit pavlova and warm spiced cauliflower salad with pomegranate seeds were all tempting and all felt very her. Good piece.

… assuming you can fit it into your week, bearing in mind Tommi Miers’ black noodles and prawns; and Korean style chilli picadillo. Oooft.

Loads of good stuff by the Guardian ‘Cook’ team (as per usual). I felt Henry Dimbleby and Fuchsia Dunlop’s Chinese home cooking beginners guide was particularly good. Nothing new in it (red braised pork; Sichuan aubergines; smacked cucumbers), but such a good prompt. Of four pineapple recipes by Kitchen Cooperative, I was swayed most by, roasted pineapple with ricotta and honey ice cream; and their pineapple coconut ‘bakewell’ tart. The sweet toothed among you will also enjoy Ruby Tandoh’s saffron poached pear brownie tart.

There was another OFM ’20 best’ supplement too – this time on British food. I didn’t catch the content, but it’ll be drip fed on to their website during the course of the week.

Rose Prince’s autumnal recipes for Saturday’s Torygraph readers were great: venison bresaola with honey roast roots; spiced pigeon breast with dal; and apple jelly treacle tart is a decent enough weekend menu on its own. And Heidi Swanson presented a bunch of vegetarian recipes, covering a variety of cuisines.

When Nigella tweats “#recipeoftheday: girdlebuster pie”, you click on the link. Go on. Try it. You’ll see that click and glorious pie name yields chocolate and digestive biscuit base, coffee ice cream filling.

Make one tonight, people – and stick it in the freezer in preparation for your next break-up.

It seemed appropriate to cook something from Bill Granger’s final column. I can confirm that the spelt, roasted spiced oranges, carrots and herbs (dill and mint) is a cracking recipe – and will sort me out for lunch for the next couple of days.

Subscribe to the Rocket & Squash newsletter for fortnightly emails. These bring together the latest blog posts, plus a few other things from elsewhere that you might find interesting. (Next one should be out on 13 October). Sign up using the envelope button at the base of the site. 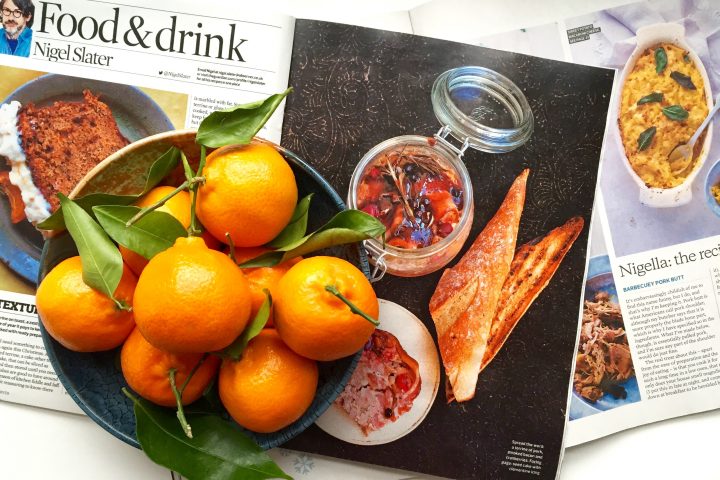 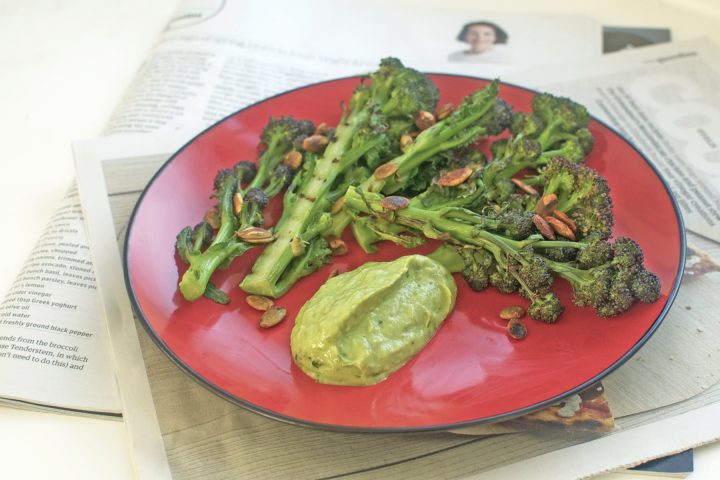