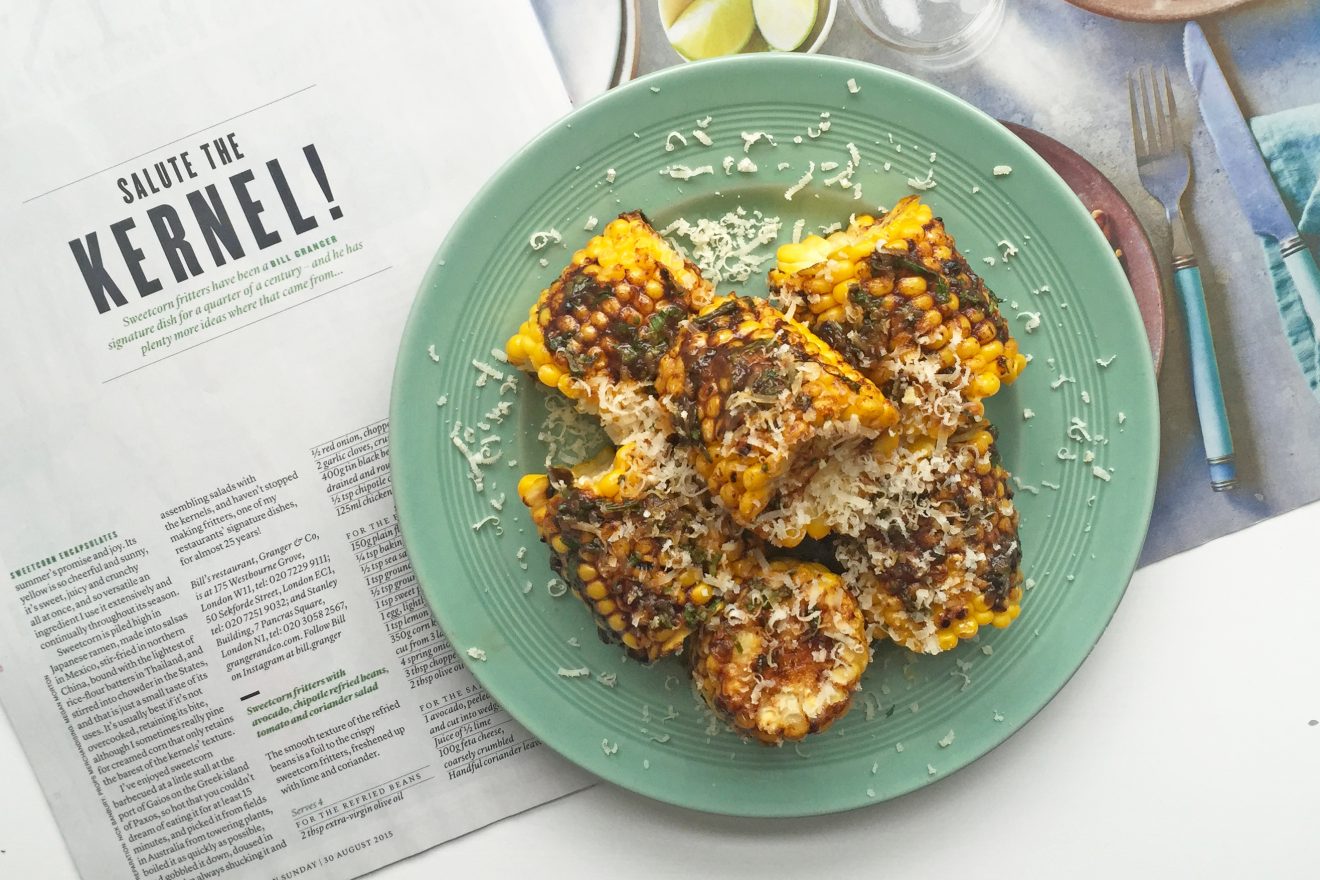 No rest for the cooks – the Bank Holiday weekend recipe pages were as full as ever.

In noting that he’d been making sweetcorn fritters for 25 years, was Bill Granger staking a claim on having invented them? Good on ya, mate, if you did. His Indy on Sunday column included a recipe for these, along with a good looking crab, potato and corn salad, and miso and paprika butter grilled cobs.

Russell Norman (of Polpo fame) is about to release a new book – based on his American-Italian snacking bar, Spuntino. There were a few recipes from this in The Sunday Times magazine. Sesame coated aubergine chips with fennel yoghurt tempted. Ditto the pizzete.

In the same supplement, Anna Jones tried to convince readers that tofu is great (I can never seem to find the firm, soy bean curd that her black bean paste and smoked tofu stir-fry requires). As an aside, The Sunday Times have announced that they’re starting a new food supplement from next week. Not sure yet whether there’s a particular USP. But obviously I’m delighted at the prospect of trawling through more recipes.

* Ella’s cannellini, black beans, sweet corn, paprika, maple and tomato mix is not, in fact, smoked over maple wood, rather it involves maple syrup (as ever) and smoked paprika. Should be pretty tasty, to be fair. Fans of posh baked bean can also have a go at Sophie Missing and Caroline Craig’s beans on toast – they’ve got the Cook Residency for the next few weeks.

On the berry front, Mark Hix began a bunch of blueberry recipes by saying he’s not sure whether they’re are a superfood anymore … but if you have lots, you may as well preserve them in alcohol to use later in a cocktail or on a pudding. This is the right attitude. His recipes included a cheesecake, roast pigeon and a zabaglione tart.

Thomasina Miers looked at raspberries. I’m not sure how I feel about them in a savoury salad, but was tempted by the classic ripple ice cream.

King Nigel’s Observer column was technically birds eye chilli themed. Yet for me it was all about what those chillies went in to – specifically, the kinda-Thai-mussels in a green coconut, lime and lemongrass noodle broth. That’d kick start Autumn nicely. I’d take down the sticky, spicy, chicken and grapefruit salad too.

Fuchsia Dunlop was in the FT again (are they phasing Rowley out?). Nothing particularly new in her quick fried squid recipe and intro – save, perhaps, a little Shaoxing wine in the marinade – but ‘owt wrong with that.

Henry Dimbleby and Jane Baxter put on an ‘inauthentic paella’ recipe for Cook readers in their easy but not crap feasting column. I couldn’t work out whether the roast fig, orange and mint thing that accompanied the paella was a side dish or a pudding, but I liked it regardless.

And in The Telegraph, Stephen Harris told us of his luck when, one day, the lobster catcher and cep picker arrived within minutes of each other, and the mix their two harvests turned out rather nicely. Good to get a reminder of how to kill and cook a lobster. Shame the stylists found girolles not ceps.

Bits, bobs, and other animals

Over at the guardian, Yotam was heralding the start of the school year with some very good ‘tomatoey’ pasta sauces. I can picture mums and dads all over the country right now thinking ‘finally I’ve got rid of the feckers’ and deciding to spend their new found spare time putting together a macaroni ‘pastitsio’ pie. You know, making a ragu, making a béchamel, cooking some pasta off, draining it, lining a cake tin, constructing the pie and baking that in time for the little angels bursting through the door … sure.

For Cook’s ‘four dishes from one thing’ feature, Ben Tish suggested a few things that could be made out of left over roast beef – a stew, some pasties, and a cumin and coriander spiked beef and beetroot salad.

Chris Kitch was The Sunday Telegraph’s ‘Stella‘ mag, with a few recipes for easy entertaining. I really liked the look of a cauliflower, buckwheat and harissa salad, and also his lemon, basil and yoghurt cake.

John Gregory Smith’s new book ‘Turkish Delight’ provided one of the Saturday Times‘ better recipe serialisations. From a pilav involving chicken livers, to a zingy chilli salad, olive encrusted pulled lamb, blackened cauliflower and more, the recipes tempted – any combination of them ought to sort a pretty good group meal.

And, to finish, the Weekend section of the same paper housed six chicken salad recipes by Catherine Phipps. I was pleased to see that Thai larb – which is really a Laotian dish, but an ace eat nonetheless – apparently constitutes a salad.

If Mark Hix got you in the mood for blueberries, and you’re not yet sated, how about this blueberry and lemon syrup ‘buckle’ from David Lebovitz?

I couldn’t resist Bill Granger’s corn on the cob with miso and paprika butter. Whilst I initially wondered whether miso, paprika, coriander and parmesan was a smart match – so many cuisines in one bite – it was, in fact, umami central.

Subscribe to the Rocket & Squash newsletter for fortnightly emails. These bring together the latest blog posts, plus a few other things from elsewhere that you might find interesting. The next one will head to your inbox on 8 September. Sign up using the envelope button at the base of the site. 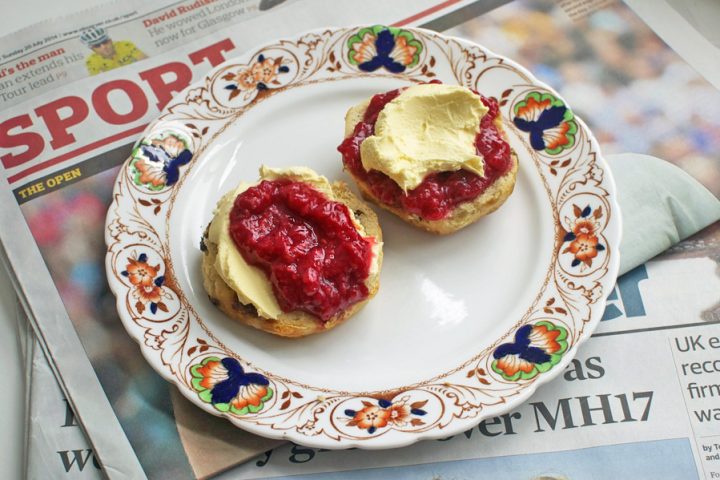 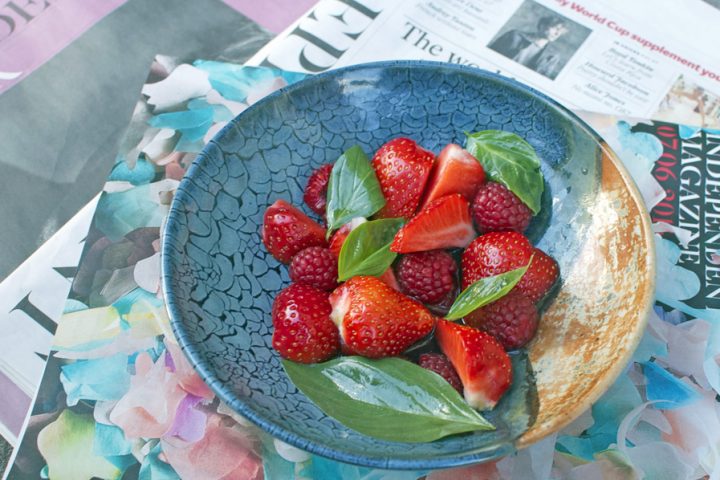