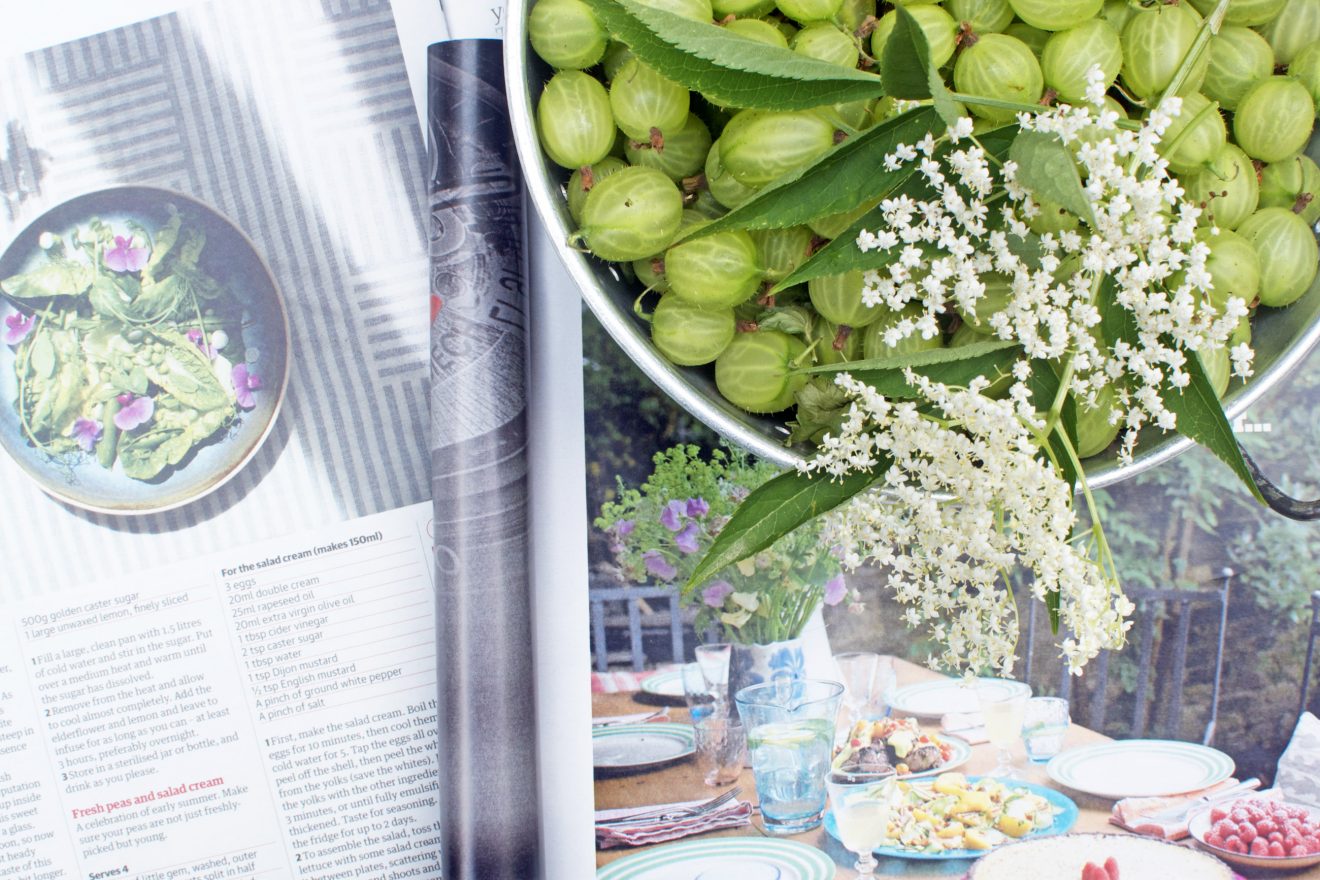 It was far too warm to spend time organising the weekend’s recipes into smart themes. So I went for the low sweat option. Which means you can, instead, compare and contrast the output of the different newspaper groups.

We got so much food content from King’s Place this weekend that it’s a wonder there was enough paper left for the news and sport.

Four no nonsense, summery mains from some much loved chefs, such as Fergus Henderson’s confit of rabbit leg in broth with aioli, Georgio Locatelli’s pasta with red mullet, peppers and olives, and Mitch Tonks’ roasted red seabream, artichokes and tomato.

Thomasina Miers also provided a rabbit recipe, this time BBQ’d with a lemon and garlic mayo. But I was more interested in the cocoa-rye pastry cardamom custard tart (brilliant).

And there were various things from the Ottolenghi test kitchen, each apparently suitable for eating outside. These include a stellar sounding fennel and rhubarb salad, heightened by tarragon and basil (and maple syrup and lemon in the dressing), and a rather good plum and rum ice cream. They’d be decent on a table under a roof too, I suspect.

In the Cook supplement:

Ruby Tandoh’s baking column was buttermilk themed. I really like the idea of blueberry buttermilk soda buns. One for impatient bakers.

Henry Dimbleby and Jane Baxter’s feasting column majored on classic (and wonderful) French food. Nothing not to love about a massive Pissaladiere, vegetable nicoise and stuffed veg .

Oh HELLO Rosie Reynolds’ cauliflower and mackerel nasi goreng (and three other great uses of a couple of caulis).

And HELLO Rosie Birkett too, who started her Residency series with a lovely write up of her (self titled) feral youth. Loved fresh peas and little gem salad with homemade salad cream.

On Sunday The OFM released 20 Italian recipes for summer. They release these online through the week, so keep your eyes peeled.

Best from Murdoch’s crew was Anna Jones veg focused column in The Sunday Times. I loved the sound of a gem lettuce, radish, carrot and cucumber salad, perked by tempered mustard seeds and curry leaves. Alongside a lemon-spiked dhal with a quick lemon and mustard seed pickle, you’ve a strong midweek supper.

The ST Magazine also had a set of easy dried pasta dishes from Jamie Oliver’s mate Gennaro. Broad been with mint ditalini the best of them.

The Saturday Times’ offering felt a bit soulless, to be honest. Recipes from a book featuring ‘master chefs’ were a mix of homely but meh Gordon Ramsay and Angela Hartnett offerings, and some dishes by Spanish uber chefs that you’ll probably never try at home. Maybe Andoni Aduriz’s leeks in sesame vinaigrette is worth a look (sherry vinaiger, sesame seeds, sesame oil)?

There were also 5 strawberry recipes from Paul Hollywood’s wife, ‘Chef Alex’. And four things that harissa goes well with … (as always, not really the only four things)

On Sunday, Bill Granger provided a few ideas for impromptu summer eating. I was slightly surprised these included making a spelt pizza dough with a 45 minute prove, but I suppose that process could still be quicker than a round trip to the nearest Tesco superstore.

Online, and so possibly from earlier in the week, was a write up of The Groundnut Cookbook guys I mentioned a few weeks ago. I like the look of their chicken stew – Scotch bonnet, peanut butter, chicken stock and tomato purée in there.

On Saturday Mark Hix managed to think up four different omelette recipes. I thought an omelette filled with Dublin Bay prawns and a saffron, fish stock , tarragon, stock sauce was wonderfully over the top; and Vietnamese crepe (eggs bulked with coconut milk), filled with crab, samphire and fragrant herbs (perilla and mint) with a nuoc cham dipping sauce would be a cracking summer lunch or light supper.

Diana Henry wrote a smart little introduction to the next big thing: food from the former Soviet Union. It hinged on Olia Hercules’ new book Mamushka, and three recipes from it. Look out, in particular, for the Georgian kidney bean salad and garlic poussin with plum chutney too.

Diana also had her own recipes in Sunday’s Stella Magazine. This week’s column was basil themed. It’s a good idea to make a basil oil for things like tomatoes and burrata salads, as it surely makes a few leaves last longer. A big thumbs up for the basil and lime sorbet.

And a big thumbs too up for The Telegraph’s new food columnist, Stephen Harris, who is chef at the acclaimed gastropub The Sportsman. The intro to his recipes was passionate and well written, and I suspect that not only is his lemon tart recipe rather good, but meringue ice cream with seawater spray shows he’ll probably add a few new ideas to the mix too.

From the sublime to the grim, Ella Woodward’s perfectly reasonable match of courgett[i] to mint sat next to a salad that just can’t work: roasted butternut squash, courgette, rocket, with a honey, apple cider, tahini and lemon dressing … and then goji and blueberries? So sweet. No thanks.

There were two sets of recipes in the FT.

First up was a good handful of baking recipes from the new Honey & Co. Baking Book; which is such an interesting and inspiring collection of treats. The FT housed Yemeni breakfast bread, salty sweet orange and tahni pretzels, chocolate, hazelnut and cinnamon krantz loaf, pear ginger and olive oil cake … but definitely consider grabbing the book.

The FT’s other recipes were by Bocca di Lupo chef patron Jacob Kenedy. His prawn and courgette panzanella really intrigued (soak the bread in a fishy stock, then roast it and serve the salad warm). I’m tempted by his sourdough ‘tiramisu’ too.

Take a look at this gin and pink grapefruit sorbet post by Helen Graves on her Food Stories blog.

And someone please start a petition for the removal from the public domain of Serious Eats’ baked bean BBQ Sundaes.

I made the most of being in The Shire and channeled the countryside thrift message of Rosie Birkett’s Cook piece. Finding wild cherries was a treat, but I made barely a dent in Mum’s fruit and veg patch, despite taking about 2kg each of gooseberries and red currants. Some of the gooseberries went into a crumble, along with the last spray of elderflowers.

If I get my act together, tomorrow will be a subscriber newsletter day. Emails are (more often than not) fortnightly, and they bring together the latest posts on this blog, plus a few other things from elsewhere that you might find interesting. Sign up using the envelope button at the base of the site. 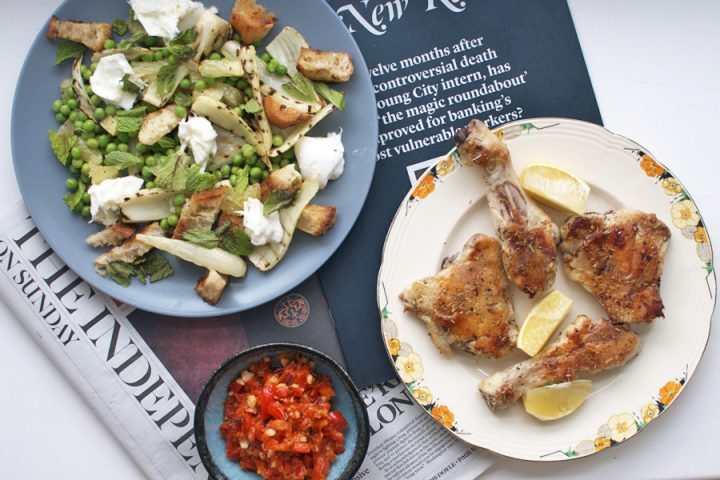 One thought on “Supplemental #69”