Easter weekend is coming up and our food writers have decided that this year, for once, lamb is off the menu …

… only kidding. Of course we’re nudged towards that meat. FWIW, I’m a fan, but hogget is a better option at this time of year if you can get it.

Rachel Khoo proposed a sort of Middle-Eastern-Persian-ish Easter menu in The Telegraph. Start with beetroot oatcakes and chicken liver parfait. Move on to cherry glazed lamb shank and a pilaf. Finish with pistachio and pomegranate cake. That’s a decent menu, I think.

A day later in The Sunday Telegraph’s Stella Magazine, Diana Henry also put forward a celebratory menu. She pointed to the perennially grey sky of her childhood Easters as a reason for her menu straddling winter and spring; come rain or shine, spinach stuffed leg of lamb with a lovely, simple, potato, watercress and crème fraiche salad will work nicely. Particularly if followed by profiteroles with lemon curd ice cream and chocolate sauce (no shame in following the sensible suggestion to buy the ice-cream for this).

Are you sold on either of those menus? A third comes via Bill Granger in the Independent on Sunday. He reckons suggests a boned and butterflied shoulder charred for just 12 minutes on the bbq with a 10 minute rest will yield cracking results. I dunno. Without a lengthy, tenderising marinade, I would’ve thought that leg’s a better option for that style of grilling, but obviously can’t knock it without trying. Incidentally, the shoulder is accompanied by an excellent, vibrant dressing, a smoked potato salad, and individual rhubarb and cardamom trifles (more a cheesecake in a glass than a trifle, but they’ll be tasty).

A number of writers hooked their columns to specific ingredients.

Ruby Tandoh’s baking column was banana based. I’d have tried the banana sesame fritters with  balsamic caramel if I could’ve been bothered to deep fry. More on a lemon, banana and thyme cake below.

Yotam Ottolenghi’s Guardian column was all about onions. Hard to look beyond his onion, chickpea and goat cheese salad. Two tablespoons of za’atar and a glug of cider vinegar aren’t named in the title of the recipe, but I bet they’re the reason that salad will sing.

Sod Easter lamb, I’m looking forward to getting a fix of the Vale of Evesham’s sparrow grass bounty next weekend. Helpfully (predictably) Mark Hix became the first British columnist in 2015 to theme a set of recipes on asparagus. Asparagus tempura tempts. I bet the asparagus with rapeseed oil poached halibut is good too (though, cough, check out his salmon rapeseed dish from a year ago), and check out the gnocchi.

The Times’ ‘Only Four’ was rhubarb based and there were ten recipes involving cream cheese in the Guardian’s Cook supplement.

Richard Turner of The Hawksmoor steak group and other meaty ventures has a book devoted to cooking pig coming out. I’m surprised the rather superb sounding pot roast pork shoulder, fennel, olives, oregano is done in just 60 minutes … but no doubt he’s thought it through. Slow roast leg of pork (9-12 hours at 120C ) with rhubarb ketchup will be the nuts. Mortadella and prosciutto pork meatballs too. Bottom line: Hog looks to be a good one.

Also guesting in this weekend’s supplements was Georgio Locatelli. He’s on a press drive at the moment because his Mayfair restaurant has just reopened following a kitchen fire last year. For me, Mr Locatelli is the real Italian deal, and it shows in his recipes. Breadcrumb baked anchovies, Messina style swordfish and a melon sorbet stood out – simple, classy.

To wrap things up

In the FT Weekend Magazine Rowley pontificated on life after restaurant cooking; and the fact that his home kitchen isn’t so well equipped. He begrudgingly acknowledges that a nutribullet is actually a pretty good blender. Though also notes that any old whizzer could make his chicken liver mousse.

Thomasina Miers’ recipes in Saturdays Guardian included a lip smacking coriander crusted roast chicken, which is to be served with a tahini laced, yoghurt based, green sauce. Masses of herbs in that: one bunch each of tarragon, parsley and basil (how big is a bunch?).

Nigel Slater’s Observer column featured a couple of puff pastry tarts, inexplicably labeled in the title and image text as ‘pies’ (no top = no pie, people). I suspect the smoked haddock and potato tart with a tarragon crumble sprinkled over the top will be extremely gratifying.

The Telegraph showed us how roast an egg.

Also, I like the look of Danny Kingston’s onglet, mushroom smoked oyster and Guinness pie / stew with a pastry lid on his Food Urchin blog.

The bananas in my fruit bowl were on the turn, so Ruby Tandoh’s lemon, banana and thyme cake was timely.

The cake dropped a cm or two as it cooled, though I suspect that’s because I took it out at the earlier part of the suggested time range; it could’ve taken five minutes more heat without being overdone and that might’ve sealed the air in. In any event, the eating of it was still light, fluffy and great tasting. Thyme and banana are a cracking combo. Certainly worth a try. 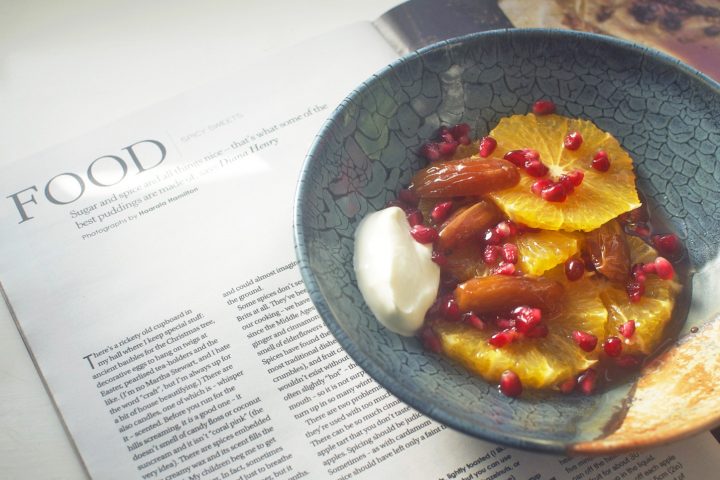 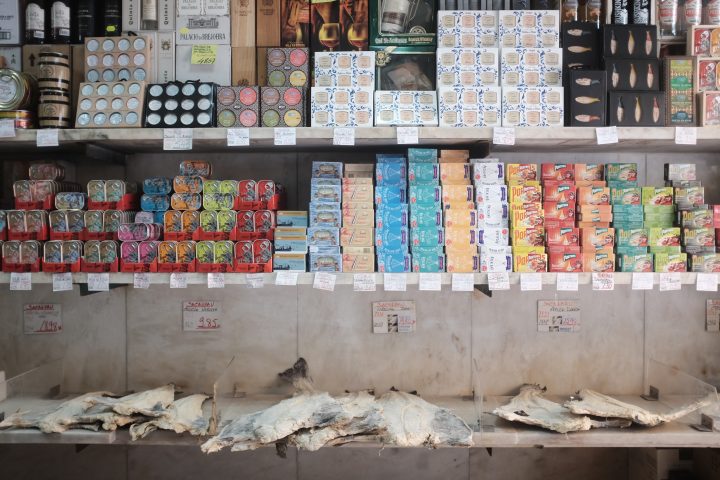 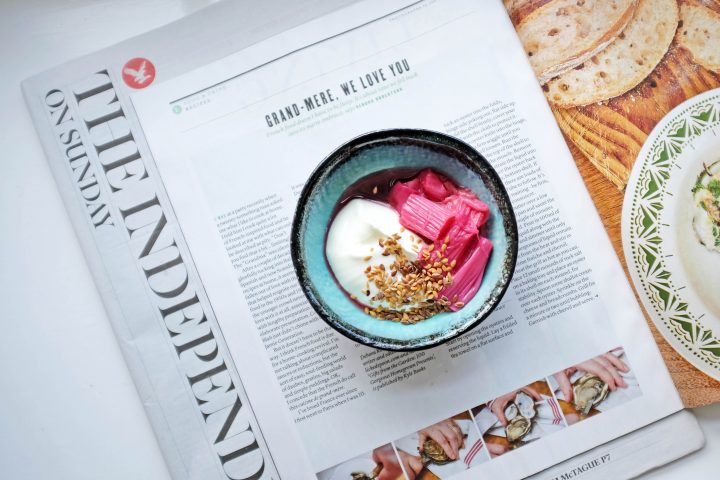