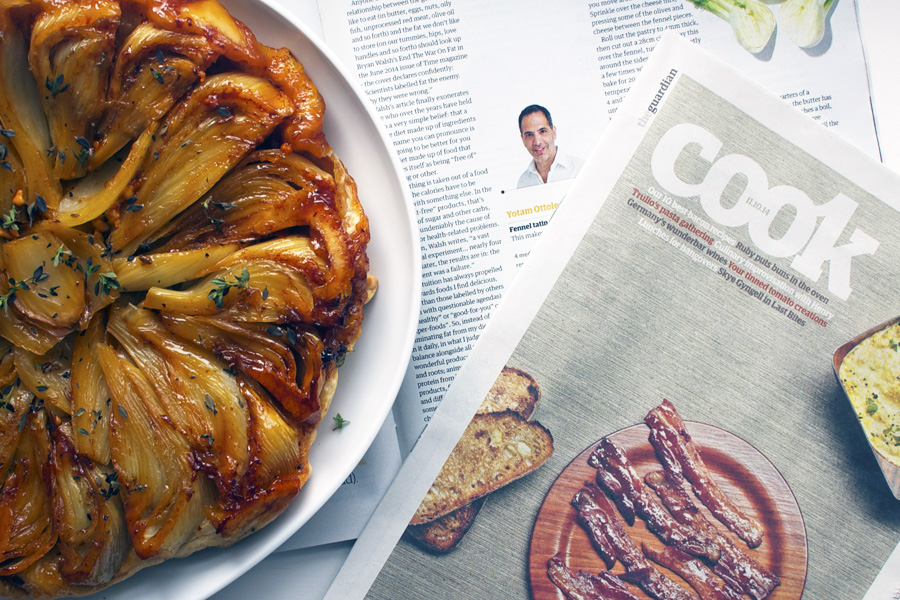 Because The Times’ ‘Only Four Recipes You’ll Ever Need’ was kinda good this week. I mean, technically it was just four spice lists with no real instruction or idea of proportion. But, still, you know. Baby steps.

So we got the key spice combinations for dhansak, rogan josh, korma and vindaloo along with some jazzy new food styling. That’s kind of interesting, yeah? Maybe even useful? Let’s see what happens next week before we get too excited. If it’s a permanent improvement, then it’s presumably down to the lobbying on these pages and I’m obviously happy to take all the credit.

Strong efforts all round

I’ve long enjoyed the influence of Asian cooking techniques on Nigel Slater’s recipes. He’s good at mixing eastern methods with British ingredients. In this Sunday’s Observer column, there was a neat, vaguely Korean, chard and carrot impatient pickle, as well as lightly pickled salmon with a cucumber salad. Top stuff.

Not to be outdone, Ottolenghi showed his pedigree with a vintage column. The theme, apparently, was “in praise of fat”. But really that meant three classic French dishes, with a sprinkling of Yotam magic. Fennel tarte Tatin studded with goat cheese and olives was the star. Harissa pommes Dauphine and cavolo nero croque look awesome too.

I wasn’t hugely inspired by the bulk of Mark Hix’s beetroot column in Saturday’s Independent. But he remains one of the first writers I turn to when scanning the papers, and I’m certain the ham hock, beetroot and horseradish broth will be very fine.

Diana Henry was (finally) back in the pages of The Sunday Telegraph’s. Squid was the theme and all the ways of cooking said cephalopod tempted: deep fried and served with anchovy mayo, stir fried with lemongrass and the like, or stewed with palm oil for a mocqueca a la me.

Lovely prose from Rowley Leigh this week, largely in praise of the cuisine of the Languedoc. The dish he ends up suggesting – a chickpea and spinach soup – appears humble and comforting. Perfect Sunday supper material as the nights close in.

All of Stevie Parle’s recipes in Saturday’s Telegraph hit the spot. He submitted three different – and actually fairly uncommon – sea food pasta ideas. I suppose crab ravioli’s done the rounds, but mussels fregola and slow cooked squid and pea tagliatelle aren’t things I’ve seen many if any times before. I’ve bookmarked both.

Bill Granger was on form too. He gave The Independent on Sunday five stonking baking recipes – all pretty easy, but all good. I’m not really sure which was my favourite. Which is a good sign. Blackberry meringue ‘pie’ in a digestive biscuit and coconut buttery shell; orange scented plum tarte Tatin*; fig and raspberry tray slice with a crunchy oat top; a spiced pear and blueberry filled shortcake; and an apple and ginger crumble pie. See what I mean? Good selection.

In The Sunday Times Gizzi presented her take on consciously healthy food. I suspect chicken satay with sweet potato and courgette noodles is very more-ish. Also Sardinian fish stew, served with cauliflower ‘rice’. I note and commend her skepticism of the genre.

The best bit of ‘Cook’ this week was Ruby Tandoh’s baking column. Sticky olive oil cinnamon buns are worth a go. Probably quite dependent on the right choice of oil. Some good pudding ideas from Henry Dimbleby too (plum upside down and an ‘emergency upside-down apple tart’. Which others would call a well-planned Tatin.) Wasn’t really feeling the supplement’s selection of bacon recipes.

* Incidentally, in both The Indy and Grauniad, all references to the Tatin sisters’ wonderful invention were in lower case. Tut, tut, subs.

The New York Times knocked out a first class Fall food supplement. There’s a great deal in it, much of it on the matter of getting youngsters eating. Browse if you’ve the time. If not, just go direct to this piece, which documents what happened when six seven year olds were treated to the $220 tasting menu at 3 Michelin star Brooklyn restaurant Daniel. Glorious.

I had a crack at Ottolenghi’s fennel Tatin. The outcome was really, really, hyper good.

Fennel that softens and caramelises whilst a puff pastry top/base cooks would be great on its own. But this recipe has a load of fennel seed coated goat cheese stuffed behind the vegetable too, which is kind of genius. There should’ve been oregano as well, but I didn’t have that and used lemon thyme instead, which was fine. I also omitted black olives from the party and slightly regretted it.

I felt it needed ten minutes longer in the oven than suggested. Fennel can take loads of colour.