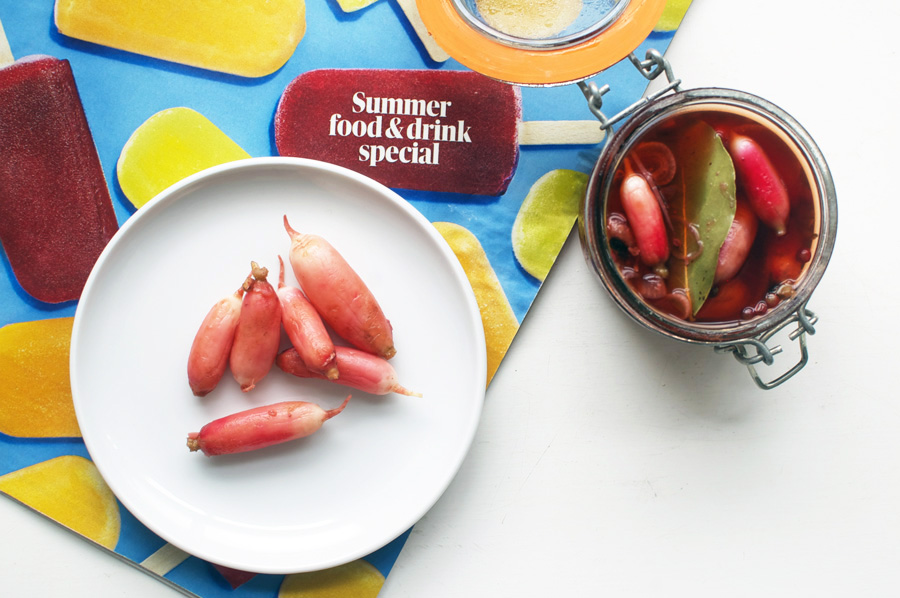 A strong set of tempting recipes this weekend. So I’ll get straight down to it.

It was ‘Summer Food Special’ time in the Guardian’s magazine. It’s good to see this paper taking food seriously for once – most weeks they barely even touch on the edible theme, you know, just a couple of regular weekend recipe columns, a whole separate food section every Saturday, a massive food section on the website that gets updated about every three hours. Oh.

Anyway. The big guns were on display for the occasion. Yotam’s A-Z summer veg was sprinkled with a fistful of good looking recipes, Angela Hartnett suggested a number of simple summer ideas (roasted toms and deep fried mozzarella), Nigella proposed four fancy ice creams, and loads of other senior names showed us their fridges (unsurprisingly, Fergus Henderson’s was the most chaotic and also the best).

But I actually think younger models provided the Grauniad’s best reading and most alluring recipes.

Jack Bevan from the Ethicurean restaurant near Bristol gave us loads of excellent cocktail and mocktail recipes. Back in a second once I’ve mixed me a rosemary whisky sour …

And Ruby Tandoh totally nailed her baking column in ‘Cook’; which involved a fine looking cherry and pistachio frangipane tart and a glorious hazelnut meringue stack, topped with roasted cherries and layered with coffee, syrup and chocolate ganache. Cin cin to that.

Round of applause all round

The regulars were on good form.

Bill Granger thought sufficiently outside the box with a set of marinades in the Independent on Sunday.

Mark Hix moved off the naughty step with a much better set of recipes than last weekend. This Saturday’s were all about mackerel. Piri piri smothered fish with a broad bean salad works for me.

Stevie Parle’s courgette recipes in Saturday’s Telegraph were very sound indeed. I’m pretty certain I used to hate courgettes and marrows as a kid. But I’m now very definitely a fan of each and every shape and colour. Stevie’s recipes are eclectic and enticing: Moroccan boiled courgette salad; courgette fries with lemon and feta sauce; marrow stuffed with lamb, pine nuts and tahini; slow cooked courgettes with grilled salmon and red chilli sauce.

There was pigeon from Nigel and a few retro picnic recipes courtesy of Gizzi (gingered coronation chicken was the pick of them).

Outside the usual faces, I thought the best food in Saturday’s Times came by way of Pierre Koffman’s ‘Eat! What the French cook in summer’ (salade Gasconne, salt baked bass, peach clafoutis).

I also enjoyed seeing Emma from Poires au Chocolat in print in The Telegraph with a few words of advice about food blogging (I’ll add mine: run often) and a couple of recipes, including an apricot and coconut loaf. Big up the internet food geek massive.

On which note, one of the best blog recipes I saw in the last week was The Little Loaf’s dark chocolate bounty bites.

A number of recipes caught my eye in Ottolenghi’s A-Z of summer vegetables, not least a salad of carrots roasted in maple syrup, caraway and cumin seeds, dotted with fresh peas and pea shoots. In the end I decided to try out his pickle radishes as I had a bunch of fiery breakfast chaps in the fridge.

The pickle intrigued because it included a good spoon of brown miso, all spice berries and pink peppercorns. Whilst the result was tasty enough, I think leaving overnight (as recommended) is too long, and personally would temper the all cider vinegar pickling liquor with a dash or two of water. Still. It was a decent idea and went well with some potted pig.

Marrow stuffed with lamb and pine nuts and a tahini sauce