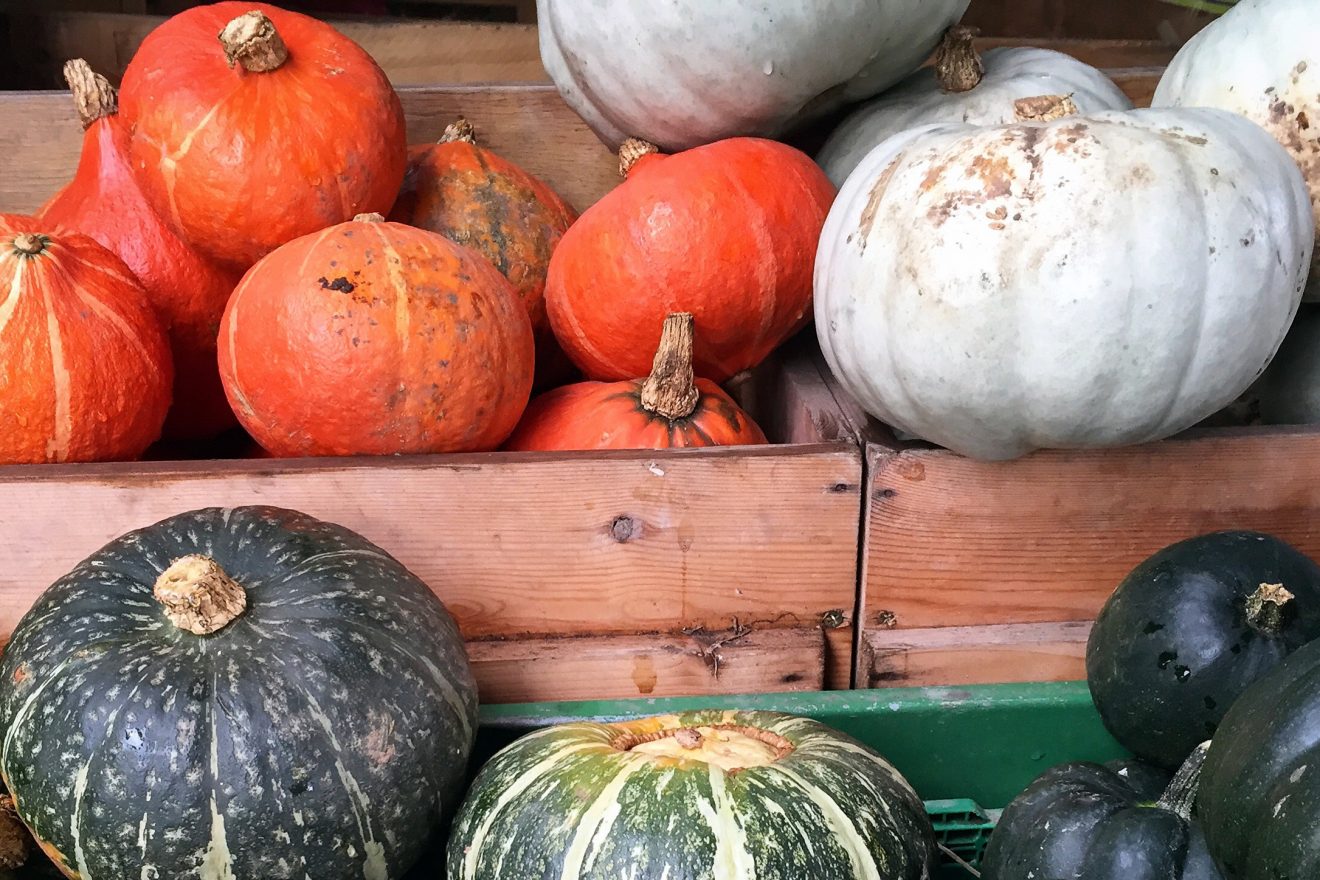 Hello hello. Still not convinced by doing the Supplemental round-up on a monthly basis. I might try every three weeks — hopefully that’ll keep it current enough and allow for themes to come through (without dominating my weekend). Watch this space.

In the meantime, here’s a selection of (imo) the best recipes and recipe columns published through September.

Joe Trivelli is a name you might know if a regular reader of Supplemental, as he occasionally stands (sits?) in for Nigel Slater in the Observer Magazine. He’s head chef at The River Cafe, so … is good, and is also all about great produce, paired smartly, treated well and Italianishly. He’s a book out now, called The Modern Italian Cook and if the recipes from this month’s Observer Food Monthly are anything to go by, it tastes lush. Padron peppers and wild mushrooms (served cold) look ace. Also vinegar and herb splashed shaved courgettes. And pork chops with quince and vinegar. Lovely stuff.

I’m very much looking forward to seeing Gizzi Erskine’s new book Slow. Some of her recipes were extracted in this Saturday’s Times Magazine. Consider chicken braised with shallots, orange wine and brandy; a mushroom, mushroom and mushroom ragu (fnnnar); and a frankly outrageous, genius looking and sounding lemon surprise tart.

Oh, hey, The Borough Market Cookbook is out this month (Disclaimer: I wrote [most of] it). This one’s all about cooking with seasonal market produce to inspire your home cooking— wherever you are — and of course is also rooted in the place and the people that make it so vibrant. Yesterday’s Sunday Times Magazine extracted a handful of recipes from the Autumn and Fishmonger sections of the book. Be sure to catch the last of the plums to make the roast plum, tarragon and almond pavlova; ditto corn on the cob for the creamed corn with lime and chilli squid. There’s more time for the winter squash red curry and spiced mackerel with quick pickled carrots.

To my mind, every season is pie season, BUT Autumn is particularly legit for chomping down on butter-rich pastry. Some of the ideas in this weekend’s Saturday Times Weekend section feel particularly appropriate right now: things like gruyere and ham; chicken and chorizo paprika crumble; and courgette galette via the Higgidy pie company/book.

Oh, and from The Sunday Times a few weeks ago: Reese Witherspoon has a cookbook. Wut? (I loved the reader comment underneath her introduction: “This was more boring than I expected.”)

I wonder if this is the most effective way to round up the weekly contributors on a monthly basis?

As always, mega stuff from Anna Jones in the Guardian’s Feast supplement: with fig and halva sundae and honey, almond and cardamom drizzle cake both equally wonderboom Middle-Easternish sweet things. And cauliflower ceviche tacos and squash and caramelised onion quesadillas are evidence of a veg-focused genius at work. Love the romanesco orecchiette too.

You know by now to read everything Rachel Roddy writes. Through September, we got: “Herbs in cooking are like accents in words: they can change a dish completely” alongside stuffed courgettes; a jam tart “with a thick blanket of egg-enriched marzipan, which, when baked, takes on a light golden crust, but – because of almond’s natural oils – remains soft and slightly gooey underneath”; a reminder of the persistent and vital scents, languages, music and life brought by immigration as context to potato cakes with salsa; and a September minestrone (which isn’t up yet).

Amazingly, given the number she’s produced already, Diana Henry hasn’t run out of chicken recipes just yet. Thank goodness, because things like Persian-spiced spatchcock chicken with quick-pickled red onions and dill yogurt, and Burmese chicken salad look mega (in the The Sunday Telegraph Stella Magazine). She’s also still got plans for salmon fillets — I liked the ones served with green beans, and a cornichon and mustard crumb, and the other ones served in a puddle of spiced coconut cream.

I know I said Autumn is pie season. Well, it’s also Nigel Slater season. Your honour, I present exhibit A: slow roast duck with figs, thyme and celery, and fondant pumpkin with mustard sauce, pot roast knuckle of pork with grapes, noodle soup with lentils and sour cream, plus blackberry and apple marzipan crumble (all in September’s OFM). Exhibit B is baked ricotta with thyme and parmesan, but let’s be honest the case is closed. Separately (as I have more than one stomach), I’m also coveting his midweek suggestion of clams with oyster sauce and pak choi, and sardines with tomatoes and orange (if you can still find the first two things).

Back to Feast, where Meera Sodha’s still suggesting food that’ll be loved by vegans and omnivores alike. Things like Slow cooked leeks, saffron and chickpeas and an autumnal take on a fattoush: crisp pitta, roast squash, pomegranate molasses, tahini and other tasty stuff.

Yotam Ottolenghi … where do we start. Well, I would 100% devour all of his latest menu for Feast — Italian-themed, he takes us through clams with tomatoes, chilli and lemon; pork and fennel meatballs; and a grape, strawberry (and fennel seed, rosemary, vanilla bean paste) crostata. Basically: Flavourtown. Take a look. Lift your tongue back off the laptop. Then devour his Middle Eastern menu (the beef skewers with dried lime and and sumac onions. And then the Mexican one (the slow-cooked hake in cascabel oil with corn tortillas and the radish and cucumber salad with chipotle peanuts).

The Telegraph’s Stephen Harris serves his eggy bread with warmed raspberries and strawberries (and uses the more historic ‘Poor knights of Windsor’ name), and makes his ice cream with blackcurrants instead of vanilla (then sandwiches it, with additional jam, between oaty, brown-sugary biscuits).

Have you seen Penguin are releasing Perfect Perfect 100 Per Cent Completely Totally Indisputably Perfect, by Felicity Cloake of G2/Feast’s Perfect fame? This will be the manual that every hungry Christmas stocking deserves. (In the meantime I think you should check her dissection of French apple tart, carnitas, and German plum cake.)

This, by Rowley Leigh in the most recent  FT Weekend Magazine, is an interesting paragraph:

“The even greater threat to game is simply that not enough people want to eat it or know how to cook it. Even as pluralism thrives and we can get the ingredients for a laksa or kimchi, the actual variety of what we eat is getting smaller. We have chicken, occasionally duck, the three farm animals — beef, pork and lamb — and a fish counter increasingly dominated by tasteless farmed salmon, bream and sea bass. No wonder we use lemongrass and lime leaves to make the diet a bit more interesting and to mask the deficiencies of 99 per cent of the chicken that we eat.”

He followed that thought with three autumnal crackers: wild duck salad with pickled quince, radicchio and chilli; partridge with aubergine purée, pistachio crumb, chickpeas and spinach; and a game pudding. Are they from his book, “A Long and Messy Business”?

For the same uncoated-glossy (or matt-gloss?) pages, this month The Honeys rocked a fig and fennel salad (“only two main ingredients, but an explosion of texture and fast”), and then a rather fruity looking roast chicken involving fig leaves, figs, tomatoes, lemon and marjoram. So good that we can get back to Sunday Roasts now the temperature’s dropped. Also note their pomegranate and plum swirl cake.

And from Tommi Miers’ recipes in Feast, I was drawn to linguine with grilled, breadcrumbed mussels and sticky courgette, pistachio and lemon syrup cake.

Other guest cooks and seasonal bits

Are you London based and do you know The Marksman? You should — the food there is A1, as indeed The Telegraph noted a few weeks ago. You might find it tricky to find the ingredients for chef-owners Jon Rotherham and Tom Harris’ iced sorrel, jostaberries and tayberries. But give the chard and spenwood pie a go; interesting creme fraiche laden rough puff recipe.

Remember how The Sunday Times announced the signing of Tom Kerridge at the beginning of the month? Well, that left a cheffy gap at The Sunday Telegraph, now duly filled by Angela Hartnett. They published one of those meet the chef interviews in mid-September, plus a late summer dinner party menu (rabbit pappardelle, fish with coco de paimpol, lemon tart). I reckon things’ll ramp up in earnest in her next column.

Just to add to the roast chicken recipes, Dan Doherty does an excellent one. Peruse his recipe on The Telegraph’s web pages for a chook  cooked over a bacon and mushroom ragout.

Vegans in the fam? Send them to Meera Sodha, obviously. But also to Fuchsia Dunlop in the FT Weekend Magazine, where she pointed out that Chinese cuisine is often a natural match (less meat and oil not butter). Stir fried spinach with chilli and fermented tofu; sour-and-hot silken tofu with avocado; and especially tempting dry-fried ‘eels’ (shiitake mushrooms).

From The New York Times, I liked Alison Roman’s idea of a kale or chard emboldened salsa verde — which, along with the garlic, softens, wilts and mellows under the weight of a resting steak. Also Tejal Rao’s tomato salad on cumin spiced yoghurt

Pork chops with quince and vinegar