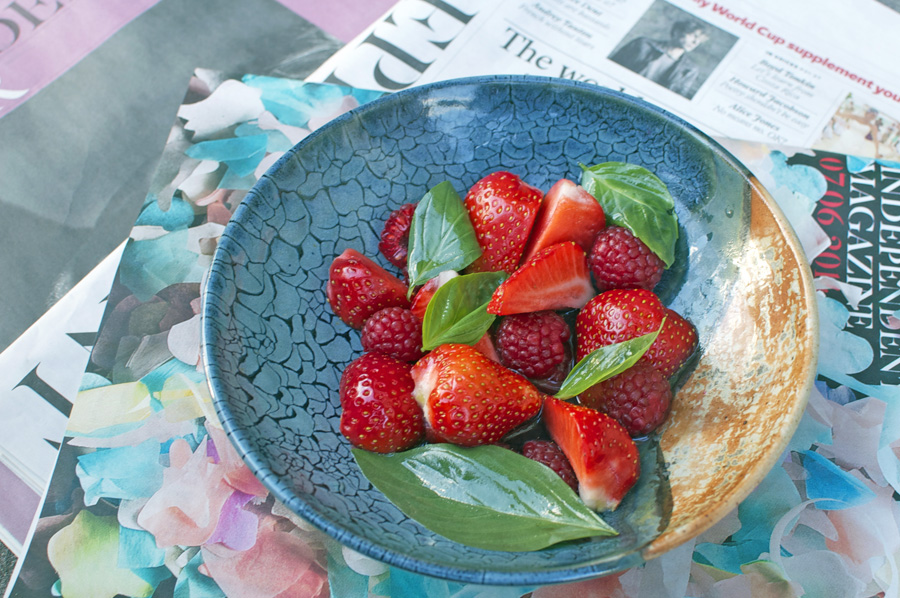 Because I’m a food snob, I’ll tell you in September/October that my favourite time of the year for British produce is Autumn. It’s difficult to back that up now, though, whilst we sit through the last throws of the asparagus season, and the first flush of berries (red, black and goose coloured).

Mary-Ellen McTague was back in charge of the column formerly known as Hugh’s (#hashtaglestweforget). She devoted her eight hundred words or so to strawberries. Her four fairly classic recipes, which included Eton mess, pavlova, frozen parfait, were preceded by a SHOCKING mantra: always macerate. I think I agree. Do I agree? I kind of agree. Oh I’m not sure.

Regardless, I craved strawberries with black pepper slush whilst reading the rest of Saturday’s pages. And I award bonus marks for making “looks like a posh Viennetta” the selling point for the parfait.

Apparently Rose Carrarini has a restaurant in Paris. She definitely had a cheeky Strawberry shortcake recipe in the FT. This is cross between a biscuit and a scone. Lots of cream and fruit. Tempting.

Unsurprisingly, Mark Hix (aka Mr Seasonal) was also on the berries. All four recipes looked superb. Not least: a gluten and dairy free rapeseed oil cake with raspberries; strawberries, goat curd and white port; and an ‘Asian fruit salad’ – more on that below.

It is absolute nonsense to think that more than 1% of World Cup football parties will be accompanied by anything other than shit lager, Doritos, Pringles, jars of Dorito salsa and Dr Oetker pizzas. But I suppose we shouldn’t give the food pages too hard a time for using the tournament as a theme.

The Guardian’s ‘Cook’ supplement gave us the ‘Ten Best Brazilian‘ recipes. Pao de queijo and feijoada are indeed ubiquitous dishes. I note that there’s no palm oil in McEvedy’s Bahian moqueca de peixe. Which seems to miss the point a bit. But coconut manjar with prunes is tempting.

… actually, though I wish he’d recommended cachaça based caipirinas rather than vodka cocktails, the raw sea bass with coconut milk and crisp sweet potatoes looked divine, and kale crisps and crushed cashews will make good snacking. Still, if either of these are prepared for a genuine, football watching, World Cup party on Friday, I’ll eat my Havaianas.

Ottolenghi prepped us for his new ‘thinking outside the box’ veg book. Also in the Guardian’s pages, Ruby Tandoh’s baking with tinned fruit is worth a glimpse – not least for toffee and tinned prune buns. Sticky.

In the FT, Rowley Leigh’s spinach sformato with chicken livers appears a quite extraordinary thing. And Gizzi Erskine’s Sunday Times column was on the matter of umami. I do love a good pissaladiere. I also loved Brad McDonald’s grits at the Lockhart, so it was nice to see him lend the recipe.

The Saturday Times hit its usual low standard: there’s little to see in ‘Middle Eastern Food made easy’ and the four chocolate tarts that I, apparently, will ever need, featured …

… precisely none of my favourite additions to chocolate tart. Which, for the record, are a dulce de leche base layer; a handful of sea salt; or a slug of espresso.

I smiled when I saw that Diana Henry plans the menu first, then invites the friends to suit. Though I have a feeling her suggested summer menu would suit most people.

On the internet and around the world

Back to Helen Graves’ Food Stories for the best of the blogs this week. Her recipe for Turkish liver and a spicy onion salad looks super.

I spent a moment or two browsing the Irish Times’ food section. A roast pork recipe by Domini Kemp that caught my eye. The flavours involved in a marinade/stuffing sound lovely – lemongrass, coriander seeds, ginger, coriander, honey – but my eyebrows practically hit the ceiling when I saw the cooking time suggested is 2.5 hours at 170C. For pork loin? No thanks.

I went for Mark Hix’s fruit salad – strawberries and raspberries were doused in a sugar syrup infused with ginger, lemongrass, star anise and lime leaves. It was delicious. Thai basil garnish is probably the star addition and on each iteration I’ve been adding bigger and bigger handfuls. 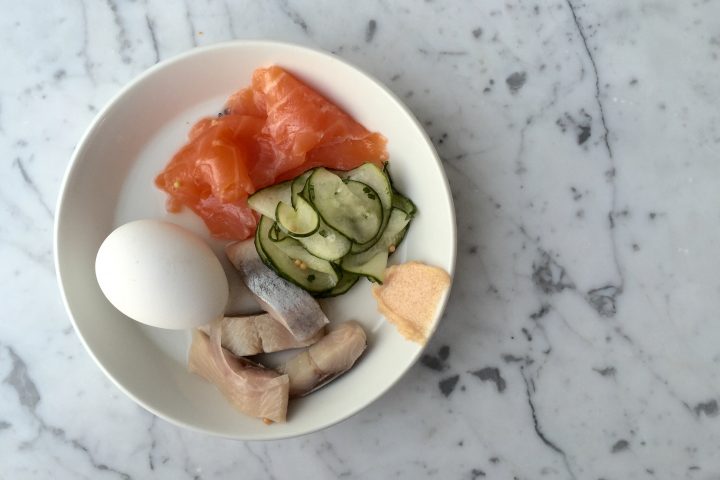