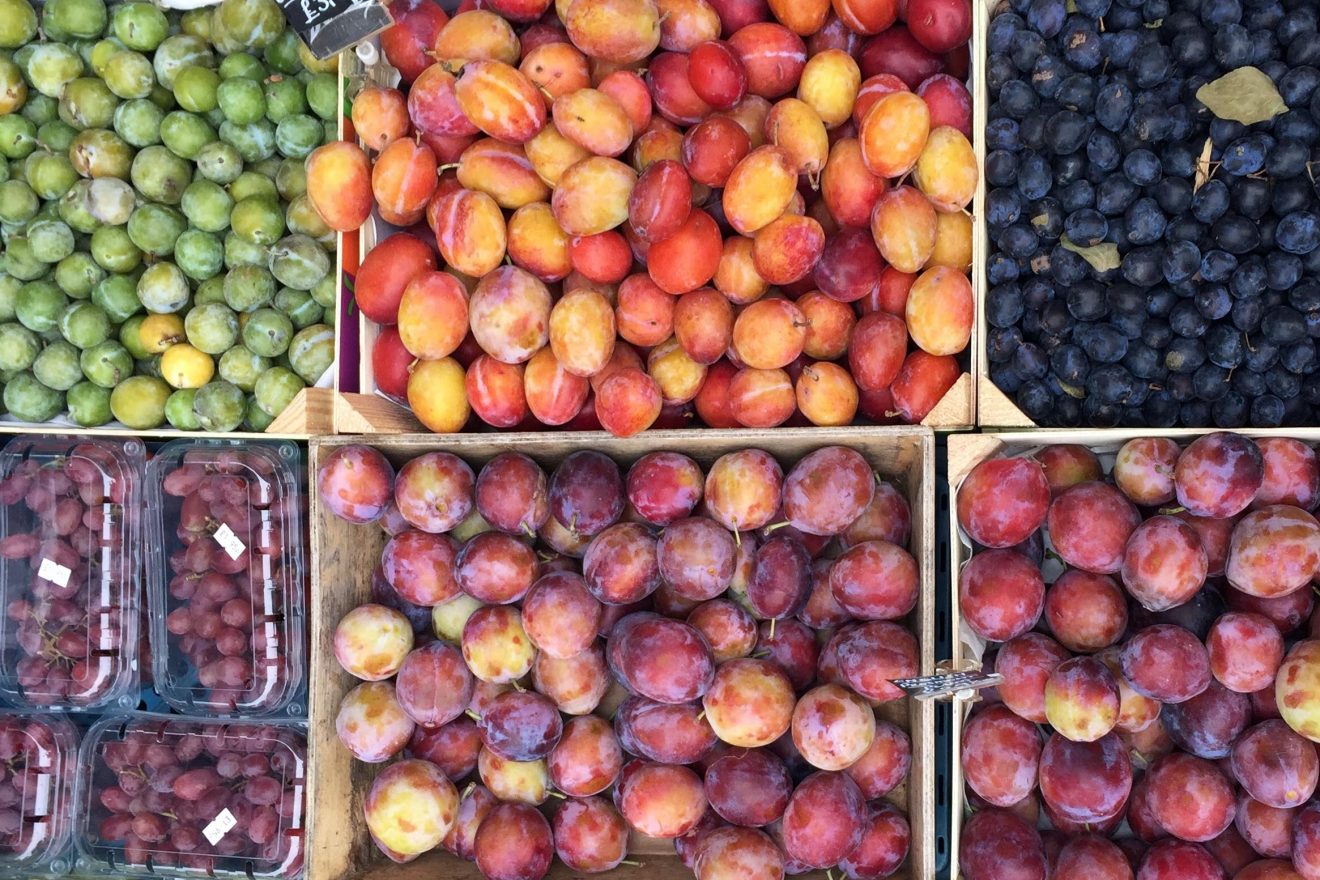 Right, make yourself a pot of tea and settle in to a comfy chair. Here are a fistful of noteworthy recipes from August’s weekend supplements.

*(plus a few from the first two days of September, because I should have done this last week and this recent selection won’t feel quite so relevant in a month’s time..).

As always, plenty of book extracts in the mix. Here are some that caught my eye.

Sybil Kapoor’s new book Sight Smell Touch Taste Sound takes the Salt Fat Acid Heat approach to cookbooks — i.e. it’s about teaching the reader how and why we cook, rather than simply showing us recipes. You get the feeling her message (educate your senses?) could never be completely passed on in a single newspaper extract, though there’s enough context in The Telegraph’s introduction to the book to ensure her slightly salted (and so flavoursome) salmon with tarragon butter, and full fat boozy (so soft and creamy) strawberry ice cream appeal.

And another featured by The Telegraph in August was good looking, Mexican-inspired food from stylist Esther Clarke. I really liked her crispy squid taco idea and also hibiscus ripple lollies.

(By the way, there were other unconventional tacos in The Telegraph’s pages this month via Stephen Harris: Hot smoked salmon and herbed cream, of all things! Might just work …)

Looking forward to seeing Gill Meller’s Time: a year and a day in the kitchen. Recipes in August’s OFM suggest plenty of mellow, comfort food. Like wild mushroom tart and baked apples with vanilla, butter, lemon and brown sugar.

Finally, I’m less sure what Simple means to Ottolenghi now I’ve read the Guardian Weekend Magazine intro to his new book than I was before doing so. Is it that cooking simply means different things to different people and this book covers all those interpretations? Ultimately, I’m not sure that matters because (obviously) all the dishes extracted by the Graun look super and no doubt the rest of the book will taste great too. Whether you find them simple or not. In terms of the extracted recipes, head to Bridget Jones’ pan-fried salmon with pine nut salsa and the Iranian herb fritters.

Holy shit. Look at then make Meera Sodha’s aubergine pollichattu – Keralan style aubergine layered with a coconut, tamarind and ginger sauce. From the latest edition of the Guardian’s Feast. I also loved the look of her Burmese peanut, mango and lime salad last week. Zingy.

Rachel Roddy’s columns in the same supplement continue to be an essential read. A couple of weeks ago she wrote (convincingly) in defence of aubergines. Essentially, “I see your apathy towards nightshades and raise you a cheese, anchovy, onion, breadcrumb and oregano topped aubergine slice“. Catch her caraway madeira cake too. I loved the suggestion in that recipe, that a cake is done when a strand of spaghetti can be poked in and out clean.

The Saturday Times Magazine’s Donna Hay recipe collections always cause me to take a second look — despite the shouty ‘QUICK’ ‘EASY’ ‘SIMPLE’ headers, they’re often pretty flavoursome and very doable ideas. The best recent set, imo, being a bunch over the second bank holiday weekend filed under ‘quick chef’s tips’. Turn to this for things like porcini stock risotto with brie and crispy sage, a mustard and lemon butter roast chicken (under the skin), lightly spiced chicken thighs and dates braised in a chopped tomato liquor, and char siu roast duck legs.

Of Thomasina Miers’ recent recipes for Feast, I was particularly drawn to her Jerk lamb burger with grilled sweetcorn salad — to mark Notting Hill Carnival. The spicing and scotch bonnet look appropriate. No jerk rice in sight.

I got given a jar of pistachio butter a while back … and it’s been an expensive but redundant space occupier since that moment. I’ve no idea what people normally use it for, but Skye McAlpine’s pistachio butter loaf with lemon icing (in The Sunday Times Magazine mid August) looks good.

Perhaps the main downside of moving #Supplemental from weekly to monthly is that some of the seasonally themed recipes don’t feel quite so suitable four or five weeks later. Though this is probably particularly acute now as we flick from a heatwave of a summer into autumn. Still, these recipes all look dang tasty if you can get hold of the ingredients:

Berries and currants are probably hardest to find. If you can still get hold of redcurrant, blackcurrants and raspberries (perhaps you were clever and froze a few punnets), then make Nigel Slater’s hot summer pudding at the bottom of this Observer piece from early August. Needs sloe gin too.

And if you can find white currants (I’ve seen them within the last week or so), have a crack at Diana Henry’s white currant and elderflower cream tart. There’s a white peach sorbet recipe in there too, and they’re peaking right now imo.

On which note, The Honey’s feta and peach pizza (few fennel seeds, bit of fresh mint) should have caused a few FT Weekend readers to pause and salivate. Also their cold beetroot and yoghurt soup, though that was mid-heatwave and we’re done with that sort of thing for a year, no?

Oi oi fellow plum fans: Ottolenghi’s plummy recipes in Feast last week were a delight: all-spice pickled plums to go with pork, duck or fried tofu; chipotle chicken with plum and tarragon salad right up my strasse. Nigel must have had a word, though, as on the same weekend he’d shotgunned the sweeter side of things: with little plum frangipane pies, and a rather wonderful sounding dessert of plums and grapes cooked in marsala and plum jam, to be served with blue cheese and toast.

Of Yotam’s corny suggestions this weekend, I like the idea of spiced semolina with fried corn, peanuts and coriander. That said, if asked to choose at gunpoint, I’d probably err towards Anna Jones’ column a week earlier in the same magazine, which suggested the so-good-right-now cobs be used in a blackened corn salad with pickled chilli and herbs, and a cauliflower, coconut and coconut chowder topped with peanuts, chilli and basil (surely the Thai version if you can find it?).

Some news and other topical eats

The Sunday Times Magazine have just announced that Tom Kerridge is their new twice monthly recipe columnist. From his occasional columns for The Telegraph I think on the whole it’s good to get a regular portion of Kerridge (see the game recipes linked below), though it’s definitely best when the recipes are elevated home cooking, rather than the tenuously scaled down restaurant dishes in his first ST outing. (i.e., next time you hopefully won’t need to find yourself half a kilo of crab, prawn or lobster shells and 1 litre of coconut milk (?!) to make a bisque; and your potential Sunday roast won’t involve cooking up an ox cheek and bone marrow bordelaise to spoon over your 2.5kg rib of beef, nor will it suggest reducing and puréeing a kilo of gherkins and their pickling liquor to get 8 spoonfuls of garnish.

I’m always surprised to see so many breakfast and brunch recipes — come on, we’re a Kellogg’s, toast and maybe an occasional soft boiled egg nation. Fortunately, Diana Henry’s recent breakfasts in the Sunday Telegraph Stella Magazine struck the right balance between interesting and realistic. Devilled eggs on toast a neat twist, ditto raw salmon with melon, cucumber and ginger (GREAT idea this one), and shaken berries with a rye granola. Thumbs up for these.

Grouse arrived half a month ago — and The Telegraph marked the start of a new game season with a bunch of feathered recipes from their archives. Stevie Parle’s ‘slow-cooked’ grouse with chorizo is intriguing. And I’d happily take on this Game terrine with blackberry and ale chutney.

“With Rosh Hashana around the corner, we offer this dish to all denominations: it’s a great centrepiece that is not too hard to make. It is everything you want the next 12 months to be: sweet and savoury, a little bit tangy, meaty, fruity, spiced, slightly nutty and never ever boring”. The Honey & Co duo again, there, talking about stuffing apples with minced beef.

IMO everything Alison Roman does, as her book says, is just so cookable. Her offerings for NYT readers this month included clams in white wine (nothing new here … except they’re with celery and toasted garlic. little twists, nice), and sweet and salty pork shoulder steaks with a citrus herb salad.

Tejal Rao offers something a bit different with her coconut rice pancakes (surjoli).

And of course anything by Samin Nosrat is worth a read, most recently with a Cajun shrimp boil. More accessible than the crayfish boils we sometimes see, and with enough cayenne “to make your nose run”.