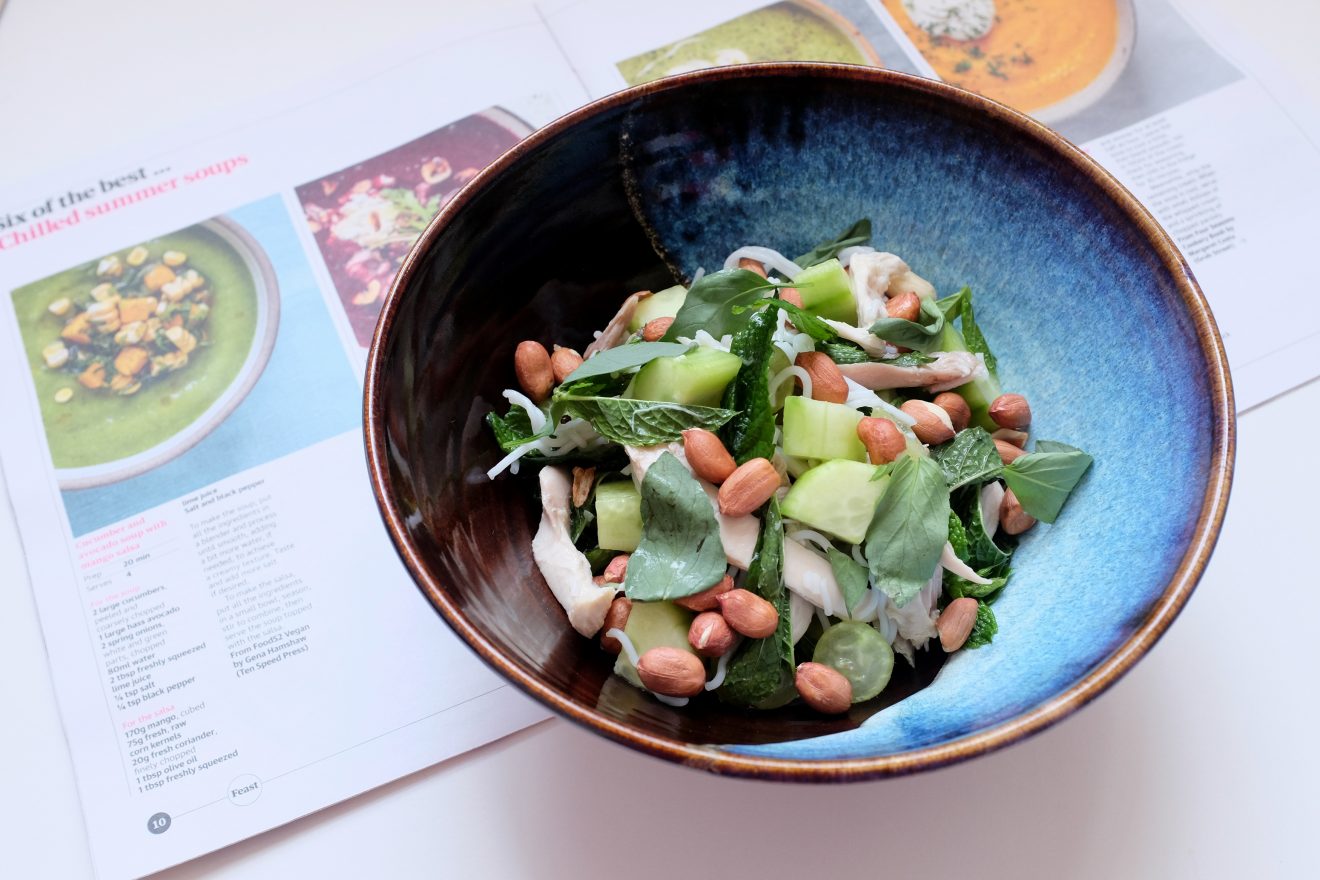 From now on there’ll be a slight tweak to the timing of #Supplemental, as it’s morphing from a (mostly) weekly digest into one that covers a month’s worth of recipes. I’m afraid I just can’t find the time to keep doing it every seven days, and hope the change means Supplemental will live on, and allows me to divert blog energy to other parts of Rocket & Squash, like restaurants, original recipes and cookbook reviews.

Given the amount of material each month (and all of our attention spans), there’ll be more curation on my part, and so it’ll largely cover what appear to be the best or most notable recipes. (Fear not, there’ll be a sprinkling of raised eyebrows and yawns too for good measure.) Consider This edition is a round-up for the latter half of June. The next, in 5 weeks time, will cover all of July, then all of August etc etc.

Anyway, on to the latest set of recipes…

The chances of you spending hours over a hot stove at the moment are pretty low, but the papers seem to have seen that coming, and there’s been a clutch of warm weather recipes that could reinvigorate your mealtimes, once you’re sick to the back teeth of Greek salads, tomato salads and watermelon.

Donna Hay’s summer food for The Times Magazine on 23 June were rather tempting imo. From clams in XO sauce with egg noodles, to steaks with piccalilli butter, chargrilled poussins with honey rum butter and caramelised pineapple, and tandori lamb chops with a pea and orange salad — it all hits the charred, spiced, sweet and savoury notes that appeal when the going gets hot.

Gazpacho usually gets the call during a heat wave, but there’s a lot to be said for a chilled almond soup — like Skye Mcalpine’s in The Sunday Times Magazine on 24 June. Interesting that she’s taken the Italian balsamic instead of classic sherry vinegar route. To my tastebuds the ‘optional’ addition of sliced figs/grapes/apple are, actually, essential.

The Guardian Feast managed to conjure up six other cold soups, not once settling a classic gazpacho (though they do come close), which is fairly impressive. Chilled beetroot with mustard and grapes, cucumber and avocado with mango salsa, melon soup with feta, mint and cashew nuts stood out. I mean, they’re a little bit like smoothies/raw juices rather than soups, but still.

“Hand me a lukewarm cocktail on a summer’s day and I’ll probably throw it at you” must be the least Nigel Slater thing Nigel Slater has ever written. Anyway, context: the man wants ice in his summer drinks, which include a watermelon fizz (the fruit, elderflower cordial, prosecco), and a gooseberry, elderflower and mint option too. Alongside these suggestions in Sunday’s Observer Magazine, were tips on embellishing olives (roast peppers and onions), and an A1 drinks nibble (anchovy, olive and pine kernel puff rolls).

Bit worried about the texture of Yotam’s no churn strawberry-watermelon sorbet-granita-thing from the latest edition of Feast. I guess the vodka and glucose content will prevent it from being an ice block. But I do like the idea of lifting the fruits with lime and lime leaves. See also a strawberry and rhubarb custard slice, and a strawberry and tomato salad.

I’m keen on all of Tom Kerridge’s summer tarts for The Telegraph. From ones with relatively little effort (olive, anchovy and tomato puff tart), to peach and almond tartlets and summer berry creme pat tart, with all elements made from scratch. The courgette, black olive and feta quiche might be the one, though.

I’m taken with Meera Sodha’s black pepper istoo (stew) of new potatoes and green beans, not least because of the tamarind shallots served alongside.

On seeing that her Feast column was baby spud focussed, I was going to slyly mention that about this time last year Anna Jones devoted a few pages of Cook to new potatoes. But then saw that she did referenced in her intro anyway, so really this is just a note to say that the veg goddess know her way round a tuber, and you should take heed of things like new potato and onion flatbreads, and a salad of new potatoes, green beans, olives and all the good potato salad things (eggs, capers, dill etc).

The last two weeks have seen the first two “waste not” columns by eco chef Tom Hunt. He’s done potato peeling crisps and roast cauliflower greens. Rather than provide a recipe for roast leaves, I would personally have liked the reference to floret and leaf kimchi to have been expanded on. Good intentions, here, though it’ll be a challenge for Tom to balance well-known solutions for surplus (which are approachable for those not already on to them), with enthusing keener cooks to continue to be more frugal via more inventive ideas.

I liked how, when Stephen Harris wrote of the National Restaurant Awards in his Saturday Telegraph column, he reiterated his belief in restaurants just cooking good food, rather than following what they perceive to be the trend (particularly if their perception comes from Masterchef). I also like how he followed that sage advice with a recipe for baked salmon and thousand island dressing. On paper, so unfashionable; but on the plate, almost certainly delicious.

Big round of applause and wise nodding for this, Rachel Roddy: “Pinpoint accuracy disappears with cooking like this, which is how it should be: your eyes, hands and stomach deciding how much of everything you are going to put in, your head a cooking satnav, recalculating according to how the process is going, how it all tastes, adding tiny pinches of salt as you go along, a pinch of sugar to balance bitterness, a dash of vinegar to sharpen the edges, fresh herbs if you wish.” Comes in the context of Ciambotta Calabrese, an Italian stew that appears much like ratatouille, save it’s got spuds in.

Last week Yotam suggested three great things with courgettes: ribboned into a salad with thyme and walnuts; sliced, sweated, softened and mixed with tarragon, pine nuts and basil, then lobbed on top of a semolina ‘porridge’; and grated to eventually end up in a herby, cheesey, filo pie. It’s interesting (I think) to see the how the options for courgettes open up when you vary how you cut them.

Scroll around the FT Weekend website and you’ll find last week’s Honey & Co recipe for a chicken and herb kofte wrap. I bet it’s lovely. But I’m more interested, right now, in their crab and watermelon salad with a charred chilli and tomato pickle sort of thing. Did I mention their new book — At Home? It’s out this week and it’s a corker. In fact, they’d a few recipe’s from it in this weekend’s Sunday Times Magazine, including one for goat’s cheese baked in a walnut pastry with a fig relish, which I thought looked good.

On that chicken wrap thing, check out Catherine Phipps’ saffron marinated chicken with charred lime, saffron and garlic butter flatbread ting on The Telegraph’s webpages (among other grilled things).

And, finally from the regular papers: I do love a good gnudi, particularly if it’s as much about the ricotta dumpling as it is the simple sauce. Felicity Cloake’s ought to be perfect.

I bet these tamarind and palm sugar popsicles with chilli salt are an absolute flavour bomb.

I love that the New York Times gives Samin Nosrat space to write about food, and not just room for a recipe. Also the words she fills that space with. Read this on the power of apricot kernels (noyaux).

Enjoy these smoky steak and spring onion nachos, then subscribe to Pit Magazine to fulfil all your summertime BBQ lust.

Need another idea for your tomato salad? This chilli-fennel oil idea on Bon Appetit’s website (c/o Alison Roman) got me thinking. 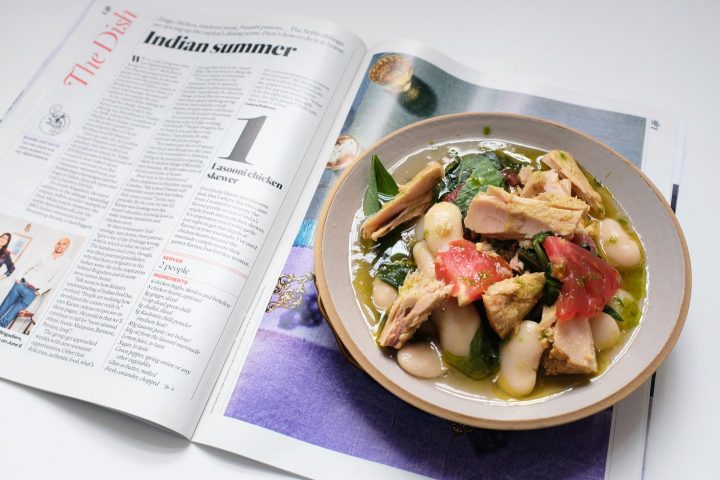