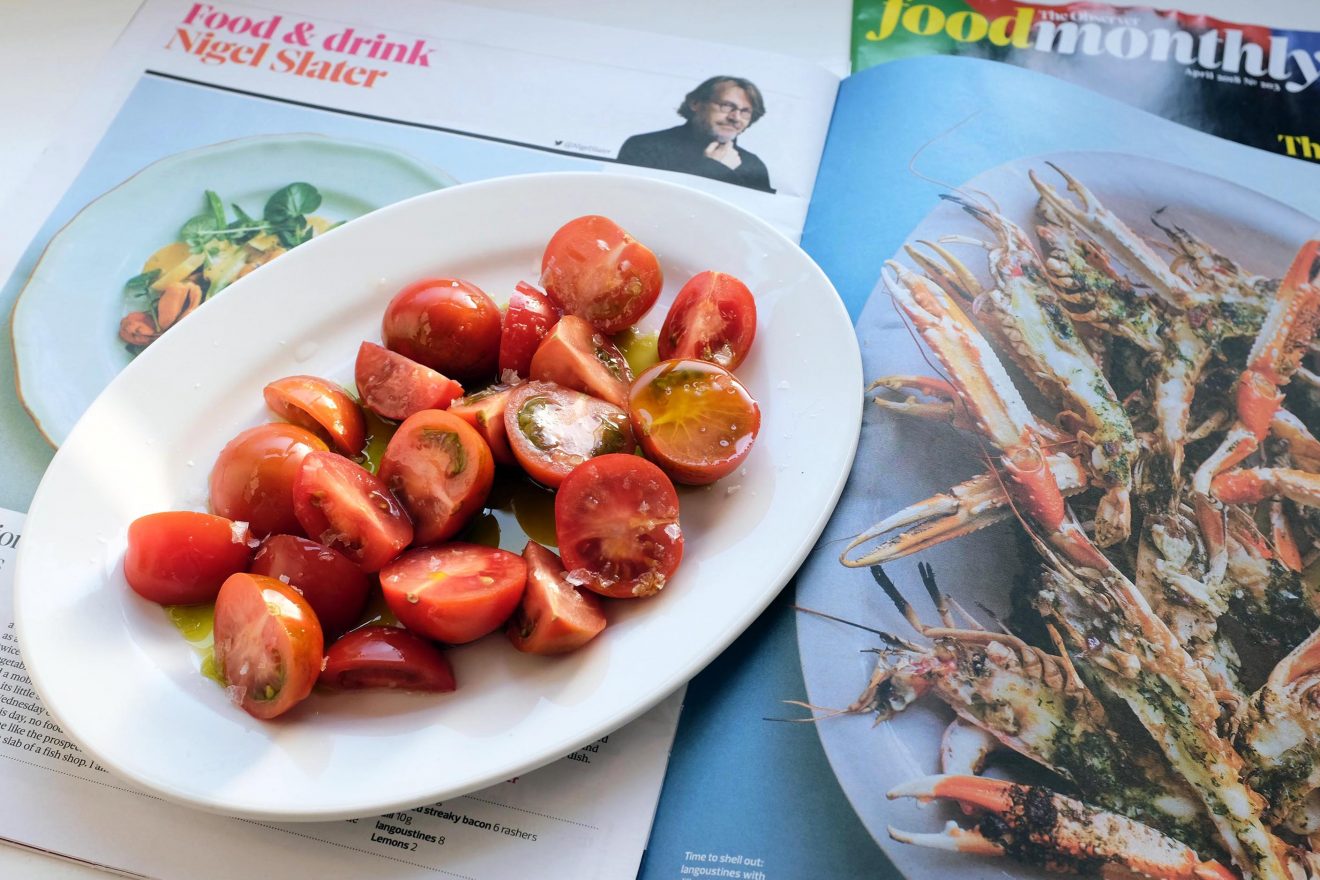 The latest selection of recipes from the weekend papers didn’t, I have to say, feel particularly stellar. But we’re still waiting on Telegraph recipes to be uploaded, so that might change. And in any event, the week’s menu actually ends-up as an intriguing and mighty tempting one, to my tastebuds at least (herring rillettes, lightly spiced spring lamb stew, ancho chilli, tangerine and caramel flan).

The Sunday Times housed three dishes from Kricket’s ‘Indian-inspired’ cookbook. Two of them are memorable dishes from the restaurant, and all three look delicious. But will you be inspired to make them at home? For Bhel Puri there’s a lengthy set of ingredients for making the two chutneys that go alongside Kricket’s mix of yoghurt, fresh mango and store bought bhel and sev; and even more steps involved (unsurprisingly) for their excellent Keralan fried chicken and curry leaf oil and curry leaf mayo. Spiced snake beans with peanuts is simpler, and actually a very good side to have in your armoury (just use green beans)

A day earlier, the Saturday Times Weekend section collated six recipes from the Skandikitchen’s Bronte Aurell. Hard to really get the gist of them without context (this supplement never includes recipe introductions), however, mushroom quiche and ‘Wallenbergare meatballs’ looked decent.

Meanwhile, Donna Hay was back in the glossy magazine doing ‘fast’ ‘healthy’ ‘easy things in her eclectic, worldly manner. This selection was set out as a fairly bullish menu plan for the week. I was drawn to Saturday’s roast pork with miso mushroom sauce and sesame kale, Wednesday’s polenta with courgettes, prosciutto and provolone, and Monday’s chilli and lime pork neck skewers on sushi rice.

In ‘most unexpected recipe-t0-chef match of the week’ Stephen Harris offers Viennese whirls — the sandy piped spirals you’re more likely to associate with Mary Berry and Good Housekeeping manuals, than the chef-patron of the Sportsman. All is explained within the article, however, and by the end of it you’ll be pining to try his recipe, embellished with custard and raspberry sauce.

Diana Henry offers three options for the ubiquitous salmon fillet. The salmon fillets with Indian spices and coconut sauce calls out to me. I also really like the idea of adding cornichons and mustard to lemon and parsley’d breadcrumbs, topping the fillets and roasting them over green beans.

Yotam Ottolenghi led the Saturday Feast magazine’s ‘slightly cheat this classic dish’ issue with a mighty intriguing tangerine and ancho chilli flan (Spanish speaking creme caramel). The ‘cheat’ element was that he didn’t make a classic custard, just wazzed it all up in a blender first. Also a one pot Puttanesca that’ll have the whores of Naples rioting.

Meera Sodha’s vegan cheat was to use butter, milk and 90 day aged steak to ensure her vegan jackfruit tacos with fried corn and hot cashew sauce taste awesome. JOKE. Actually, she simply used tins of brined fruit rather than the fresh version, and the recipe looks vibrant and layered, and so I’ll get some of those and continue to wonder whether (and how) to take on the jackfruit at my local greengrocers.

There were other ‘hacks’ too, including Anna Jones suggesting four ways to pimp filled pasta, as well as an enticing (and easy) lentil and mozzarella lasagne. Ruby Tandoh making creme brûlée from instant custard, and a bunch of puddings I’ve not yet seen but will look out for when the links go up through the week.

As I imagine many others were, I was taken by the picture of Nigel Slater’s assembly of mussels, potatoes and peas, and of langoustines with bacon butter in the Observer Magazine column. Sneaking on to the end of these recipes (there’s usually only two) was a method for herring rillettes (grated carrots, sushi ginger and other bits) that I reckon sounds absolutely cracking. Also, his mid-week idea is for paneer, cashew and aubergine korma, which I think you’ll find is worth checking for on the Guardian website later in the week.

It was an Observer Food Monthly Sunday, so there were more of Nigel’s recipes in the vegetarian and vegan green themed issue. I loved the look of the spring green lasagne, and also roast new potatoes on creamed spinach.

Among Chantelle Nicholson’s vegan recipes in the same supplement, sage and shallot puff tart and peanut butter puddings with peanut caramel and dark chocolate sorbet looked good. But what is non-dairy butter?

Also, btw, this year’s OFM Awards are open for nominations and recipe submissions.

Finally from the English broadsheets, there were some mighty inviting words from Itamar in the FT Weekend Magazine (always sense he writes with a smirk) on the subject of lamb neck stew/broth. His spring-suitable version of this includes fresh garlic, broad beans, squash and a mint salsa, though it’s the use of cinnamon and cardamom pods that distinguishes it for me — certainly taking it away from the French style dish I’d naturally end up with. “The lamb is cooked to soft submission, the cooking liquid turns into a delicious, rich broth with broad beans bobbing about. The squash provides sweetness and a bit of heft, and they all sit so comfortably together in a bowl, just made to be eaten on a sofa.”

Things I’ve fallen upon over the last week while browsing the cleaner corners of the internet:

Olia Hercules got another piece in The New Yorker (high fives), this time on the pleasures of eastern European and central Asian dumplings, concluding with a recipe for manti (x20). “A cook who decides to make these has to really want to please whomever they’re feeding. But that is one of the reasons why dumplings are so enjoyable to eat.” True say.

Within this Bon Appetit brunch collection: the chilaleques with blistered tomatillo salsa and eggs; the chickpea pancakes; the carrot pancakes; the eggs in purgatory; and the spiced chickpeas with cashews, pita and brown butter yoghurt. 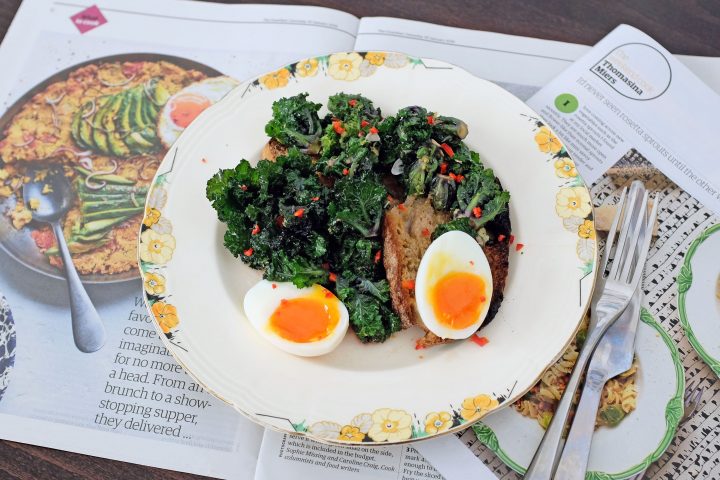 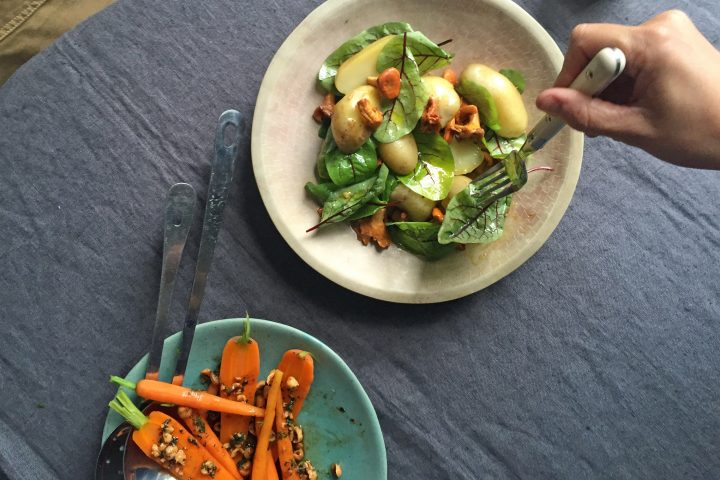