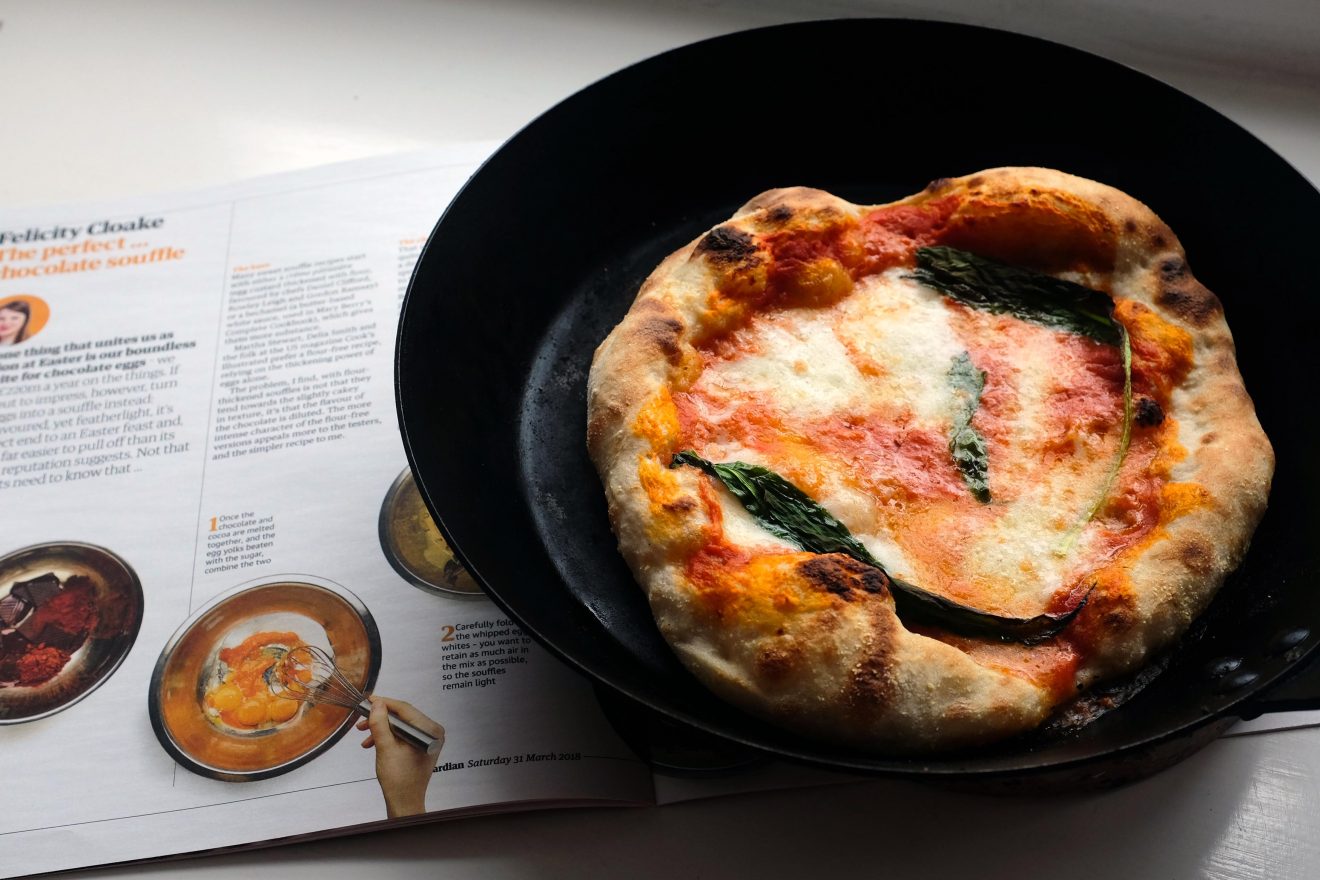 Easter featured as the theme for a sizeable portion of this weekend’s recipes. Which would make them redundant now, were the culinary pillars of this particular festival fairly spurious (Easter? Err, how about some lamb??). Ignore, then, the sheepish reason for the dishes on offer, and bookmark at least a handful of them to try out over the coming month or so.

A year’s worth of lamb recipes over one weekend

It was pleasing to see Tom Kerridge blanch his wild garlic before blitzing it into a green sauce to go with slow-cooked lamb shoulder — too many recipes suggest it’s a good idea to eat this allium raw, when it really, really isn’t. I also like Tom’s idea (all for The Telegraph, btw) of spreading rum butter on home made hot cross buns, and his fairy classic bread and butter hot cross pudding. I can’t, however, support the suggestion that you should spend your time making smoked salmon Scotched quail’s eggs. No, no. No, no, mo.

Staying on the Easter theme, in the Sunday Times Magazine Candice Brown offered “little nests of cupcake goodness … full of surprises and flavour” but I stabbed my eyes out after reading that so can’t tell you how they were or what else was in the mix.

Not lamb, but family feasting

Nigel bucked the lamb trend and said Easter calls for a roast bird, presenting Observer Magazine readers with guinea fowl stuffed with herby fregola and served on mint and parsley flecked peas. To be followed by a choclate mousse layered with ginger biscuit crumbs.

Stephen Harris’ recipe for roasting pork shoulder on boulangere potatoes is a hearty but simple one. Pleasing, too, that it looks like we’ve come through the period where any and every shoulder of pork must be cooked until pullable, rather than sliced; to my mind this is a  brilliant Sunday joint in the latter format (and those potatoes and onions after four hours under the meat, well …).

My mum will be delighted to see Sir Ottolenghi refer to a classic of my childhood — chicken baked in condensed chicken soup and Hellmann’s mayonnaise. Perhaps you think that sounds grimly ’80s, but my memory of it (and no doubt Yotam’s colleague Esme’s) is a fond and finger-licking one. His updated version of this culinary highpoint is a coronation chicken and broccoli bake, which uses cream and stock, rather than soup and mayo. And I really quite like the idea of it. Other chicken recipes in his Guardian Feast column include non-fried fried chicken and roast chicken with a miso glaze, sticky rice and kimchi.

In the same supplement, Felicity Cloake offered the ‘Perfect’ chocolate soufflé for the Easter weekend (and beyond). I like how she breaks down this dish to it’s actually relatively simple constituent parts, hopefully dispelling for many the worry that it’s an overly difficult option.

Saturday’s Telegraph housed an eclectic mix of things for children to cook over the school holidays (with adult supervision if wanted). These were courtesy of Claire Thomson, and it was refreshing to see it suggested that kids should cook things like lahmacun, porridge bread and churros. I guess you might want to stand relatively close by during the deep-fat frying of the latter.

You’ve ordered your copy of Diana Henry’s How to Eat a Peach already, right? Mine arrived on Saturday and I’m very much looking forward to tucking in. As it happens, Sunday’s Stella Magazine had a second extract from the book, which was as tempting as the interview and first menu seven days before. I love the idea of blitzing radishes into butter before spreading that over rye bread and topping with caviar; crab with mayo and new potatoes is one of those simple yet luxurious dishes; and you just know the buttermilk and strawberry ice cream will be a sweet, sharp, smooth and crowd pleasing finish. Basically: all inventive and interesting yet totally achievable ideas, as is her style, particularly when in cookbook format.

So many truths in Rachel Roddy’s Feast column, and all of them elegantly put, not least the opening gambit: “I want pickles most when we don’t have any.” Her musings on the subject of home pickles is well worth a read — look out for it online later in the week — and her method for a preserved mix of seasonal vegetables (la giardiniera) one worth following.

Also in Feast, a good selection of six spring sides (*cough* some glaring omissions too …), not least Fern Verrow’s courgettes in saffron and basil butter, and Margot Henderson’s braised fennel and olives (4 fennel bulbs and half a bottle of wine for 6 people seems pretty generous, mind). Plus Anna Jones’ cannellini beans on flatbreads topped with wilted spring greens and plenty of herbs.

The pear upside-down cake proposed by Rowley Leigh in The Financial Times Weekend Magazine looks magnificent. Reading the recipe, too, you can tell it’s a Proper Job — bake halved pears for three hours; grind a mix of almonds and hazelnuts to combine with desiccated coconut and flour; cream the butter and sugar for no less than eight minutes; take the caramel as far as you dare, coat the base and sides of the cake tin evenly, “work quickly”. Some might think the anality of the recipe instructions too much for a weekend aside, but I’ll defend his right to be precise and helpful. AND YET it strikes me as odd that this recipe is being suggested in April, not September or October, and that any pear variety will do, as I’m fairly certain it won’t.

Corr, look at Olia Hercules’ Easter menu over on Epicureous. Lamb again, yes, but with a herby, preserved lemon rub and then loads more herbs to finish. Before that, beetroot salad with pickled mushrooms and caramelised shallots; plus a poppy seed and pecan strudel for afters.

I like the look of Bon Appetit’s chickpea and chorizo tostados.

And there’s an interesting dip idea on Saveur for those who are interested in fermenting some butternut squash, then blending it with more squash (steamed), tahini, amchoor and onion powders, paprika and fennel pollen and then serving the eventual purée with crackers and crudités.

(with a platte of silky culatello) 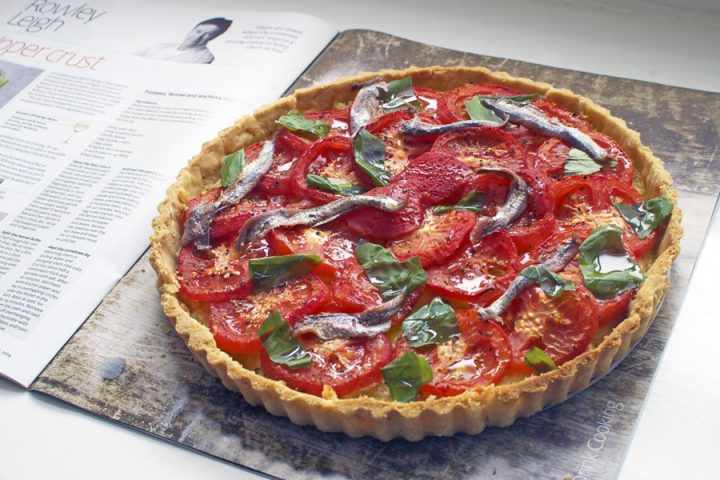 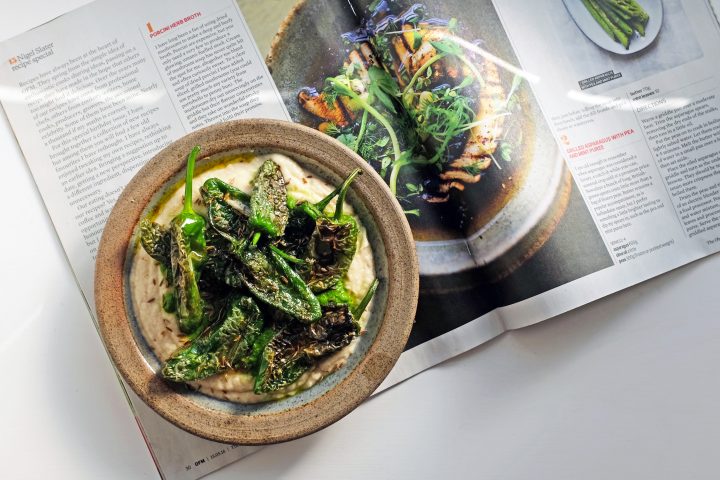