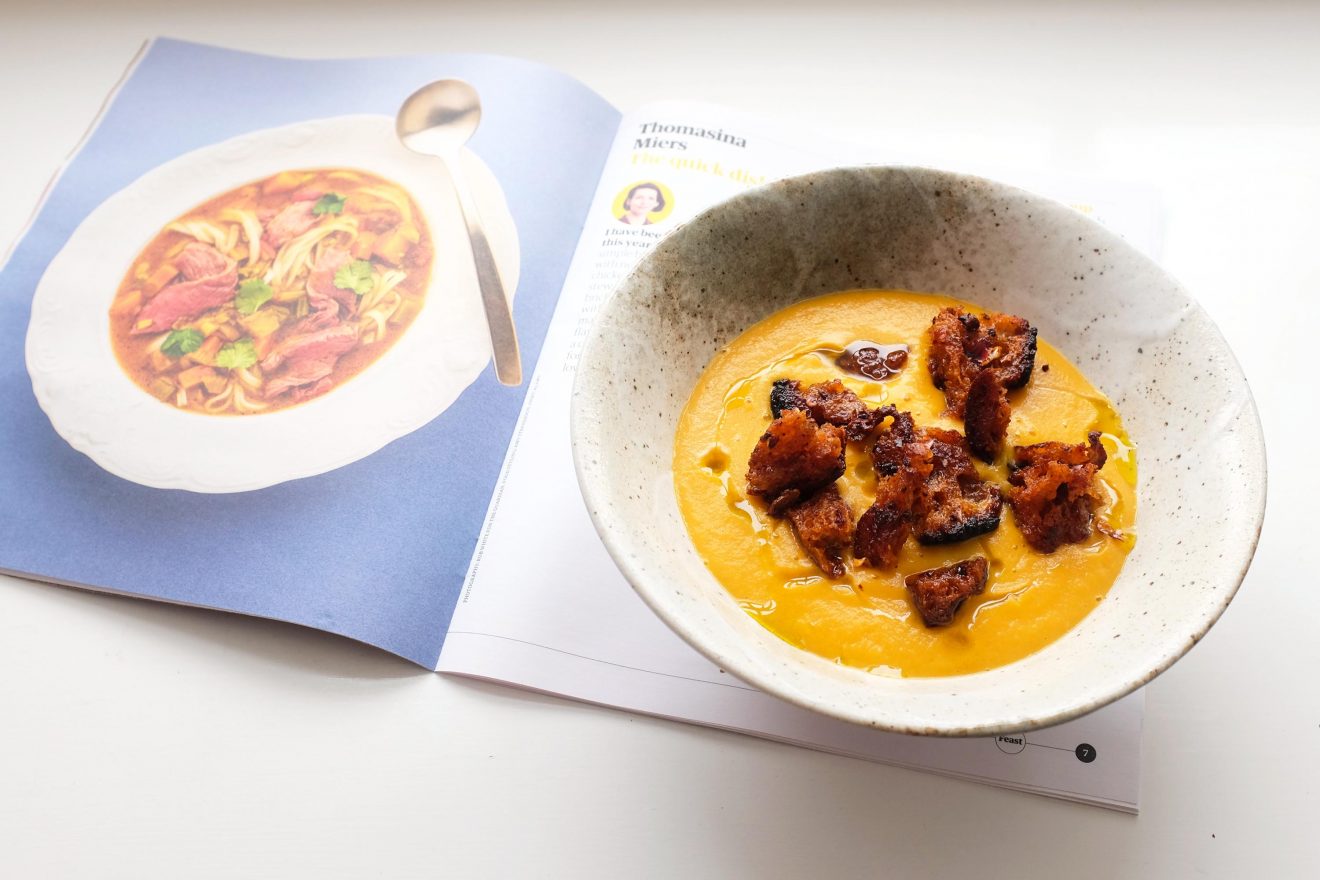 The weekend’s recipes digested — by paper, this time.

As always, plenty to look out for, including things involving pies, stuffed peppers, chicken livers, kofta and breadcrumbs.

Saturday’s Times Magazine saw a selection of ‘simplified recipes’ from the menu at Hind’s Head, Bray — one of Heston Blumenthal’s ‘pubs’. Assuming things weren’t lost in translation from chefs to page (they so often are), there are a few good things in here — mini oxtail and kidney puddings, and a smart looking chocolate ganache tart on a hazelnut and orange base, for example. I’d hazard quails egg Scotch eggs are a fiddle too far, though. And the suggestion the potatoes to go with the chicken should be roasted in olive oil threatens to undermine the whole lot.

The Sunday Times magazine was packed with recipes (one of their monthly ‘The Dish’ collections). Classic French desserts courtesy of Ray White (lemon tart, creme caramel, chocolate delict), though I have to say I was more taken with the humbler Greek dishes from Mazi restaurant, included gemista (stuffed peppers), courgette fritters with cucumber and mint dip, crispy lamb belly with miso glazed aubergine and hummus.

Also in that glossy, there were multiple recipes for quick, dried pasta dinners by Stevie Parle — all simple and bound to be tasty, such as crab and monk’s beard spaghetti with sprinkles of fennel and chilli seeds the key. Those same sprinkles came into play alongside buffalo mozzarella and oregano in my pick of the pack: sausage and herb conchiglie (the shell-shaped one).

And good to have an extract from Jenny Linford’s new book The Missing Ingredient: the curious role of time in food and flavour, which is a fantastic concept and I look forward to reading it in full.

Itamar Srulovich reckons his and Sarit Packer’s apple and miso cake with miso butterscotch is the apple cake recipe to end all apple cake recipes. It’s be a big claim, though I suspect more time has been put into apple pies and tarte tatins, so this may be a low hanging fruit cake. Also, the Honey & Co duo do seem particularly good at baking.

Seemed to be a mostly old school, humble, British weekend on The Telegraph’s food pages, if their website is anything to go by.

Seven pie recipes heralded the start of British pie weeks (one of the few ‘weeks’/’days’ I can get behind). Interesting selection, too: rhubarb, orange and pistachio pie; broad bean and artichoke pie; apricot crostata (is this a pie?); rocket, squash (WAHAY) and gorgonzola spanakopita; Armenian flatbread, chicken and herb pies; leek and goat’s cheese (looks a bit like a tart/quiche…); and an Aussie bacon and egg number.

So on to the Graun.

Highlights of Feast include Rachel Roddy on the joy of eating fried things with our fingers and Felicity Cloake’s dissection of the perfect syllabub, and Meera Sodha’s leek, mushroom, kale and pea subji. There were also six pickles from Claire Lattin of Duck Soup etc fame, which you should absolutely look out for whenever it gets loaded online — kohlrabi kimchi, a cumin and onion seed spiced carrot kraut, lime pickle and kombucha.

Of course Anna Jones was in there doing superb things with vegetables (AGAIN) — a vibrant chopped kale salad, and leek, tomato and butternut bake, both topped with breadcrumbs for added crunch. Tommi Miers’ noodle and beef-ified Mulligatawny soup tempts.

And though it’s proof that even the prettiest mince meat patties look like poo when pushed into a log shape, I really like Yotam Ottolenghi’s lamb, harissa and hibiscus koftas.

Joe Trivelli is head chef at the River Café. From time to time he slots in for Nigel in the Observer magazine, and always does a cracking job. This time round, a Russian salad using tuna to stabilise the homemade mayonnaise, and adding romanesco broccoli for colour and crunch; chicken livers with preserved peppers and vinegar (such a good combo); then dried figs soaked in spiced vermouth, served with egg enriched mascarpone, cocoa and hazelnuts. Gorgeous. Think I read somewhere that he has a cookbook out this year — watch out for that one.

And finally soups: if you picked up a paper copy of the Observer, or keep clicking onto the Guardian website through the week, you’ll see twenty soups. From the first few released online it looks a, err, super selection. Note, in particular, Ali Borer’s d’tom nam yam sai, Olia Hercules’ borscht, and Ping Coombes’ curry laksa.

And his colleague Samin Nozrat’s cutely portmanteau’d soufflazy. (As ever, as much for the explanation of why food works as for the recipe).