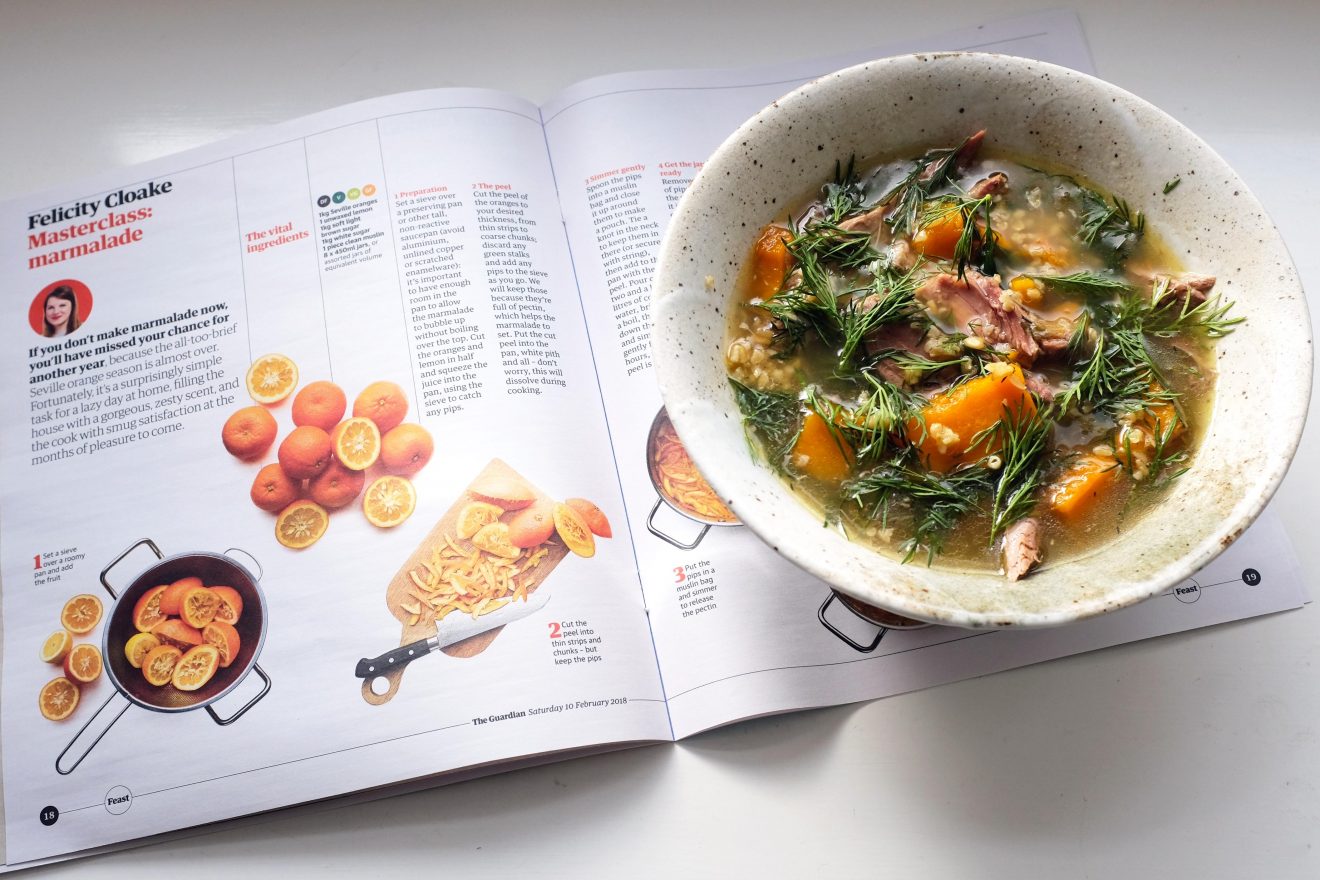 As predicted, the latest set of recipes from the papers were full of pancakes and soppy Valentines menus (though it was surprisingly quiet on the Chinese New Year front).

Now I maintain that the only option for pancake day is lemon and sugar. BUT if you are thinking of straying, the extract from Sue Quinn’s book Posh Pancakes on The Telegraph‘s website covers all the bases very nicely indeed. There are some really good ideas, including buckwheat galettes with figs and gorgonzola, chestnut flour pancakes with ricotta and honey (nice), and buttermilk pancakes with honeycomb butter. Dust them off once Shrove Tuesday’s been and gone.

Yotam had a crack, too, in the opener to this week’s Guardian ‘Feast’. Crepes with bananas and Barbados cream (rum innit), plus turmeric dyed pancakes topped with coronation chicken and paneer greens (can’t help but think rice would be a better partner than the pancakes). The centrefold of Feast included six other pancakes, of which the plain with lemon and sugar is the best. Not that I want to sound like a broken record.

Oh, wait, one more: Meera Sodha’s ‘new vegan’ option in Feast was a Korean-style kimchi pancake (jeon) with shredded spinach salad and a dark soy, sesame and rice vinegar dipping sauce and damn it I think against my beliefs I’m basically going to have to make this on Tuesday. Keep an eye on their website and print/copy paste as soon as the recipe goes up.

Real life rrrrrromancers Itamar Srulovich and Sarit Packer presented FT Weekend readers with a Valentine’s cake “for those staying in” … “it is chocolate and orange, another couple that should not work together but does“. Also, two layers, cardamom, flecks of chocolate, mascarpone cream and very, err, lovingly, serves eight.

The Sunday Times Magazine also housed recipes for Valentines Day; in this instance courtesy of Sarah Raven. I’m right behind her turbot and sorrel sauce main course, but undecided about the suitability of winter herb tempura for an amorous occasion (love deep fried sage, parsley, PSB and anchovies, but is the whole egg white and shit tonne of hot oil a bit of a faff on V day? Dunno). Her upside-down pecan and cranberry tart/cake sounds great but once again, it works on the assumption that leftovers for breakfast is on the cards.

Nigel’s chocolate, flapjack, blood orange and salted pretzel sundaes had me at flapjack (though are surely more likely to lead to a snooze than coitus).

Rachel Roddy noted that cacio e pepe is best made for just two people. She also provides two ways of making it (add the cheese to the drained pasta OR add cooking water to cheese, then toss pasta through it). When the Graun put it online I’ll add a link.

I meant to put a monkey on someone suggesting chocolate pots on their Valentines menu — and indeed there they are on Tom Kerridge’s menu in The Sunday Telegraph. TBF they look pretty lush, with a dash of port in the mousse and a cocoa, flour and almond crumble for the top (good idea, chocolate pots are SO boring after two spoons). I like his crab on toast with apple salsa, and grilled whole plaice with anchovy and pecorino butter too.

Eh, what, nothing? Well, there was something from Xu in The Telegraph, I think, but not online. Otherwise it’s down to the New York Times (see below).

Nadiya put some dried fruit and nut in a basic sponge and called it an ‘all butter cake‘.

Ruby Tandoh gave Feast browsers cherry blondies with bay cream; and Felicity Cloake provided a marmalade masterclass (curiously not a ‘Perfect’ one, though), which I think is worth considering if the Sevilles are still at your grocers.

I’m fairly certain we saw multiple extracts from Rick Stein’s Road to Mexico at the tail end of last year, so it was a little surprising to see more of the same in The Times Magazine. The recipes included a monkfish, mussel and prawn stew, which could surely have featured in any Stein book (is it the green pepper or the 1/2 teaspoon of chilli flakes that Mexicanised it?). Ditto mackerel with mandarin and herb salad; oysters with a chilli, coriander and lime dressing; and crab and avocado omelette. I liked, though, the grilled sea bass, smeared half with green and half with red salsas.

Tommi Miers’ quicky in Feast was grilled lamb steak with celery, chicory and fennel salad. Anna Jones’ offered up an ace lemon pickle, plus a bitter leaf and citrus salad — which she makes different to the norm by adding griddled bread and charred clementines, along with a garlicky and rosemary balsamic dressing. (Links to both of these when online). Also from Feast, The first four weeks of Rosie Birkett’s quick winter lunches are now all online. Have a go at the lentil, celeriac and apple salad.

Finally, Stephen Harris’ offering to Telegraph readers this week was a pear cobbler — the addition of ginger biscuits blitzed to a flour-like powder is quality.

I’m going to direct you to the entirety of the New York Times’ weekly email, because there are a few links in it worth clicking. Not least a couple of recipes that take their lead from the Winter Olympics (a theme I don’t think any of the British writers picked up on — unless Meera’s submitted her pancake for that reason, but it got shoehorned into Shrove Tuesday), such as Roy Choi’s galbijjim. Longevity noodles with chicken, ginger and mushroom might do when you ring in CNY. Though ideally they’ll also be on the table with whole steamed fish and all the aromatics. 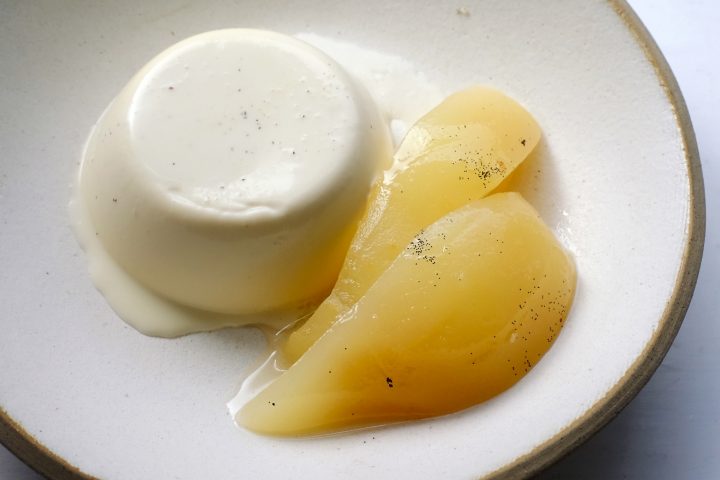