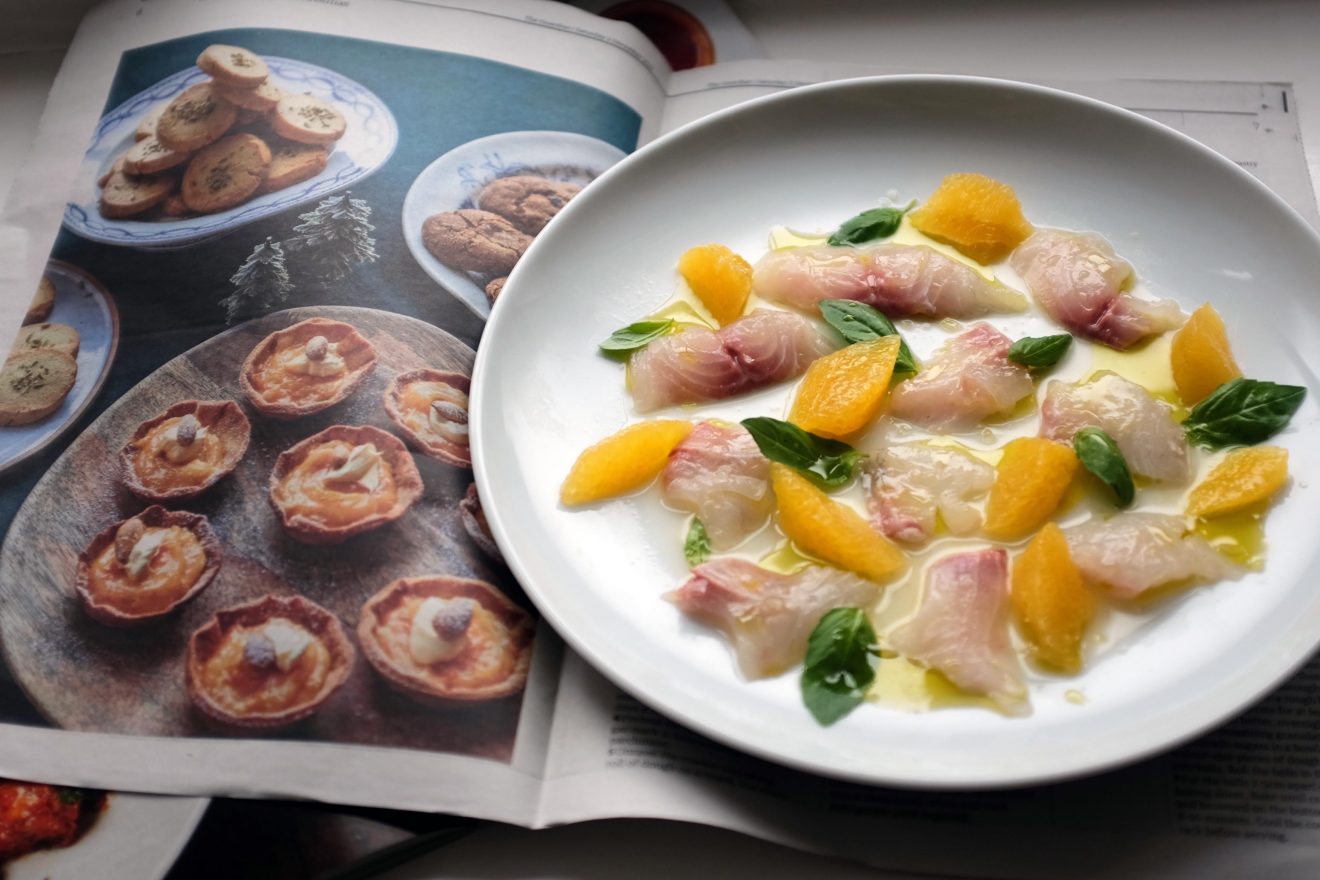 All sorts of stuff this weekend … but mostly festive meal plans. If you don’t intend to simply return to the well-worn pages of Delia Smith’s Christmas (Holy Holly, it’s 27 years old), there are certainly a few ideas to spark your menu planning over the next few weeks. Eyes out for Jeremy Lee’s puds, both Diana Henry and Florence Knight’s sides, and Meera’s mole.

… Acch, well, no it’s not. The Cook supplement was handed over in its entirety to King of Puddings, Jeremy Lee. Now I feel he might have been somewhat constrained, as if he really were providing your sweet endings this Christmas, everything would come with lashings of custard, double cream and ice cream. But, still, his twelve Yuletide treats included the only Bûche de Noël recipe you need this year, spiced upside-down pear cake, chocolate, ginger and orange tart, and a mincemeat meringue tart. Online in 4 parts, 1, 2, 3, and 4.

Meera Sodha’s column caught the eye, too — both for the butternut squash and black bean mole with lime-pickled onions, and the reminder that not all recipes should be quick; sometimes, it pays to take your time.

In the Observer, Nigel Slater offered a recipe to suit the weather: beef short ribs with a red wine and rosemary marinade, sharpened with a heavy glug of pomegranate molasses. These go on top of a parsnip and carrot mash, with pine nuts for a savoury bite.

A host of different hot sauces among Yotam’s recipes this weekend. The tofu and French beans with chraimeh sauce intrigued.

I like the idea of the black pepper-heavy roast chicken that is the centrepiece of Thomasina Miers’ recipe, though maybe like the radicchio leaves, Jerusalem artichokes and garlic wilting, browning and sweetening underneath it even more.

Always one to bring things back to the conventional, Rowley Leigh’s FT offering was a word or two and a recipe for homemade mince pies. Half butter to flour and a splash of cold water for the pastry; which should be filled with shop-bought mincemeat pimped with walnuts, brandy, stem ginger plus its syrup (nice touch).

Diana Henry suggested her Sunday Telegraph ‘Stella’ Magazine readers sack-off the canapés and make a feasting spread. By which she meant, I think, don’t faff around with a preamble of fiddly stuff like smoked salmon on blinis or mini vol au vents; instead make a load of sharing dishes for everyone to dig into. It’s more efficient and more gratifying to boot. This particular menu has a north African vibe — think tagine, couscous and lots of interesting ‘sides’ (like squash with a preserved lemon and olive salsa), a really good ice cream idea (Turkish coffee, condensed milk and cardamom), and a neat cocktail too. And my favourite ever quantity comment/serving suggestion: “This is for 120 sausages but, honestly, everyone eats them.” and then “Serves 8“. Challenge accepted.

Also in The Telegraph, it was Stephen Harris’ turn to take the nut roast baton, and there were some regulation festive cakes from the latest Bake Off winner.

The Sunday Times’ ‘The Dish’ section provided a Santa Sack of recipes.

Florence Knight took point and did the whole turkey and trimmings timeline thing. A glazed ham as well. I liked her roasted sprouts with lemon butter and chicory tarte tatin (for the veggies).

Candice Brown proposed a yule log with blackberry jam and vanilla cream in between. Per before: Jeremy’s Bûche.

There were snippets from Nigel’s Christmas Chronicles. As I mentioned last week, grab the book, though you are allowed to take a look at the cranberry, juniper and rosemary focaccia as an appetiser.

Georgio Locatelli’s Christmas centrepiece is a whole baked sea bass. Raymond Blanc’s, a rib of beef with celeriac purée and red wine jus. As an aside, the jus element includes two shocking-near-criminal instructions: (1) the addition of a single tarragon leaf (a “sprig”, surely?) and (2) that it should be made from a full-bodied red wine that shouldn’t have cost more than £5. Come on Rambo (and come on editorial), can you even buy a bottle of red for £5 these days? It is telling that the longer in the tooth shleb chefs keep churning the same advice they gave in the late Eighties (i.e. in part everything has been done already, but also they’ve not much more to say); and being generous this is a lazy and unhelpful comment. Much better to write: “don’t cook with wine if you wouldn’t drink it“, and “most things below £9 represent terrible value“.

I was reminded yesterday of Emma Gardner’s lovely blog Poires au Chocolat. She’s stopped updating this a while ago to concentrate on real life, but her site is still operating and full of quality content. I might have a crack at these mincemeat squares over the next few weeks.

Cool presentation of a Normandy apple tart on Helen Graves’ Food Stories blog, plus interesting inclusion of random peppercorns in the pastry and less random cardamom with the fruit. Also a shout out for Shine for Shelterbox.

Finally, this isn’t really a recipe, but if you’ve 25 minutes you should watch the latest episode of Max Haley’s Sandwich Show made by the Vice food channel, Munchies. Easily the best cookery/food tv I’ve seen for a LONG time. Give that man a role on primetime (well, after the watershed but on one of the big channels).

Artichoke and pea soup, with chestnut, cranberries and redcurrant jelly