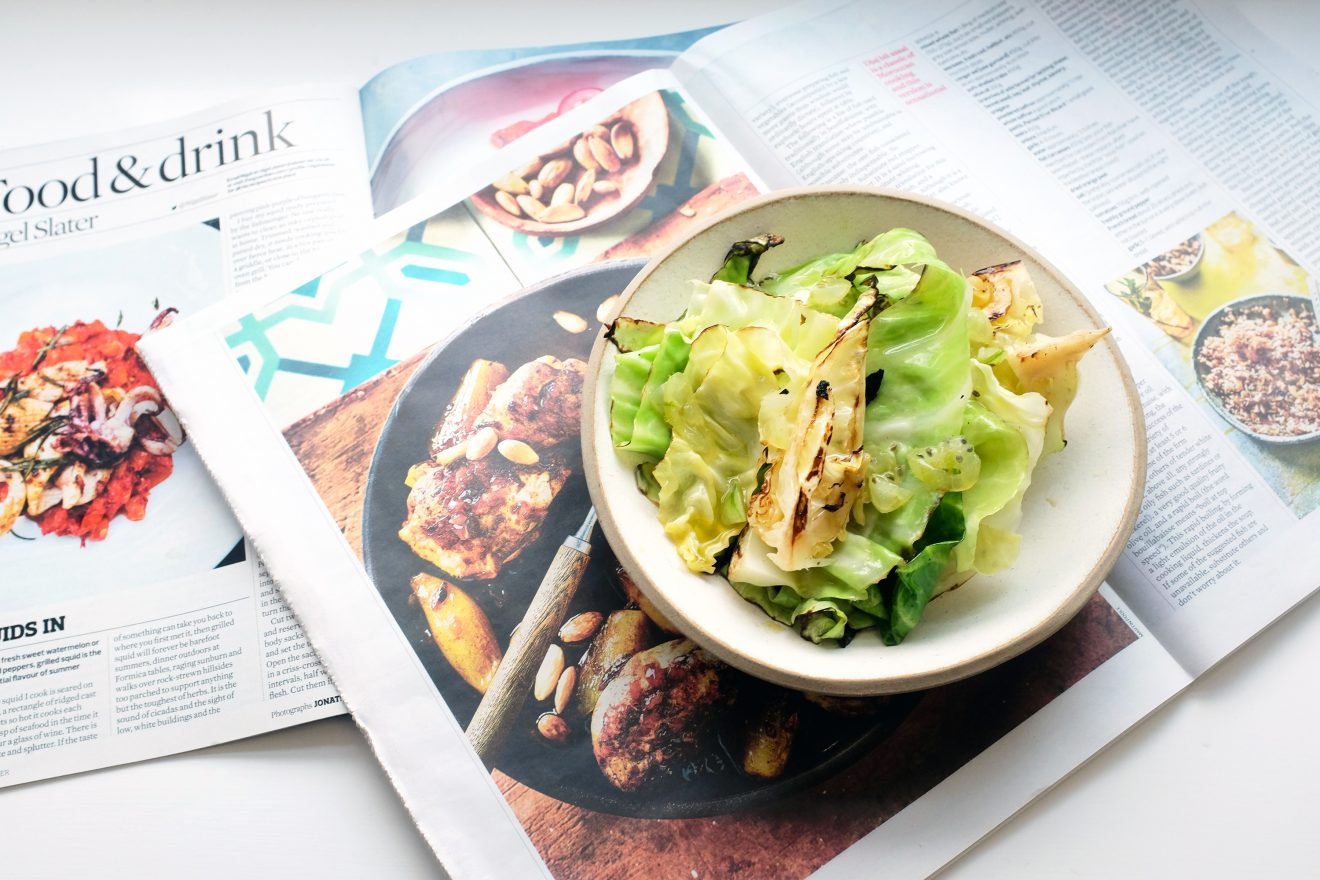 Plenty of good recipes this weekend. Eyes out for Rowley Leigh’s duck, Diana Henry’s tart berry puds, plus extracts from two hotly anticipated books on Italian cookery, by Rachel Roddy and Tim Siadatan. Also, hang tight over the next few days whilst the Observer drip their 20 Best Mediteranean recipe extract onto the internet; it included some cracking recipes from the likes of Claudia Roden, Anissa Helou and Marianna Leivaditaki.

All change at The Sunday Times. Well, slight change. Their monthly supplement ‘The Dish’ has retreated into a monthly food special within the main magazine.

Within that section, Tim Siadatan shared pasta recipes from his forthcoming book Trullo — named after his first restaurant, though Padella-style pasta is a hook. Look to the likes of pumpkin and ricotta gnudi, smoked eel, lemon cream and parsley tagliatelle, and tagliarini with baby artichokes. There’ll be more than pasta in the book, mind.

Candice Brown has a cookbook coming out too. ‘Comfort’ baking. Individual banoffee pies with a filo case look cute.

And there were salads from the American website Food52’s book too: the likes of grilled peaches and apricots with kale and prosciutto, and a spring vegetable panzanella involving asparagus and a kind of pesto and I suppose has missed the boat a bit for another year.

Saturday’s Magazine housed a second load of recipes extracted from Nadiya Hussain’s new book / TV show. Initially not much of interest, but as I scrolled down the page there appear to be a few ideas of note: a duck and five spice hand-raised pie; masala eggy bread, and a ploughman’s cheese and pickle tart (quiche), and a kind of summer pudding encasing a semi-freddo (like a berry loaded Arctic snowbomb).

And there were some cheesy things in the Weekend section, also from a newish cookbook. But nothing you’ve not seen before.

I fair fell in love with the detail of Rowley Leigh’s baked duck and tomato — a whole duck stuffed with marjoram, thyme and onion, baked for just a bit so still pink, broken down into portions then finished over duck fat cooked tomatoes, with herb-loaded bread crumbs sprinkled on top. Try this for a summery Sunday roast with a difference.

Though there was an online collection titled “what to cook with chicken, Britain’s new favourite meat[?!]”, the weekend contributors all plumped for sweet things:

Stephen Harris’s summer berry compote and yoghurt sorbet demonstrated his desire for flavour alchemy to happen whilst eating, rather than before: “Whenever I design new dishes to put on my menu, one of my golden rules is to mix things together as little as possible. So in today’s recipe, I make a fruit compote to serve with a natural yogurt sorbet rather than making a red-fruit yogurt sorbet. This means that the combination happens in the mouth – a sort of flavour interface – rather than in the mixing bowl. With the contrasting fruity compote and lactic-acid-packed yogurt resolving themselves in every mouthful, it’s far more exciting for the eater.”

I’m sure she’s a fan of Mediterranean stone fruits in the right circumstances, but this week Diana Henry focused on tart, Northern berries — the likes of blueberries, cherries, and gooseberries, with honourable nods towards specifically Skandi things like lingonberries and cloudberries. I was taken by her German-style gooseberry cake (‘kuchen’) with elderflower cream (though, for transparency, I am alway taken by anything with gooseberries and elderflower in), and the blueberry and sour cream tart looks super — one to try.

Flora Shedden suggested that the time is ripe for mascarpone and berry tartlets and a blueberry ‘panna cotta’ cheesecake on a ginger nut base. I’m all for fridge set cheesecakes over baked New York style ones — probably something to do with the Sara Lee cheesecakes of my yoof.

More berries and sweetness in the Guardian’s Cook supplement, courtesy of Jeremy Lee’s ‘King of Puddings’ column — bain marie set vanilla pots with a splodge of raspberry sauce on top, plus a few unadulterated fresh raspberries on the side. Enticing intro, too.

Over in the main Weekend Magazine, Tommi Miers plumped for raspberries as well. Her sweet offering featured kamut flour scones and an intriguing raspberry, ginger and lemongrass compote. This was preceded by a sweet-sour-savoury assembly, involving roast beetroot, goat’s curd, raspberries, raspberry vinegar and more.

From then, though, it was pretty savoury.

Written here, dishes like “eggs baked in greens”, “potatoes and aubergine cake”, and “potato, onion and caper salad” don’t seem particularly appetising. But head over to the Guardian ‘Cook’, where Rachel Roddy’s hands turn them into the most tempting recipes of the week. This was the first of two extracts from her new book, Two Kitchens, which I have, and which is a literary and culinary joy.

Yotam did well to introduce avocados without mentioning instagram, hipsters or brunch. He did offer an ‘on toast’ option of avocado blitzed with butter and herbs. Also a new way with prawn and avocado (the shrimps stuffed into the hollow, per the ’80s, but this time curried and with lime). Plus a chilled avocado soup and a salad dressing made thick thanks to the fruit.

On Sunday, Nigel Slater’s grilled squid recipes sent me straight to the fishmonger — but they’d run out, so I paid through the nose for some monkfish instead. Had I got some squid, it would’ve been a toss up whether to serve it with rosemary roasted Romano peppers, or watermelon, cucumber and cherry tomatoes. Either way, as he says: grilled fish = “high summer on a plate.”

Oh, and there was a “20 Best Mediterranean Recipes” pull out too. It was good. Look out online this week for Nigel’s squid stuff with judson beans and tomatoes, two Claudia Roden recipes (megaderra and djaj bil assal – look ’em up), Marianna Leivaditaki’s Creten pies, Yotam’s Corsican pie, and Anissa Helou’s sweet walnut coil. Here’s part one. 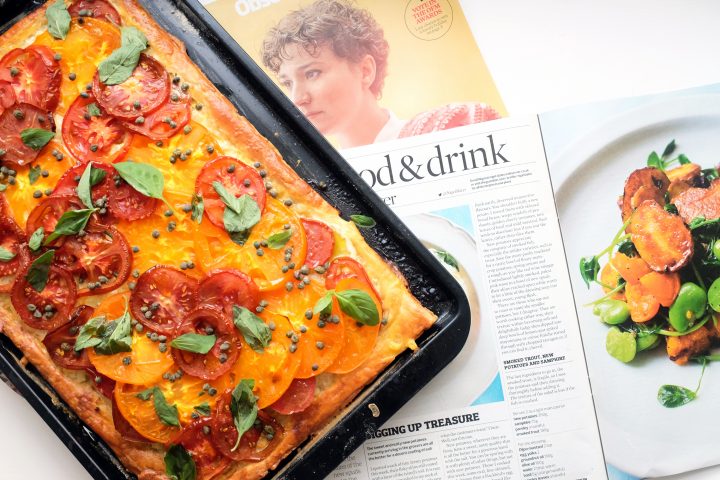