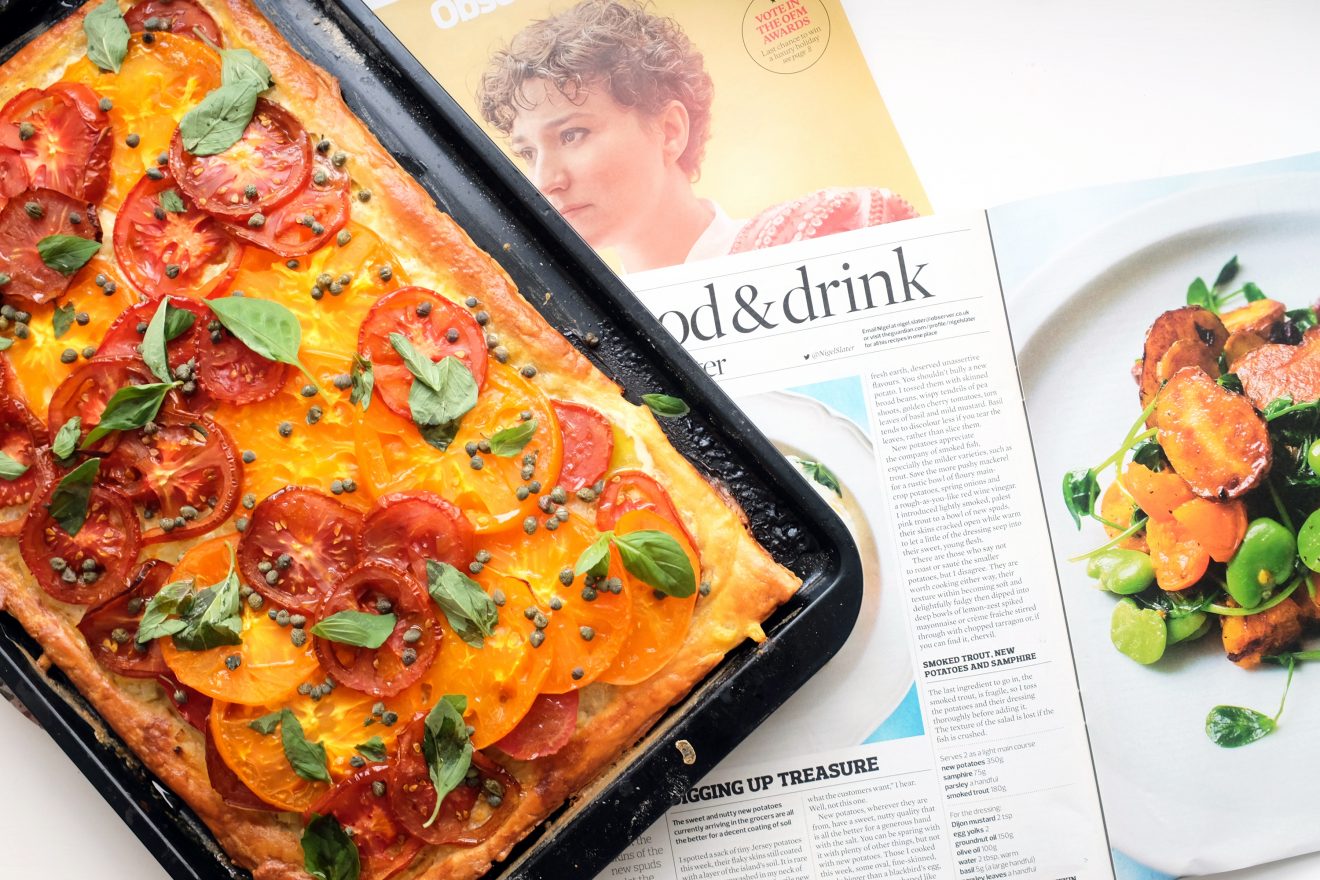 Too hot to even pick up a paper, let alone cook at the weekend? Me too. Here’s a rundown of the recipes for when things cool down a bit.

Diana Henry timed her ice cream sundaes piece to perfection. A cherry and pistachio number looks good, though the mix of Pedro Ximénez, raisin, chocolate brownie and vanilla option would be my choice.

Stephen Harris dissected the Caesar salad, perhaps most interestingly adding a chilled lettuce sauce to proceedings — made by blanching the outer leaves of a Romaine lettuce, then whizzing them up with a little double cream.

Flora Shedden looked at vin santo cake. Campari me up.

Sunday’s magazine was bursting with recipes from Elly Curshen’s new book, Elly Pear’s Let’s Eat. Non-meat meat balls made from blitzed aubergine and breadcrumbs is a gert lush idea. And the smoked haddock tart would be absolutely perfect for lunch today, wouldn’t it?

Candice Brown’s chocolate cake in the same supplement was fuelled by baking powder, avocado, coconut oil and sugar. Might try this — in the hope those things add flavour and texture, rather than kowtow to bunkum wellness theory.

Saturday’s glossy mag recipes made me LOL / cry. “Cut back the calories this summer” … by eating very small portions of perfectly decent food. I liked walnut crusted pork with fig and buckwheat, and celeriac remoulade with salt cod croquettes. The latter sneaking under the 300 cal threshold at precisely 299 calories. Raised eyebrow emoji.

And there were a bunch of light curries and ‘salads’ in the Weekend section. Green beans with cumin and pecan caught the eye. Also a Goan fish curry. Though it reminds me that the vegetable focused food from Meera Sodha’s Fresh India will be spot on during this heatwave.

I see nothing wrong with having pudding for breakfast, and don’t mind admitting that Honey & Co’s coconut and lime pancakes with mango provoked a little salivation. I like that the pancakes involve both yeast and bicarb — should be super fluffy.

As ever, loads of great recipe content from the Graun’s Saturday and Sunday’s crew.

You’d be forgiven for starting and finishing your recipe reading with Jeremy Lee’s apricots poached in white wine. Simple, but take a look at the grocers near you — apricots and cherries are the order of the day, so it’s now or never.

If you’re a baked egg person, head straight to Yotam’s column in the Guardian Weekend magazine. Technically it revolves around chilli butter. But I suspect you, like me, will just keep flicking between the pictures of Cilbir and eggs in chard — paralysed by the decision (or indecision) of what will be made for brunch next Sunday.

Like the look of Tommi’s roast aubergine, tahini, pomegranate and red rice dish in the same glossy.

Nigel Slater’s recipes in the Observer Magazine centred on new potatoes (just simple assemblies, really). I was more taken by his midweek dinner of apricots, focaccia and thick ham, all torn, browned in butter and tossed with peppery leaves.

And then we turn to the latest Observer Food Monthly. Where Nigel promoted making your own labneh (and stuffing aubergine with it. Also serving with grilled chicken and Turkish peppers). He also included a lovely looking baked yogurt and apricot pudding.

You should also look to Rachel Cooke’s interview with the brilliant Nieves Barragan Mohacho — she of Fino, Barrafina, and now her own gig: Sabor (and a new book of the same title). Instructions for octopus are worth following. Though the two recipes that stood out were a chicory, anchovy and salmorejo salad, and hispi cabbaged braised with loads of paprika and slathered with garlic cream (aka posh filth).

On which note: just five days remain to have your say in this year’s OFM Awards. Which means instead of subtle, I plump for shameless: stick “On the Side” in the best new book category, and “@rocketandsquash” in the Instagram section. Ta. Here’s the form.

As well as apricots, we’re entering strawberry glut territory. Edd Kimber’s layered strawberry vanilla and apricot amaretto jam will be a good use of both fruits.

Also, make sure you listen to The Food Programme on Alastair Little.