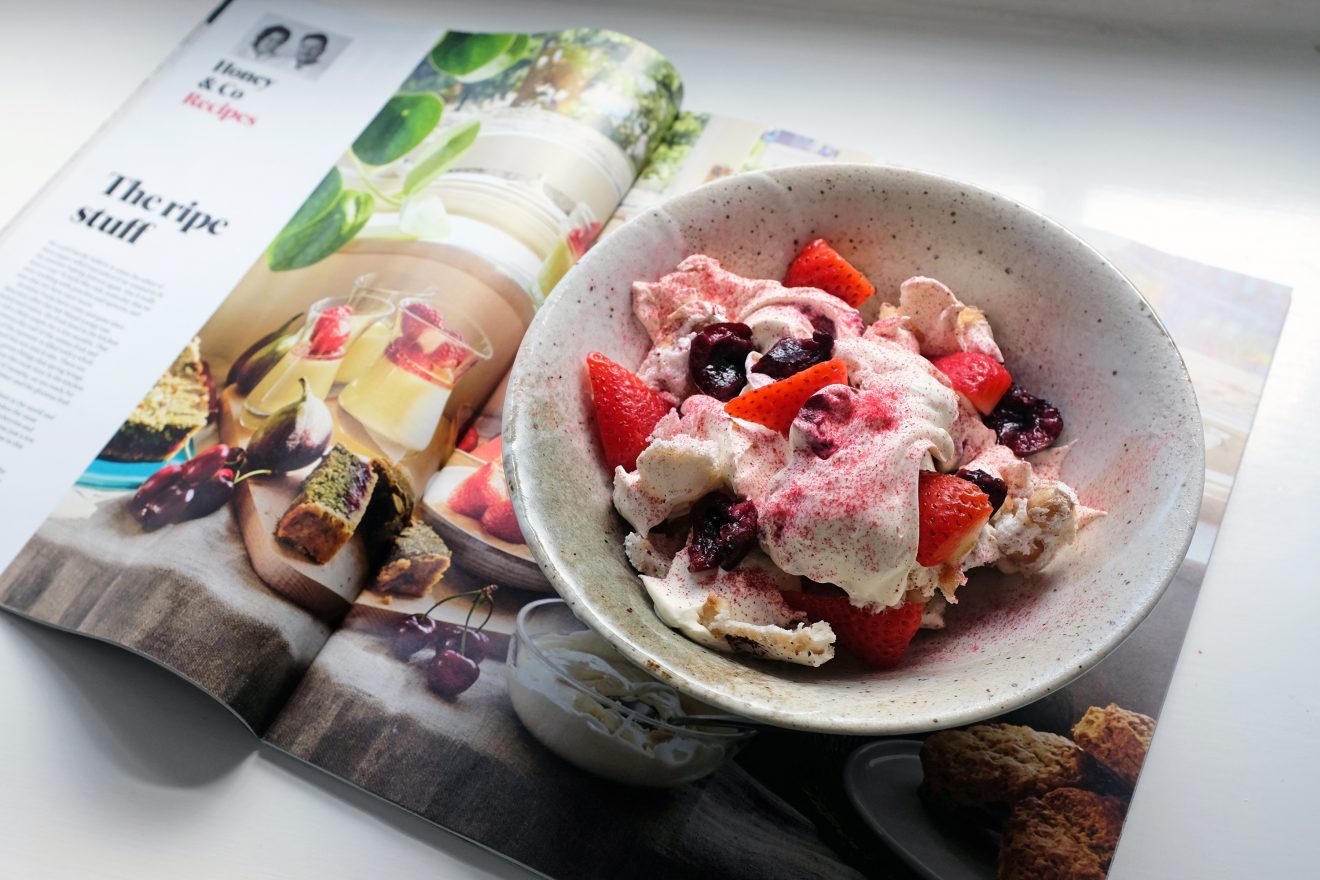 You must be tired of reading about politics by now. Here are the recipes from the weekend supplements.

Salads seemed to be the order of the day(s):

And I suppose Rachel Roddy’s simple antipasti might qualify as ‘salads’ in some eyes, too. Courgette ribbons marinated in lemon and tossed with basil, borlotti and rocket, and grilled aubergines.

I Loved Nigel’s chicken salads for the Observer, particularly the roast chicken, pea shot, fregola and cherry assembly, which was dressed with a sharp pomegranate, red wine vinegar AND lemon juice dressing.

Rowley Leigh  gave the FT Weekend Magazine crowd salads as well, albeit somewhat begrudgingly. Writing about a local competitor to his former restaurant, he noted “a ‘seasonal salad’ was perennially popular’. I didn’t get it“, and “the idea of a ‘main course’ salad is itself a little odd: I have no wish to chomp though acres of herbage in the name of nutrition, wellbeing or renunciation“. Still, three suggestions followed. I thought hispi cabbage, turnip, smoked mozzarella and mortadella sounded very good indeed. NB there are capers in the photo for this, but not the recipe. Add them.

Staying with the FT and salad ingredients, Bee Wilson’s piece on [not accepting] flavourless cucumbers is worth reading.

In fact, the FT also treated us to multiple baking recipes from the Honey & Co duo. Their summer sweets were the star a seasonal foodie issue, and I commend to you the kinda-baked-cheesecake pots served with ginger roasted strawberries, plus a strawberry and pomegranate granita. See also: the cherry pistachio Bakewell; fig and cardamom scones; and lemon and saffron posset. Lovely stuff.

Flora Shedden came at us with galettes. Her Telegraph column included an apple and cinnamon free form tart, though also (and perhaps more notably) a savoury pea, cambazola and sage spelt galette too.

Did you get to last week’s #Supplemental early enough to click on Thomasina Miers’ no churn lemon meringue parfait with warm strawberry sauce? The rogue post was technically this weekend’s recipe, and is worth checking out. Also the veal meatballs and spaghetti that go before it.

In this week’s Sunday Telegraph ‘Stella’ mag Diana Henry admitted to sometimes just not being bothered to cook. Which was a relief to read. She wrote that one ‘cheat’ for such occasions is to use pre-cooked grains and pulses — you just need to add a little bit of mostly raw ingredients to those things to stumble upon a very satisfying supper. Mixed grains got the hot-smoked salmon treatment, plus a neat little mix of creme fraiche and preserved lemons; beluga lentils took on tomatoes, ricotta, white balsamic and Parmesan; and rice noodles took on a South-East Asian peanut dressing, loads of fresh herbs, raw veg and leftover chicken.

Stephen Harris has a cookbook coming out in the Autumn. My guess is The Sportsman will be as seminal for many as Leaves from the Walnut Tree was for him. That said, I’m not convinced the simple sea trout and cherry tomato recipe he provided this week is of great note, other than it was inspired by the restaurant and book he mentions. But all part of his story, I suppose.

Speaking of cookbooks and restaurants with a history, The Ivy has a new cookbook covering the last twenty five years, and this was given a push by The Sunday Times. Crab macaroni cheese with lemon zest brioche crumbs is the pick of the recipes reproduced.

In Saturday’s Times Magazine: quick pasta dishes care of Laura Santtini (the lemon and caper one); more pasta from Donna Hay (maybe the kale, dill and crisp skinned  salmon one?); and not pasta but a choux puff filled with vanilla cream, courtesy of Nadiya Hussain.

And to finish, I’m very keen on Yotam’s duck with rhubarb jam and pickled cucumber. Also his rhubarb, fennel and sumac ‘kimchi’.

If you can get hold of broccoli raab/rapini, David Tanis’ raab and ricotta lasagna in the New York Times looks good.

*Sod it, it feels like a two pudding weekend*