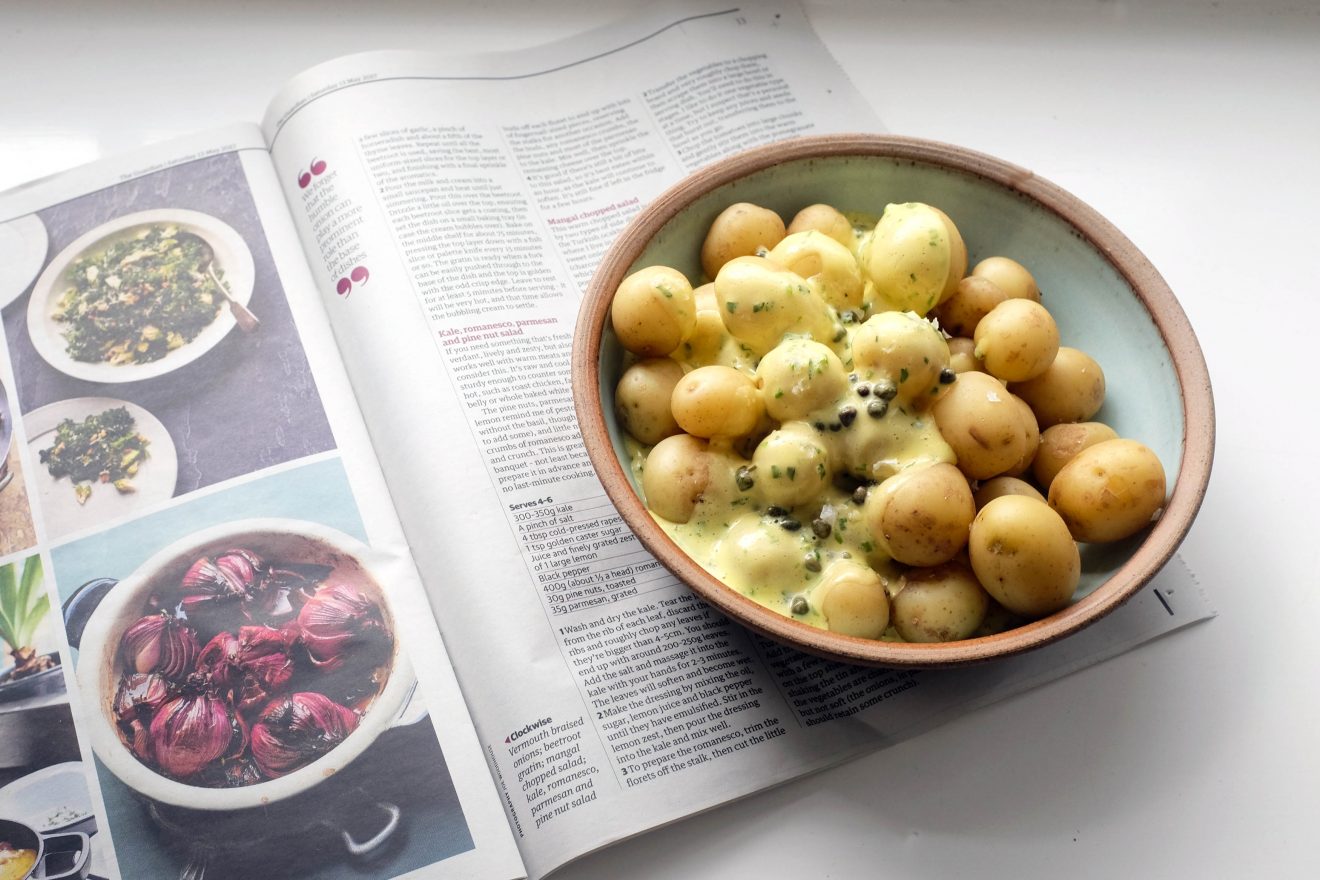 Just a straightforward, plain vanilla, paper-by-paper run down of the recipes this week.

On Saturday Yotam put in a good word for trout in the Graun’s Weekend magazine. His recipes included bruschetta topped with a mix of smoked trout, horseradish, soured cream and chervil, and then a poached egg yolk. Racy.

And I was keen on Tommi Miers’ spiced lamb chops with broad bean mash and zhoug in the same supplement.

Cook was a cracker. Anna Jones provided multiple dressings for the humble new potato, including a kind of tartare sauce that dressed my lunch spuds on Sunday.

Rachel Roddy continued her paean to peas with a braised veal shank and pea number (so good).

And Jeremy Lee followed that with a warning that our want for walnuts has wained, but does his very best to reverse that with a recipe for walnut cake and chocolate sauce — only a few ingredients, with whipped egg whites as the raising agent. I’ll stop with the alliteration now.

Nigel Slater went with baked fish as the theme for his Observer column. Ordinarily I’m a sucker for bream baked with Chinese aromatics — Shaoxing wine, ginger etc — but I was particularly drawn to his sea bass baked on a bed of tomatoes, anchovies, capers and green peppercorns.

After three and half years of compiling this weekly digest, I can confirm your suspicions that recipes and themes get recycled and repeated. But that’s not always a bad thing, and there are some dishes that I never tire of seeing — pissaladière, for example. This was covered by Gizzi Erskine in 2014, Dimbleby and Baxter in 2015, and Tessa Kiros in 2016 (and surely Rowley Leigh at some point too?), yet I wasn’t miffed at all to see Stephen Harris opine on it in Saturday’s Telegraph. Like Kiros he makes a yeasted bread base (rather than roll out a layer of puff pastry) and his ingredients state ‘marinated anchovy fillets’, though surely he means salted and in oil, rather than the boquerones this brings to mind?

Diana Henry proposed a few lunch box ideas. I’m totally on board with her suggestion that people mash tinned sardines and chilli and transport that to work with a few slices of bread, butter, radishes and a boiled egg for assembly on the spot. Also the soy noodles with ginger, cucumber and prawns.

The FT Weekend Magazine ran a handful of food pieces this month, so there were a couple of recipes and a number of other good reads.

Marcus Samuelsson’s Sunday eggs look full of flavour (chorizo meat unpicked from its casing, chipotle, olive, passata, horseradish, baked eggs and burrata). Quite like the idea of the live Harlem-style gospel soundtrack to brunch, which is apparently coming to his new Curtain Hotel site along with the eggs.

For something less in your grill, Rowley Leigh’s plaice and cherry tomatoes ought to do the trick. The step beyond the ordinary here is that Rowley adds prawn shell stock, white wine, chilli flakes and marjoram in the last minute of the cooking process.

Blimey. Lots of new curry books out at the moment, including The Curry Guy‘s versions of the British curry house take away (still can’t decide how I feel about this), and a new one from Atul Kochhar, on ‘curry in a hurry’. The Sunday Times had three recipes from the latter, which are all doable in under 30 minutes — spiced red kidney beans, Keralan meat pepper fry, and calcutta chicken curry. Have a look, but to my mind if you’re looking for a quick, easy and enlightened take on spice, your money’s best spent on Meera Sodha’s Fresh India.

A day earlier The Times Magazine had some mediterranean recipes. Plus Nadia’s twist on a Sticky Toffee Pudding is to use both dates and prunes, and to pour the sauce over fifteen minutes before people get to eat it. Tepid and soggy or a good idea? You decide.

And the Weekend section had a handful of citrus themed puddings by Ursula Ferrigno, best of which was a lemon, raspberry and cardamom torte. Plus an interview with Gordon Ramsey’s daughter about her cookbook and her fish pie … and I’ve re-written and deleted this closing sentence five times so will leave it here now.

There’s a Sam Sifton recipe for roasted grapefruit on the New York Times website. Kind of intriguing. It’s not really roasted, more a halved grapefruit turned over onto a pan of caramel then flipped back over and sprinkled with mint. Still, might try it.

And this rescue tip for formerly soft but now rock hard brown is useful.

On the Side Watch

Snippets from On the Side appeared in MR Porter earlier in the week in a piece on the 3 side dishes every man should master (same applies for woman and child too, by my reckoning).

And I was stoked to see a lovely spread of recipes in the Guardian Cook supplement, too: vermouth braised red onions; kale and romanesco salad; Mangal chopped salad; creamed chard; and beetroot and horseradish gratin.

Have a read of both. Then come back and click through to Amazon, yeah?

One thought on “Supplemental #154”