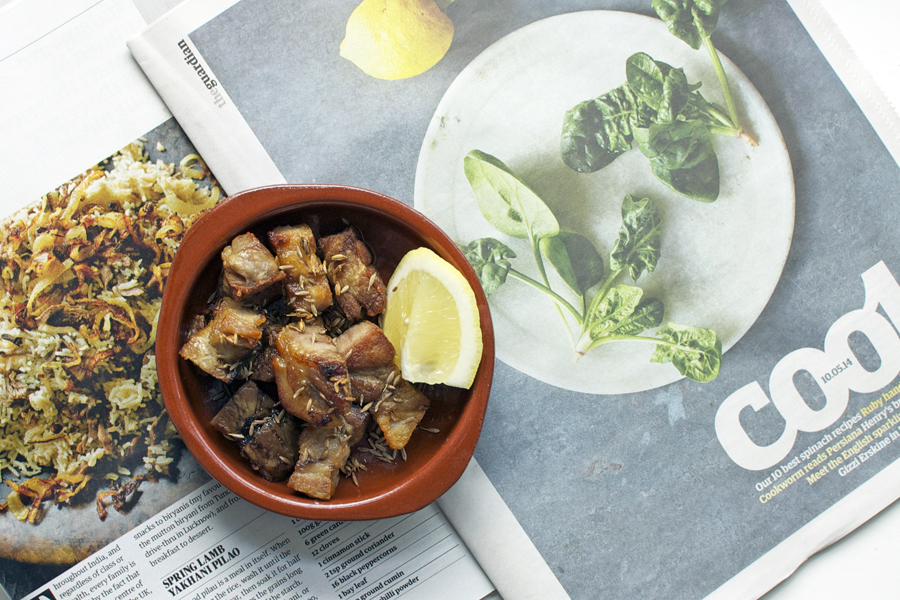 I’ve just finished swiping through the Sunday Times Magazine’s ‘Super Rich List’ issue. After the initial disappointment of finding that I am not one of Britain’s richest billionaires, I felt an overwhelming sense of nausea. In fact the only non-vom inducing part of that supplement was the food section. Read on for that and more from the other perfectly palatable food pages this last weekend.

Gizzi Erskine’s ST column focused on the cooking at Simon Rogan’s restaurant, Fera; the (happily fairly tenuous) link to obscene wealth being that this is the flash new restaurant at Claridges hotel. Gizzi’s three adapted recipes will be of interest to adventurous cooks (not a market often catered for). Beetroot smoked in an oven ready bag with self prepared, fresh curds; plaice cooked in tea infused oil served with brined sweetheart cabbage; salt backed kohlrabi. “Simple transformed into outstanding”. All very achievable at home.

I never quite know where Rose Prince’s recipes fit in the Telegraph. She usually has a little column in the Saturday paper, but on their tinterweb page this weekend there was a more lengthy than usual set of sea vegetable suggestions. It’s possible they were from a Friday feature, but I quite liked them so thought should link here anyway. Crab club sandwich with dulse may; sweetbreads with peas and sea lettuce stood out.

Speaking of peas, Yotam’s Guardian column was all about the little green chaps. Nothing new (or wrong) about a pea and feta salad with lamb chops. But peas with sorrel and mustard looked like an interesting side. A pea and wasabi purée and radish tart seemed a touch bonkers, though I can imagine how it works. Fiery.

Karam Sethi’s guest section in the same magazine was stellar again. He proposed three rice based dishes: lamb yakhani pilao; soft shell crab bhel puri; mango kheer. I’m collating all his recipes over the three week slot for a big day of cooking, and an evening of dining, at some point in the near future.

Cook included some good ideas for spinach among this week’s ‘ten best [x] recipes’. The Asian inspired ones stood out for me (Gomae; coconut spinach with fried eggs; Sindi spinach and lentil curry). I also thought Ruby Tandoh’s chilli and fennel seed pork pie could be a fun weekend project.

Hixy knocked up some raw things. How does scallop and tequila ceviche grab you? I’m not totally convinced either … but did really like duck tartare, laced with chilli, soy, apple and coriander, and served with a prawn cracker.

Some weekends there are barely any puds, others we can’t move for brownies, meringues and tarts. 10 and 11 May was unusually well balanced.

Among the sugary offerings, I rather fancied Stevie Parle’s rhubarb and crème fraiche galette. A day later, Diana Henry’s goat’s curd with baked apricot and honeyed almonds was, I think, my favourite of her things to do with goat’s cheese in The Sunday Telegraph.

In the FT, Rowley made the case for a grown-up rosé jelly with rose petals, rhubarb and gariguette strawberries.

As with the Rose Prince recipes, I was fairly sure that a video and a couple of recipes on the Guardian’s website, which promoted Sam and Sam Clark’s new cook book, were not related to Saturday’s pages. But their Morito chicharrones recipe was the first thing I saw on Saturday morning and kept coming back to haunt me. I also had some already cook pork in the fridge that would benefit from a second fry, generous squeeze of lemon and loads of cumin seeds. Sure did the job.

Had I not done this, I would’ve used the same pork in Nigel Slater’s asparagus, pork and rocket dish. Interesting that he reckons we should cook asparagus until it’s floppy. 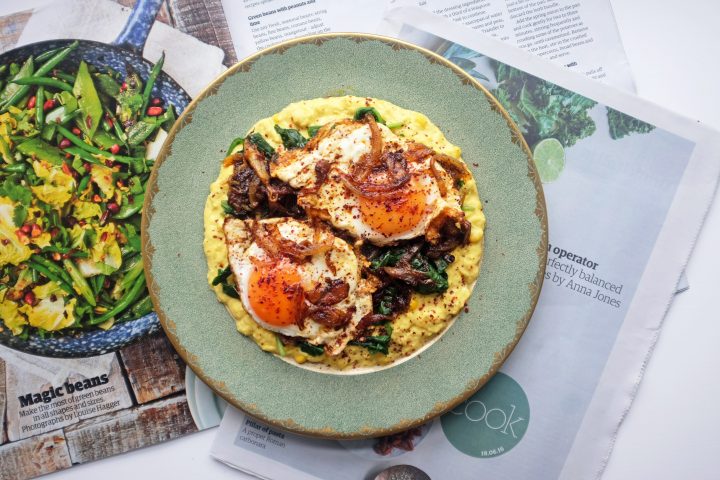 One thought on “Supplemental #15”