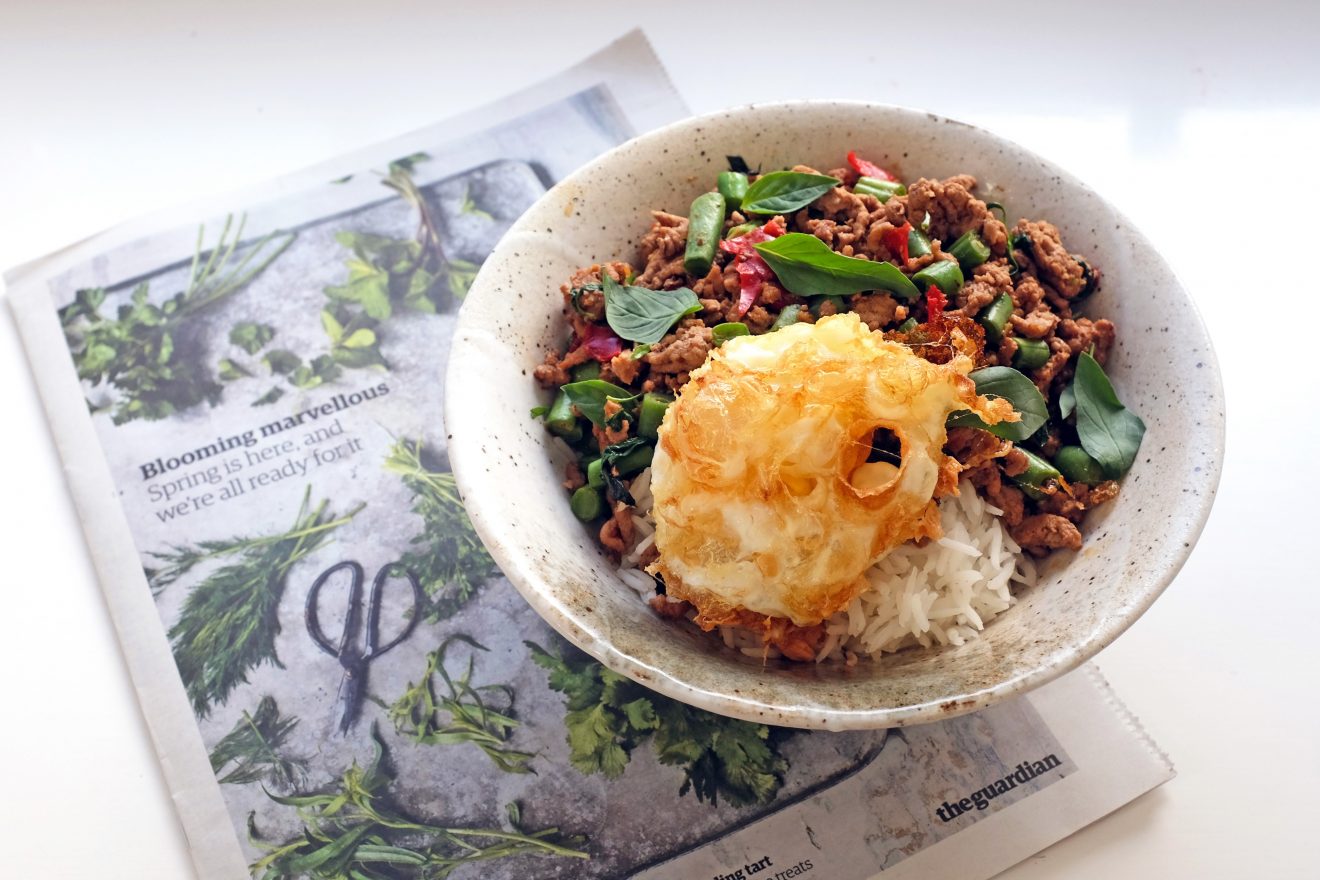 Let’s do this on a paper by paper basis this week.

I’m aware I’m generally pretty positive about Cook, but it really was an excellent read (and resource) on Saturday, each turn of the page revealing yet another appealing recipe or evocative turn of phrase.

Both of Anna Jones’ herbal recipes look likely to be refreshing and enlivening eats: spring herbs and yoghurt soup for your midweek supper; sorrel, roasted radish and crispy lentil salad when you have friends over on Sunday. (Link to follow when it goes online this afternoon).

Jessica Seaton of Toast lifestyle brand fame has a recipe book out, called Gather Cook Feast. All based on the right seasonal eating principles, with a little bit of contemporary cooking, and a touch of the classic. In the Cook supplement, we caught glimpses of the style, including a buttery bake of sliced new potatoes alternating with slices of lemon. Plus ‘curate’s pudding’ made from cold mashed potato, eggs, lemon and sugar (inspired by Mrs Beeton). Mashed potato for pudding … do let us know if you have a go.

Lord Jeremy Lee was in there too, thanks to a column titled ‘king of puddings’ (he really is). His recipe based on Alistair Little classic tart of apples, prunes and sabayon custard will be a real treat.

And Kay Plunkett-Hogge’s ‘taste of home’ caught the eye. In part because, well, Thai-ish minced pork. But mostly because her pad krapow moo has OMGWTF deep fried eggs on top FTW.

In the main magazine Tommy Miers went global and suggested we try Sri Lankan style cauliflower curry. Also miso and soy salmon with sticky sushi rice and baked (and therefore crispy) coconut oil glossed kale. Nice. A page or two earlier, there were some pretty unconventional pasta salad combos by Yotam Ottolenghi, not least cold squid ink spaghetti, with pickled rhubarb, peanuts and tarragon. If the spaghetti had been labelled ‘noodles’, no one would question the combo.

Remain unconvinced by pasta and pickled rhubarb? Then turn to Sunday’s Observer, where there’s absolutely no doubting Nigel Slater’s meatballs: braised pork meatballs with a baby back rib and mushroom sauce; lamb and sumac with a creme fraiche, turmeric, coriander and broccoli sauce. Winners of this week’s ‘Lush’ award.

A Honey & Co weekend again in the FT Weekend Magazine, which is always a good thing. Readers would’ve noted their tahini sponge cake (drool), decorated with vanilla cream (great) and white chocolate (arghghghghghgh — like truffle oil and rosewater, the product of Satan’s larder).

On Saturday, Donna Hay was cooking quickly again. A mushroom and chorizo rye bread and butter pudding looked promising. Chard with giant couscous ‘risotto’ too. Also in the glossy magazine, Nadiya Hussain went with a rhubarb and almond trifle. Nothing you’ve not seen before, but a good combo nonetheless.

There were a handful of Middle Eastern recipes from Emma Spitzer (a Masterchef bod) in the Weekend section — taken from her forthcoming book. A spicy Algerian potato cake (makhuda) looked interesting — essentially a frittata/Spanish omelette with harissa run through it. Also an artichoke and pistachio gratin. Your kind of food? Fress: bold fresh flavours from a Jewish kitchen is out this week.

It was a ‘The Dish‘ weekend, so amongst a variety of food related columns, Sunday Times readers saw multiple recipes from Jamie Oliver (on eating 10 portions of fruit and veg a day) and Florence Knight (on Easter).

Of Mr O’s recipes, I imagine a Brazilian-style black bean stew (feijoada) would go down particularly well. A minestrone including a dollop of pesto was particularly Jamie’d — quite like the idea of stirring in radicchio at the last minute, though good luck finding courgette flowers atm.

Florence’s ideas for the Easter table were light and fragrant (and more seasonal than the legs of lamb that’ll no doubt be pushed over the next few weekends). Her roast chicken — with a soft herb stuffing and a good glug of riesling in the cooking liquor — should be a treat. And by the time the holiday weekend comes around, the asparagus and Jersey Royal salad on the side will be  perfect. Rhubarb clafoutis is a nice twist on the cherry version; but you’ll probably need to cope with the unforced ‘barb when you get to making it — so don’t be disappointed if you were only ever after the bright pink aesthetic.

On Saturday I enjoyed reading about Stephen Harris’ ‘grand-cru’ vinegar, as he pointed out that anyone can do the same with the dregs of their wine at home; just perhaps not with the same vintage as is leftover at his restaurant. A simple assembly of vinegar dressed purple sprouting broccoli, duck eggs and ham followed.

And keeping with the leftover / dregs theme, Diana Henry suggested a few ways to use those pesky last spoonfuls in the creme fraiche tub: as a sauce for baked salmon; mixed through eggs smashed onto toast; and (most invitingly) dolloped onto baked apples — which have also been sprinkled with crushed ginger biscuits and then given a brulée style caramel top.

Have a read of Katy Salter’s rundown of 21 ingredients to refill your larder with (and rarely use) once you’ve spring cleaned the current detritus. The recipe in there for lemon polenta cake flavoured with seaweed, though? Boak.

Finally, at some point over the weekend The Telegraph’s pages housed a good looking set of seasonal recipes by Rose Prince, though I’ve not yet seen it online.

Here’s one for the vegans: Fuchsia Dunlop’s chicken blood and intestine soup over at Lucky Peach. “You will need to collect the fresh blood, which means slitting the bird’s throat.” Which of course also means that chicken needs to have been running around moments before.

Also within the same feature: ‘Fly-Squark-Jump’, a recipe for the head, feet and wings, which begins “trim the toenails from the feet“. YUM.

Kay Plunkett Hodge’s pad krapow moo called to me. The seasoning of the pork mince was ace — a good blend of soy, fish sauce, sugar, plus red chilli and ginger paste — and was ultimately elevated by adding generous handfuls (as suggested) of aromatic Thai basil. Is there room for a hint of sour lime or lemon there too?

Let’s be honest, though, it was the image of a deep fried egg that sucked me in. The instructions for which were “when the oil is super hot …”. I waited until the oil reached 170C, but I think “super hot” might actually mean about 180C — when I reckon the inner yolk might just still be ooozy after 45-60 seconds (as mine was), and the white a touch crispier than you see in the picture above.

I’ll definitely make the pork again, probably just aggressively wok frying the eggs next time. Deep frying was fun, but a bit of a faff.

Lamb meatballs with sumac and broccoli