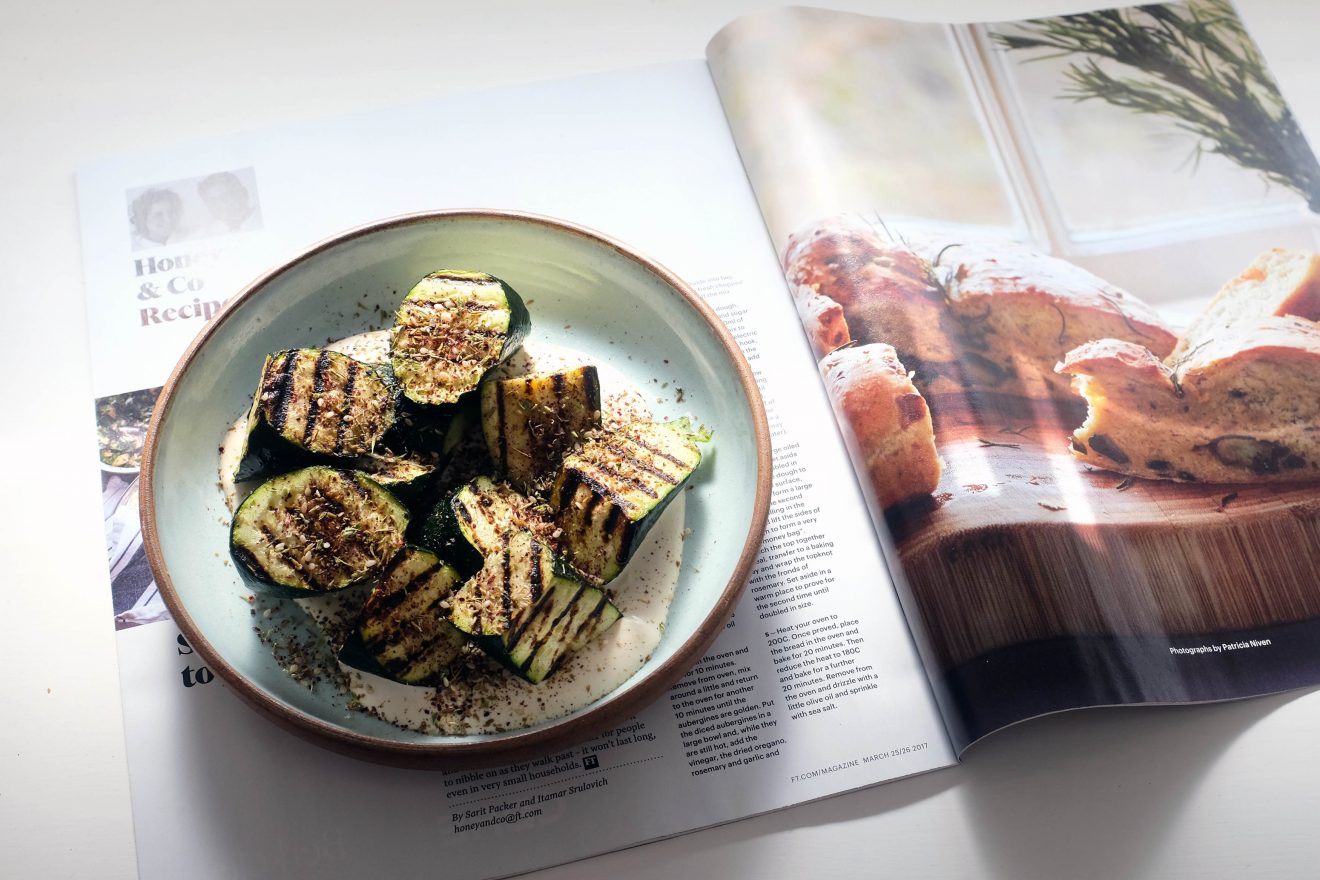 Plenty of tempting things in this weekend’s recipe selection — with multiple baked goods, molten croquettes, and a little bit of Britalian for good measure.

There’s a pocket of shining, gooey chocolate in one of the slices of Jordan Bourke’s babka for Cook, which is calling me to get baking.

If that’s got you in the mood too, then have a look at Itamar Srulovich and Sarit Packer’s aubergine-filled yoghurt bread in the FT Weekend Magazine.

Pretty hard to resist croquettes when they’re on the menu, isn’t it? I wonder whether that’s partly because bread-crumbing and deep-frying gooey things is one step too far at home? Yotam suggests otherwise, with Dutch Garnalenkroketten — or prawn croquettes — which magically have the same number of ingredients as they do vowels and consonants … There are marginally fewer things to gather for the verdant spinach, pea and pancetta option.

And who would say no to praline? OK, maybe denture wearers. Still, Nigel will have pleased Observer readers by noting how easy it is to make the caramel-nut crunch at home. He suggests sprinkling over steamed chocolate pudding or chocolate and coffee mousse.

And, hell, nobody rejects the gift of a 20 recipe Nigella OFM special. Which is something that came with Sunday’s Observer. I’ll link to as they release it online during the week.

Stephen Harris told Telegraph readers that the secret to great meatballs is to cook them as quickly as possible. True your balls shouldn’t bubble away for too long otherwise they’ll seize up. But I reckon the best, and lightest, versions include ricotta in the meat mix too.

The Guardian Cook supplement hosted not one but two chilled lemon puddings from Rachel Roddy this weekend. I’m more drawn to the English set cream posset than the Sicilian egg and cornflour thickened option. But maybe I should be more European about things whilst we still can.

In fact, viva l’Italia! I’m massively drawn to Thomasina Miers’ suggestion that we make fresh maltagliati for supper this week — and serve it with purple sprouting and walnut pesto.

I’d love to read what Shaun Hill, chef and author of the excellent and also very blunt Salt is Essential would have to say about that. As it happens, Saturday’s Times Magazine included an extract from his book, possibly all from the chapter entitled “soya beans are best left for cattle feed”… Twice baked Lancashire cheese soufflés, Lobster omelette Victoria, and Jansson’s temptation caught my eye.

Mums and, uhm, things that are yellow (not related)

Nadiya Hussain offered Times readers vanilla cake covered with condensed, evaporated and whole milk (whipped up like double cream) and passion fruit. And there were various recipe bits and bobs in the Weekend section too, but I’ll save you the bother of being rebuffed by the paywall if for them if you haven’t already browsed.

Diana Henry contributed a timely piece to Saturday’s Telegraph on the practice of saving handwritten recipes — perhaps inevitably ascribed to mothers and grandmothers — and included hand-me-down recipes such as chicken and watercress casserole, cinnamon buns and lemon cake. I’d wager we could all find a lemon drizzle recipe in our Mum’s recipe scrapbook (and that my Mum’s is best).

On Sunday, Diana’s regular column centred on turmeric. The recipes included a turmeric tea (NOT a ‘trendy’ latte), a sweetened porridge, and most appealingly (I thought), turmeric and lemongrass grilled chicken with a quick vegetable pickle.

Also in The Sunday Telegraph Flora Shedden laid down a couple of breakfast recipes (eggy bread; granola) for Mothering Sunday, which you’ll have to remember to use in eleven months and fifteen days time. In the meantime, Ma, it’s gruel and no complaining.

I also like the look of David Tanis’ monkfish roasted with rosemary, thyme, lemon and olives.

Given we’re in the States, why not take a look at Mario Batali’s merguez and mint ravioli (via Lucky Peach)?

As an aside, it’s a year since the last editions of Independent and Independent on Sunday. Gotta say I miss the extra variety their food pages provided.

Turmeric and lemongrass grilled chicken with a quick vegetable pickle.