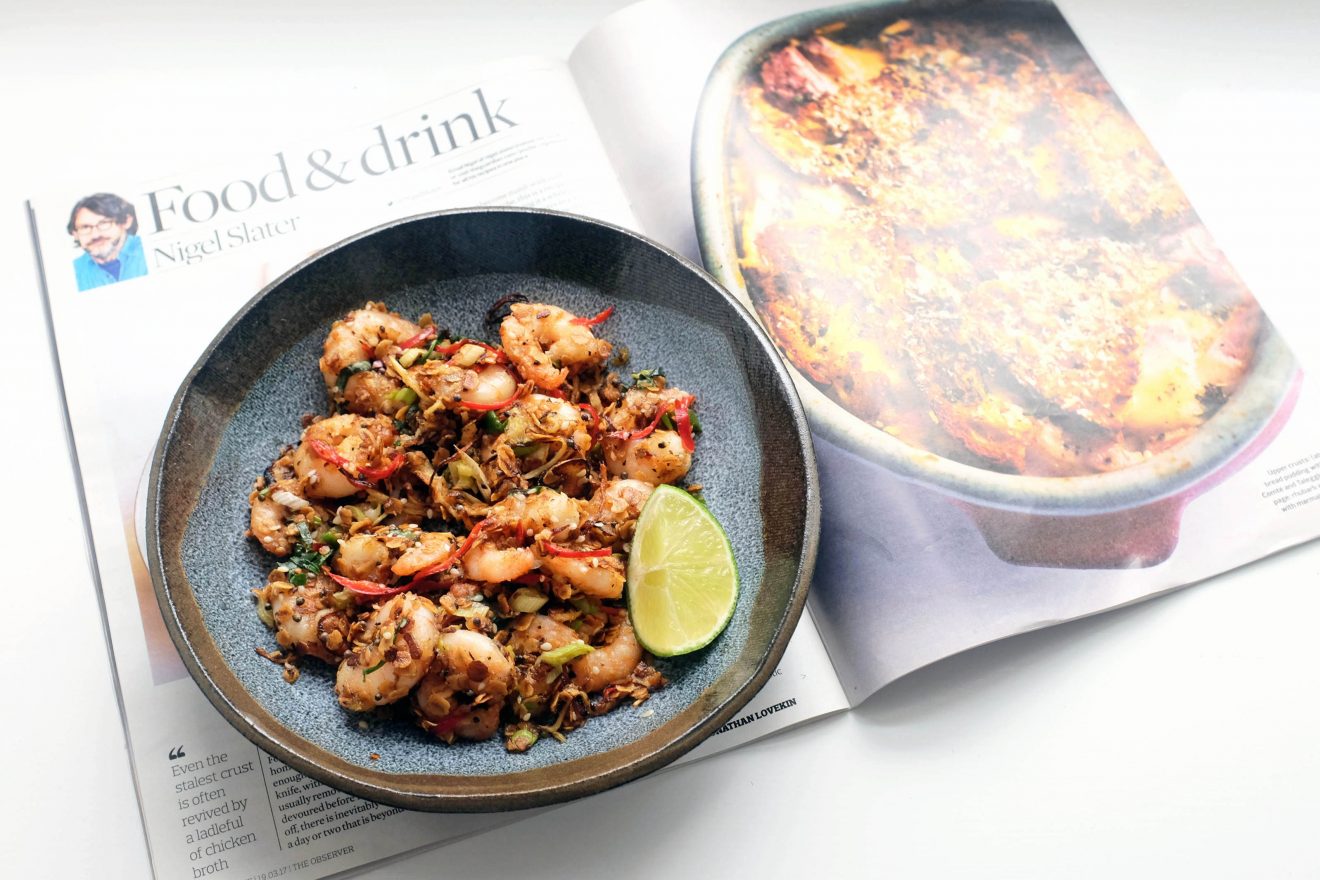 I’ve ordered the recipes by publication for this Supplemental. No particular reason. Eyes out for curry leaves and meatballs.

The people of York Way had the biggest output this weekend — by some distance.

On Saturday we got curry leaf recipes from Yotam Ottolenghi. I particularly enjoyed the addition of their musty edge to a normally plain dish — a curry and kaffir lime leaf, spiced root vegetable gratin. Mulligatawny soup and sorta-Singaporian style crisp prawns with curry leaves and oats looked great too.

The glossy mag also provided satisfaction in the form of a sticky ancho and rosemary chicken traybake, and lemon drizzle cake topped with candied citrus peel, both courtesy of Thomasina Miers.

Anna Hansen’s kinda-roast-kinda-braised whole chicken in Cook tempts: it’s first rubbed with garam masala and amchur powder and roasted for 30 minutes, then sloshed with saffron infused wine, before chorizo and tomatoes are added and it’s shoved back in the oven. Loads of flavour there, if no particular geotag. Preserved lemon yoghurt and cavolo nero complete the heady mix of flavours, ingredients and influences.

Cook readers will have noticed the content of that supplement is morphing a little — there are fewer Residencies, for example. Rachel Roddy is still there, though. This week the recipe was a simple dish of spaghetti tossed through with anchovy, lemon and breadcrumb. As always, the devil (well, joy) is in the detail of instruction, and the sentiment and story in her intro. I think there was an Anna Jones column too, but will have to link when that’s online.

Also in that supplement: three homemade bread recipes from Jordan Bourke’s book Healthy Baking (he of the outrageously good, and outrageously cheap atm (£4.99) Our Korean Kitchen). The spelt and poppy seed pitta looks like one to try.

It was an Observer Food Monthly Sunday. The magazine contained lovely, personal interviews with cheffing Mums, and online they each offered a recipe too — Margot Henderson’s ginger biscuits; Olia Hercules’ spatchcock garlic chicken with turnips and swede; Helene Darroze’s any fruit crumble; a brilliant sounding mutton ‘masaledaar gosht’ by Romy Gill; and Shuko Oda’s sea bream rice with soy cured egg yolk. There wasn’t much else to report recipe wise. Aside, I suppose, from a handful of vegetarian recipes by Swedish food blog, Green Kitchen Stories.

In the main mag, Nigel provided food hugs in the shape of a savoury (ham and melty cheese) bread and butter pudding. Plus cool rhubarb to go with marmalade toast soldiers.

Good curried parsnip and vanilla soup with parsnip crisps by Stephen Harris. I was surprised to read he’s not always a fan of this ace root.

There were also some good tips on not wasting food within an article by Sue Quinn. In particular: freeze fish bone until you have enough to make soup; ferment vegetable trimmings; roll cooked veg leftovers into a dough and make a tear and share bread.

I quite liked the look of Flora Shedden’s upside-down banana caramel cake.

And that was about it for online readers, even those of us paying for the privilege (I’m sure there was more content in the papers, so *cough* mildly irritating that none of it was up).

The Sunday Times Magazine housed dishes from recipe box company and now book Mindful Chef. The recipes raised questions such as: are you sure kohlrabi makes a good ‘chip’ to go with pink peppercorn steak? Is a mix of quinoa, artichokes hearts and olives topped with baked chicken thighs really a ‘paella’? And are you one hundred per cent certain the coconut oil used to sauté leeks to go with sweetcorn and smoked paprika fritters works well with the flavours of roast asparagus and cherry tomato, or did you just throw in a fad ingredient?

Saturday readers got Nadiya’s banana loaf topped with crushed banana chips (cute idea); lots of good, quick supper ideas from Donna Hay (always in such a rush); four chicken stock based soups; and some ‘Weekend Feasts’ penned by Lisa Faulkner — the crisp, fried rice patties made form sushi rice to go with teriyaki salmon is a cool idea. Also a quiche base made from Ritz crackers, butter and gruyere.

And online readers of the latter piece will also have seen a five dinner party recipes from last week’s Weekend section, taken from Thomasina’s Home Cook. Which is excellent (as those five recipes show).

The FT Weekend Magazine has had a little makeover. Happily there wasn’t much messing with the already good food pages, ensuring Honey & Co’s lamb, beef, fenugreek, coriander, turmeric and green herb meatballs looked as gorgeous as that sounds. Not least thanks to the melange of courgette, broad beans and leeks they come with.

The big cookery writing news of last week was that Lucky Peach is shutting down — just one more print issue and seemingly an end to digital footprint by the close of May. A New York Times feature suggests this was largely due to the egos of the three founders, rather than an unsustainable business model (though it’s probably a bit of both). Either way, head to the website and gorge before it’s gone. They’ve added a typically black humoured “recipes to make because your company is closing” feature (cheesey, miso, mayo sweetcorn gets a thumbs up).

The food I most wanted to cook was pretty much all within Yotam’s curry leaf offering. So I trotted off to get some prawns, and then to my favourite, always dependable greengrocers. Who told me they’d sold out of curry leaves; they’d have more tomorrow. Seems like the whole of North London was on my wavelength.

Still, I can report that prawns, oats and loads of aromatics makes a wildly more-ish afternoon snack — even if the main reason for cooking them was missing.

And for dessert? Dunno, maybe some cheese.