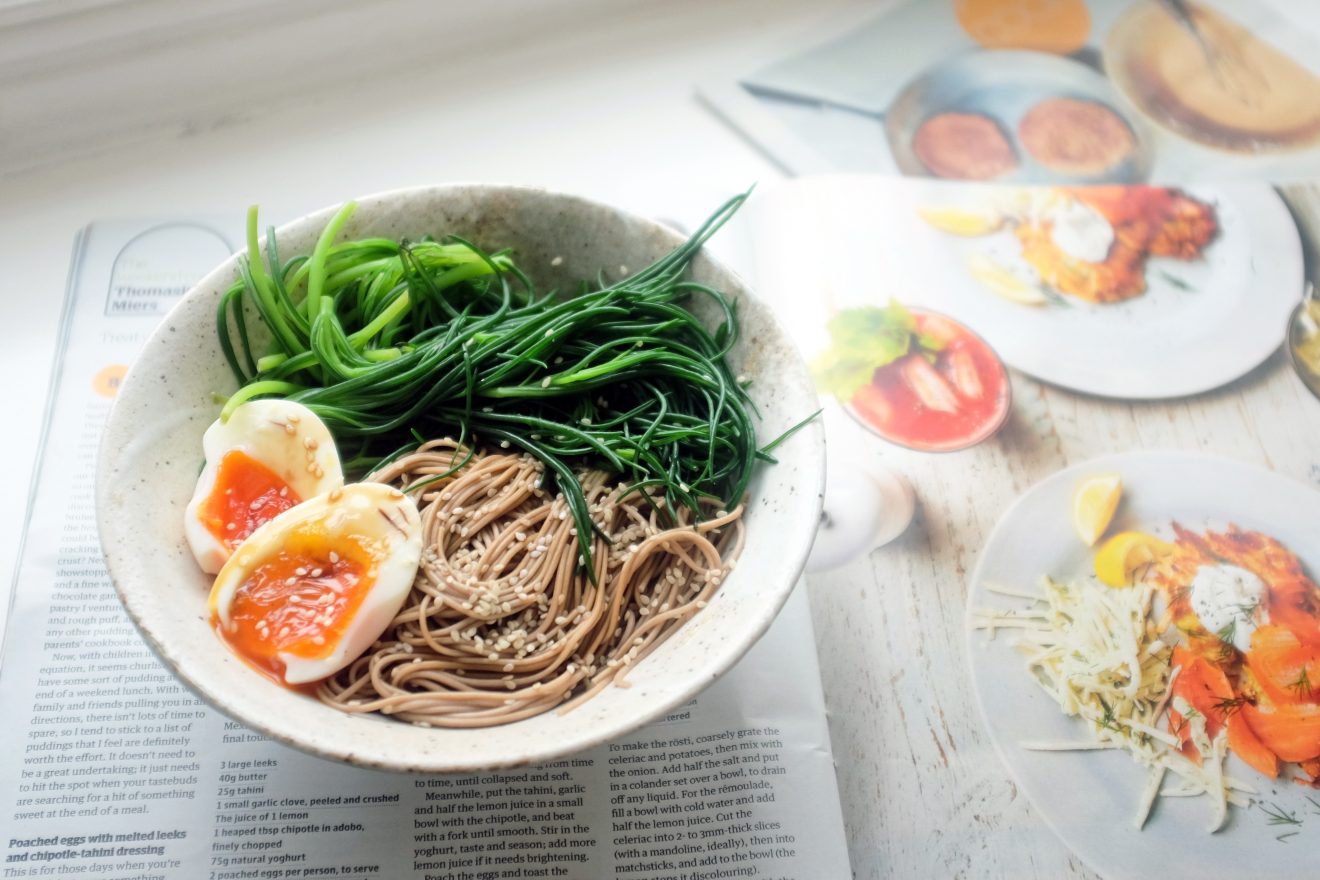 There were a host of toppings for basic pancakes in The Times Weekend too, including plums and orange mascarpone; ham, egg, gruyere and rocket; berries and chocolate sauce.

Also in Saturday’s Times (though in the magazine) Nadiya Hussain recounted how, in her house, there’s always a fight on Shrove Tuesday as to whether it should be thin crepe type pancakes, of fluffy American ones. She sides with the latter. Which of course means she’s wrong. Served with an apple and blueberry sauce, though, if you’re interested.

Flora Shedden went with Scotch pancakes (reminds my of my grandmother) and rhubarb compote; and also ricotta pancakes with whipped maple syrup and cinnamon butter, and caramelised apples (reminds me I need to go for a run). A black mark for recommending Braeburns for the latter.

Pancakes could be found in the FT Weekend Magazine as well, though technically it wasn’t suggested that these should be consumed tomorrow. Merlin Labron-Johnson (chef-overlord at the excellent Portland and Clipstone restaurants) prescribed a couple of ‘brunch’ recipes, including a buckwheat galettes with duck egg, chanterelles and pecorino. Also an intriguing buttermilk scone and venison gravy involving minced venison, sausage meat, espresso and maple syrup.

In the Guardian’s Cook, Anna Jones noted that pancakes are a year round thing, and offered both a fluffy option (involving mashed banana — nice touch) with a variety of topping ideas; and a savoury rye pancake filled with spuds and capers.

But anyway, suffice to say you should ignore all of the above ideas. The only thing way to roll on Jiff lemon day is with basic pancakes topped with caster sugar and citrus.

After seeing Claire Ptak’s column in Cook I’m off to get some grapefruits and I’mmma gonna get sticky with them. Not least because of her chocolate mendiants recipe (topped by the grapefruit and crystallised ginger) caught my eye, and so require a candying session.

Corrrr, check out the chicken thighs from Nigel in the Observer — oyster sauce, honey, light soy, chilli sauce — cut with pink grapefruit and cashews emboldened by fish sauce, lime and fresh herbs. And, ye Gods, an apricot and cranberry sponge topped with a cranberry butterscotch sauce.

Like Merlin, Thomasina Miers wants to help us up our brunch game. So the second extract from her book Home Cook involved things like celeriac rosti with smoked salmon and celeriac remoulade, and leeks, poached eggs and chipotle-tahini dressing. Also chocolate cake.

On nearby pages, Yotam Ottolenghi set out some vibrant and crunchy grated vegetable salads and slaws, many with a fruity twist: beetroot, plum and Dolcelatte; root veg with mango and curried yoghurt; radish, daikon and green papaya.

There was a fist full of mighty tempting curries by Anjum Anand in The Times Magazine, including chicken with fenugreek leaves, Amritsari chana masala, and a cumin, mustard and fenugreek seed laced fish curry.

At this time of year you’re better off slow cooking rather than fast roasting a leg of lamb, according to Stephen Harris in The Telegraph. And to him, that means dicing the meat, braising it, then shoving it in the middle of a suet pudding. One of those over here, please.

Somewhere in The Telegraph’s pages this weekend, and very definitely online, were a few recipes from Richard Turner’s latest tome (the very bovine Prime: the beef cookbook) including lightly cured fillet steak and a fairly classic steak tartare.

Was there a French recipe OFM pull out too? I’ll add links if things go online.

Lizzie Mabbott’s duck Ssam looks banging. As does a baby shallot gratin over on Munchies.

And just in case you’ve run out of brown sugar, but do have molasses and white sugar, here’s Serious Eats on how to make, uhm, brown sugar.*

*This feels entirely pointless, but maybe it floats your boat?

No recipes tried — too busy cooking rye, almond and rhubarb galette for the fam.