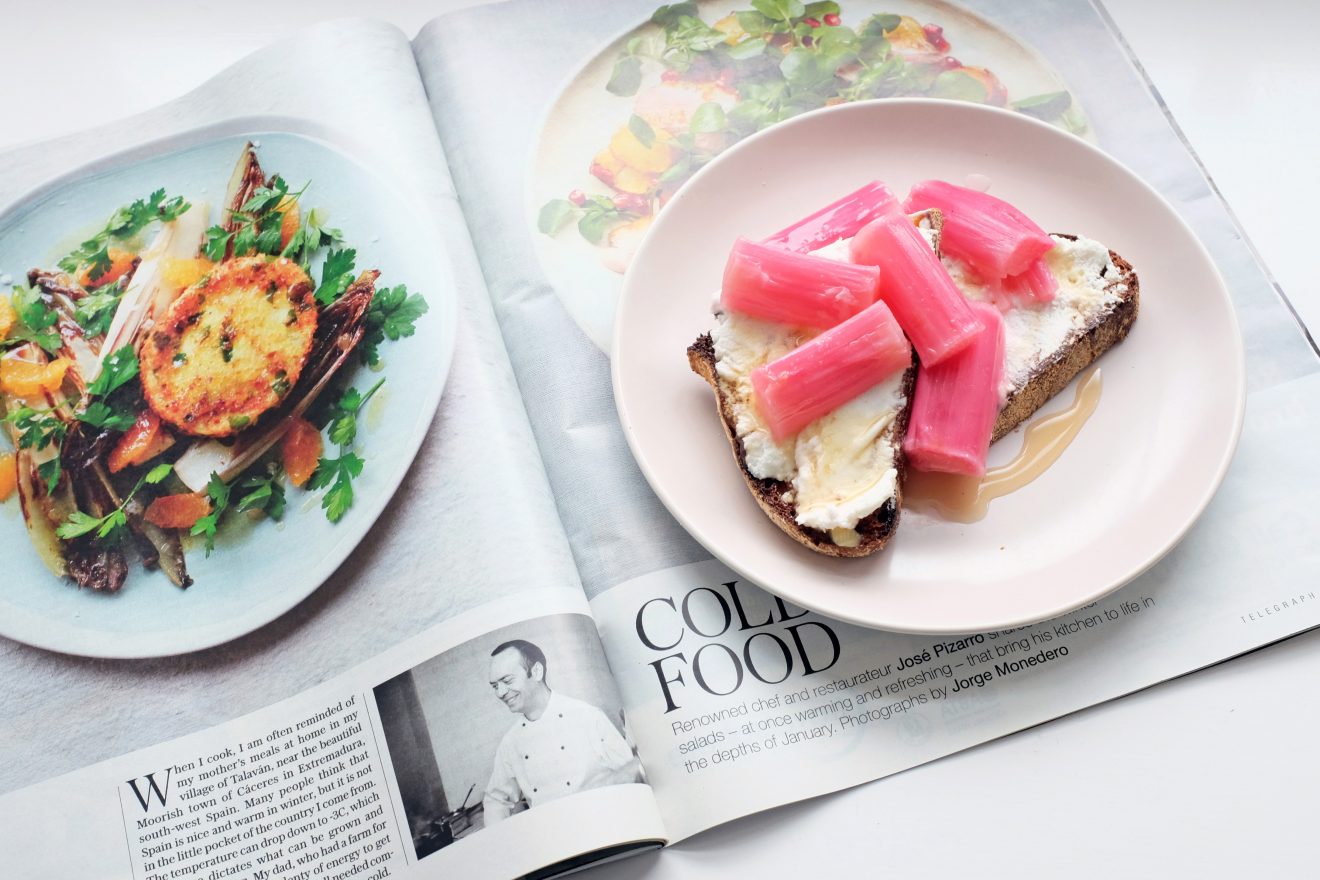 The news sections aren’t much fun at the moment. So perhaps turn to the recipes instead, even if only for a moment — there’s comfort and distraction to be found in a spot of cooking.

From the food pages this weekend: have a squint at Claire Ptak’s honey and dark chocolate cake; top soups and broth based meals come by way of Stephen Harris, Ken Yamada and Diana Henry; and Nigel Slater’s lamb shoulder with creamed butter and beans and spinach should raise the spirits.

What an apt time for Diana Henry to recommend Sunday Telegraph readers tuck into a bowl of chicken soup for the soul. There’s nothing that needs to be changed in her Mum’s recipe — simple, classic, spot on. That said, she included two other versions on the page: a Jewish chicken soup with matzo balls and a Vietnamese pho. The value of embracing a global outlook, heh?

Also on the soup front, I love the idea of Anna Jones’ all green miso soup with brown rice.

Yotam Ottolenghi chose to jump in a time machine and head back a more innocent, carefree times. 2010 to be precise, as he suggested Guardian readers have a go at making sliders. TBF, lovely sweet potato dough rolls and spiced fish or cauliflower fillings looked good.

The same supplement housed a lovely story from Rachel Roddy regarding a chance meeting with a lady called Glenda. Do read. And contemplate putting her winter veg bake on the table this week too.

Looks like Tommi Miers is away. Instead, her Graun column was given the once over by Ken Yamada, chef and co-owner of Anzu and Tonkotsu restaurants. He put forward a couple of different ramen recipes — one deriving from the Sunday roast and another mushroom based one. Interesting to read that you should add alkaline salts to the stock to ensure bounce and bite to the noodles.

At times of crises and desperation, I often to turn to the sourdough. Perhaps others do too — Xanthe Clay reported in Saturday’s Telegraph that sales of sliced are down, and ‘speciality’ loaves are up. Lots of sense in a the various toast topping suggestions too, not least Gill Mellor’s goat’s cheese with rhubarb and lovage.

Dreamy Sunday lunch from Nigel in the Observer: shoulder of lamb (a few herbs and spices, a dash of vermouth, and a quick blast) with creamed butter beans and spinach.

In what will soon become a flood, the first of 2017’s new cookbooks have begun to trickle in. From an extract in The Sunday Times, I’d say Catherine Phipps’ Citrus is one to look out for. I like a good single subject book — as the author can really get stuck into the nuances of a flavour or theme (and Citrus reminds me a little of Jenniger McLagan’s excellent Bitter: a taste of the world’s most dangerous flavour). Her recipe for fennel and lemon dauphinoise did the trick for me. Neat intro too: “Here, the lemon melds seamlessly with the fennel and cream despite being unpeeled — you will get the odd burst of sour, but it never feels de trop.” There are also recipes for mandarin chicken and an orange and ginger shortbread.

See also a set of sweet things from Flora Shedden’s Gatherings in Sunday’s Telegraph. There are pistachio macarons sandwiching ice cream for those who like a challenge. I’d wager the chestnut and pear frangipane will be less stressful to put on plates when you pals are round.

And Stephen Harris provided an excellent take on an East London pie and mash scenario with his smoked eel, parsley and potato soup.

None of the usual recipe crew in the FT Weekend Magazine, however Natalie Whittle spent some time learning how to make bagels courtesy of New York baking lej Sim Cass and Bread Ahead. Which led to recipes for pretzels, rye and caraway bread and, of course, some bagels (cinnamon and raisin). One for the project cooks.

Saturday’s Times magazine included a set of recipes from Monica Galetti; in promotion of her upcoming restaurant. Dover sole with muscat grapes, sea bass ceviche with blood orange and fennel, tart tatin, a gouda risotto. All fine. Though it seems the picture desk were keen to replicate the pre-Christmas masterclass of photos-in-the-style-of-your-aunt-that-night-she-went-to-Café-Rouge.

Good old chocolate and hazelnut dipped frozen bananas on Munchies. Also, more comfort food by way of Bruno Loubet’s dhal — which is to be topped by whatever fresh veg you’ve to hand.

Great reminder of Tel Aviv and aubergine sabich over on Food Stories. On a vaguely related note (though no recipe), if you’re twiddling thumbs have a read of a Serious Eats article about how Tampa claimed the Cuban sandwich.

I spied Gill Mellor’s honey, lovage, rhubarb and goat cheese on toast and had something similar as a cheering mid-afternoon snack. (Swapping lovage for ginger).

Honey and almond macarons (and a double espresso)