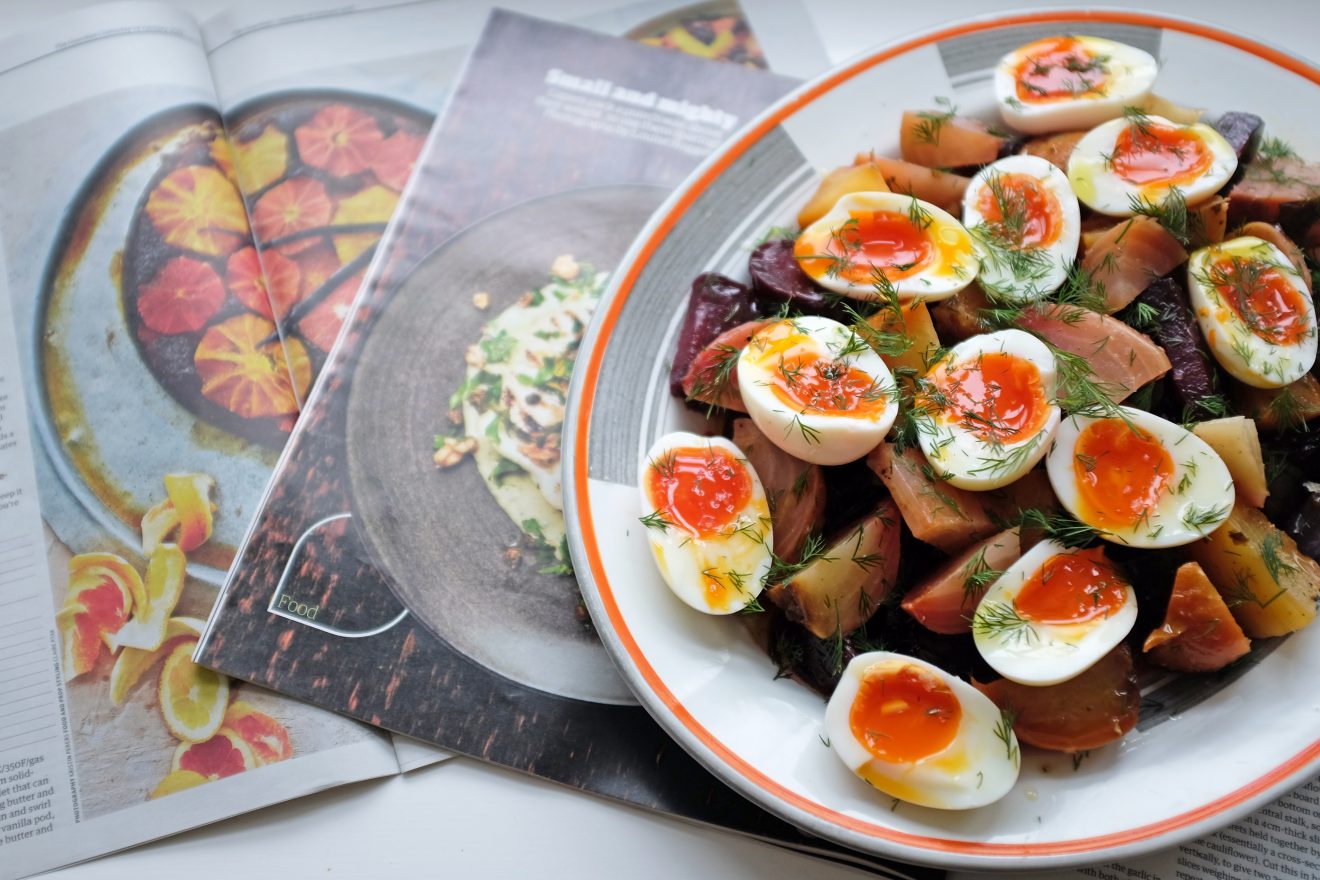 I had not the wit nor time to work out recipe themes this weekend, so here they are, ordered by newspaper. Look out for Claire Ptack’s cake, Rose Prince’s beetroot chicken, and Anna Jones’ tlayudas.

In Sunday’s Observer magazine Nigel Slater went fridge foraging, and found a creamy, yielding aubergine, mushroom and onion ‘ragu’ to go atop lentils; and a marsala enriched double cream, mascarpone and baked apple fool. Understandable that it was a last minute scrabble together. He’d also put five winter root recipes forward for the Observer Food Monthly. My eyes lingered on the salsify, bacon and goat’s cheese, as well as a swede and spinach loaf.

Also in the OFM, Fergus Henderson introduced a set of recipes from Marcella Hazan’s Classic Italian Cookbook. No frills, bags of flavour. Look to the casserole roasted lamb with juniper berries, and espresso coffee ice cream with hot chocolate sauce.

Much to my wife’s disgust, there’s only one thing I use more excessively than anchovies, and that’s capers. Yotam went a bit mad for them in Saturday’s Guardian magazine. I loved the braised oxtail with celeriac and capers, and wouldn’t say no to the caponata-like aubergine, capers and sultana number.

Had I any dark rye flour in the house, I would have made Claire Ptak’s orange, ginger and rye upside down cake in Cook. (Instead, Nigel’s beetroot, coffee and chocolate number from Tender I).

Also, vinegary things in Samin Nostrat’s Cook Residency column. Really liked the sound of a pomegranate and Parmesan vinaigrette on chicory, and a chicken in a buttery, vinegary sauce. Lots of sense in her intro too.

RHUBARB IS HERE. Expect a number of recipes covering this Godly pink stick over the next few weeks. Thomasina Miers got in early for the Graun: roast pork belly and pickled ‘barb; and an intriguing rosemary infused goat’s milk jelly, with Pernod poached rhubarb adding interest.

Rachel Roddy’s essential read this week was on fish, tomato, wine and Vera.

And Anna Jones was California dreaming with a couple of modern Cali-Mex dishes (so much better than Tex-). Try roast avocado and charred salsa tacos, or a gorgeous looking fig and pinto bean tlayudas (like tortilla-based mini pizzas).

I’ve said it before and I’ll say it again: buy Jordan Bourke and Rejina Pyo’s Our Korean Kitchen (at time of writing, it’s £4 on Amazon, which is mental).  Diana Henry’s been a backer for a long time too, and her Sunday Telegraph Stella mag recipes were on a Korean for beginners theme: a super simple and outrageously addictive cucumber salad; Bulgogi beef; plus Jordan’s mixed veg bibimbap.

There are loads of Bake Off alumni now. And whilst it’s easy to sneer at TV-launched careers, many of them are serious talents (Edd Kimber, John Whaite, Chetna Makan, Frances Quinn, James Morton to name a few). Flora Shedden looked to be another of them, and indeed it turns out she’s just landed a baking column for The Telegraph, and a book out in a few weeks. Diana Henry wrote about her, whilst Flora provided a few recipes for using up any cranberries hanging around post Chrimbo. A cranberry and crystallised ginger cake looked good.

In The Sunday Times, Jamie bunged some sweet potatoes, sweetcorn and black beans in a tray and served it with rice, limes, mint and Tabasco. There was a banana loaf by Candice Bake Off Brown too.

In Saturday’s Times Magazine, Nadiya presented a nice idea for a Cranachan filled Victoria sponge. She left out the whisky in the Cranachan due to her religious convictions. Which is totally fair … but if you make it, add a few drams back in.

There was some Skandi fish too (well, fish by a Danish chef). And soups in The Weekend.

Need something sweet to follow Diana Henry’s Korean recipes? How about some shaved milk — as if by magic there was a recipe for Milk Bingsoo on Munchies last week.

And over at Lucky Peach, 17 ways to pimp instant ramen noodles.