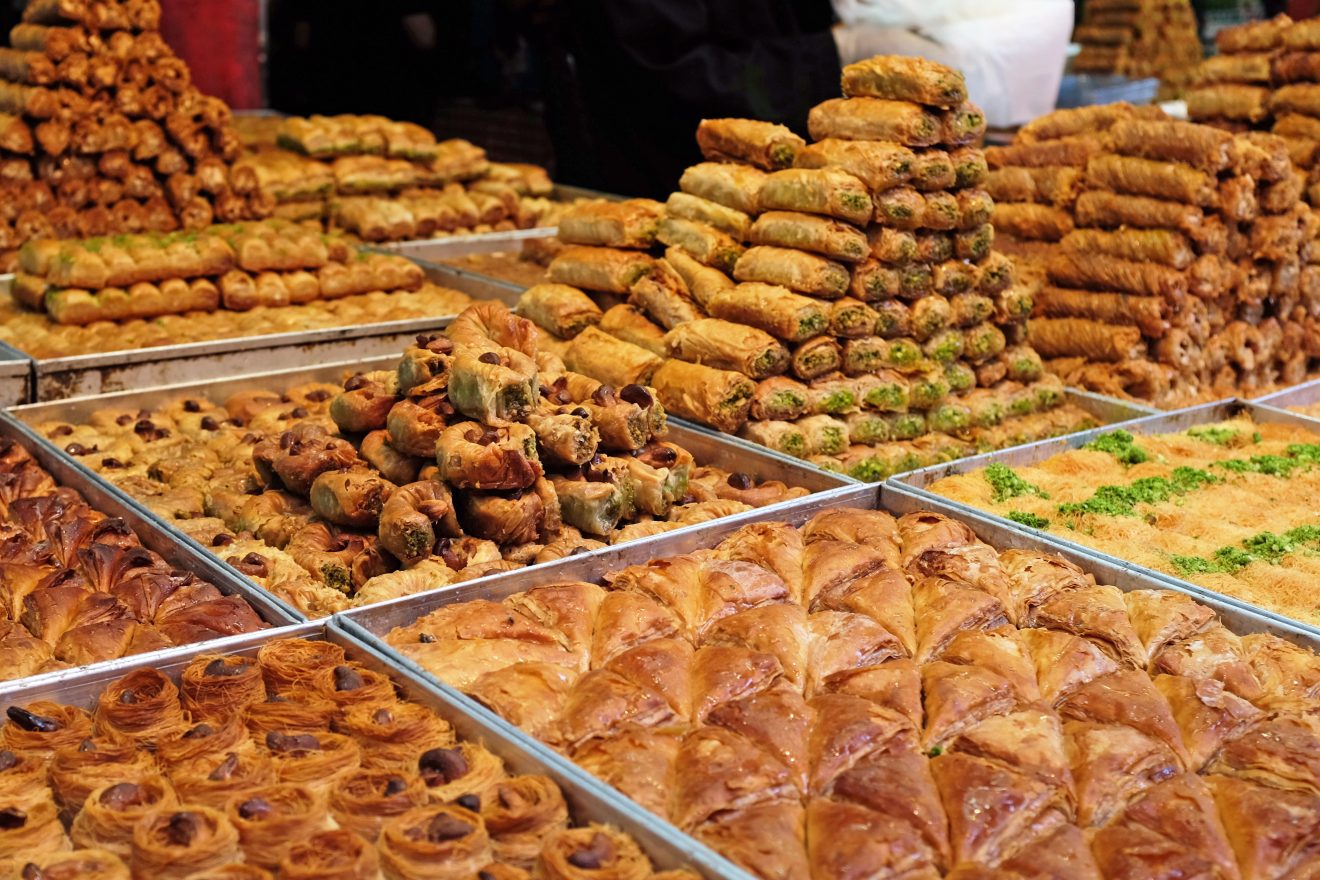 By my reckoning, we’ve only one more weekend’s worth of Christmas recipes to get through. Stay strong.

Jamie Oliver’s Banoffee Alaska might be a crowd pleaser over the festive period. There was an iced amalfi cake too (I prefer a drizzle), brownies (sour cherries and macadamia nuts), and billionaire’s shortbread, which looked just like millionaire’s (but who’d get out of bed for a mere seven figures these days?).

A day earlier, Nadiya Hussain’s white chocolate and strawberry palmiers recipe was necessarily sugary too. Inexplicably the finished pastry was shown interspersed with fallen leaves. Is there a hidden message or instruction here? Has Red Squirrel moved the nut store?

Once again, ‘fast’ things from Donna Hay. Tasty looking stuff, actually. Like duck with polenta and a quince and juniper sauce; and chilli, honey and sesame beef skewers.

There were loads of Christmas ‘tips’ in Saturday’s Weekend. Including Marcus Wareing making things easy, Mary Berry not stressing out, and a woman in a party frock holding a turkey. More helpful, but also on the sweet theme, were a few ideas on the old ‘alternative to Christmas pudding’ theme. I like the look of Nigella’s vanilla bundt and el Gordo’s Christmas bombe.

Away from cooking, do read AA Gill’s final column, on cancer and the NHS.

A couple of fussy recipes from French chef Anne-Sophie Pic. Butternut veloute with coffee cream might be interesting.

Loved Thomasina’s ideas for cooking with parsnips: gratinated with an apple allioli and made into a cake with brown butter icing.

For Ottolenghi fans, it was a tandoori paste that could then be used on chicken, prawns and, my favourite, roast cauliflower wedges.

Sunday was an OFM day. Lots of taste tests and round-ups, but also a set of new-to-me-and-perhaps-to-you-too Anglo-Italian Christmas recipes by Joseph Trivelli of the River Cafe. Slow roast duck stuffed with salami and fennel tops, sprouts under oil, pear, persimmon and ricotta crostata, and a coffee and grappa sorbet.

Also, Nigel Slater’s Christmas sides this year include roast sprouts with honey on parsnip mash, a whole Cumberland sausage with pancetta and dates, and lovely turkey mince, fennel seed and lardo stuffing (meatballs) in a cranberry and orange sauce.

Nigel’s recipes in the magazine were written with non-meat eaters’s Christmas meals in mind — parsnip, seed, herb and apple loaf, served with a mushroom and stout gravy.

Diana Henry provided a few suggestions for the meals leading up to Christmas, with a good looking Guinness soda bread to go with smoked trout and a beetroot remoulade, pork belly and a spiced apple jelly, and roast squash with a walnut and herb relish. Oh, and slow gin and champagne jellies, and a mighty Bramley apple, marmalade and whisky trifle.

But if I could eat anything from the weekend’s pages right now, it would be Stephen Harris’ whole roast salmon served with Jansson’s temptation (cured sprats, not anchovies with the spuds and onion).

Intriguing beef broth granita and icy buckwheat noodles over on Munchies (bit of an effort). These collard greens look good too.

And an interesting extract from an American book called My Two Souths over on Lucky Peach. The author Asha Gomez hails from Kerala but lives in Atlanta Georgia. The result: Kerala fried chicken and Low Country rice waffles with spicy syrup. And more likely for home cooks, mint masala chicken roasted over fennel and spuds.

Nothing from the papers. The photo above is of baklava in Tel Aviv’s Carmel market.

Double espresso and a grappa