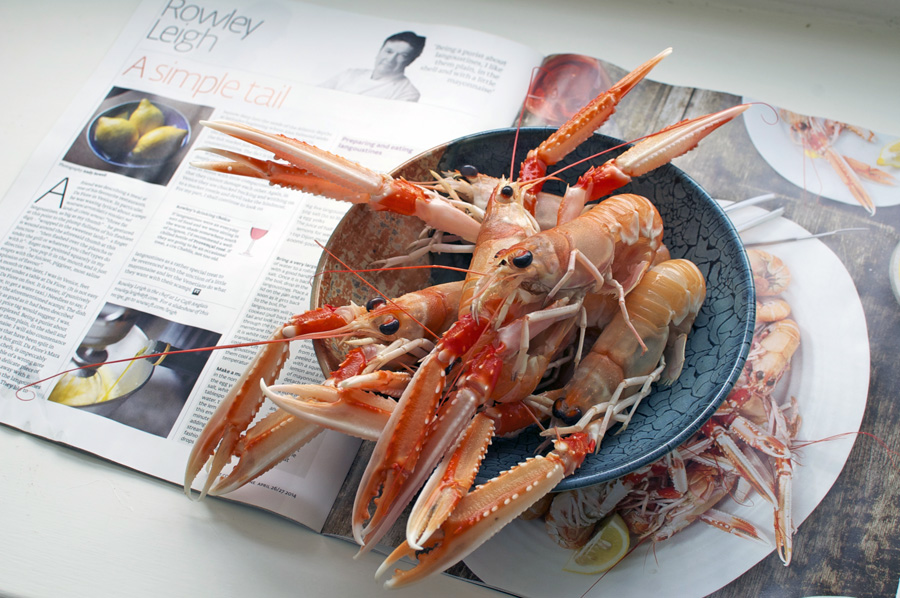 Crikey. There was a lot going on in the food pages this weekend. Here’s a snapshot of some of it.

A little repetition never hurt anyone

I had a couple of “didn’t I just read that somewhere else?” moments.

Per Anders Jorgensen is a photographer with top chef connections. He’s got a book coming out on the subject of staff ‘family’ meals at the world’s best restaurants. Some great shots (obviously), but also a selection of eclectic recipes. I like, for example, that there’s a brownie recipe in the Noma section. There were extracts in the FT and The Sunday Times.

Thomasina Miers and her chillies got a fair bit of coverage. She’s taking point on the HFW (RIP) Guardian slot ATM. Three tempting dishes this week: seafood tostados; coriander spice paste chicken; and peanut butter and cayenne ganache fondants. Tommy was also in Saturday’s Times. Eight unusually good recipes for their advertorial slot: including Spanish fish stew; Sichuanese aubergine; and dark choc and olive oil (and chilli) on toast. Did I see her somewhere else as well? Maybe it was on the telebox.

Fergus Henderson was in last week’s Cook. He was in the Observer this week. No complaints my end – I love the writing, the ethos, and the bone marrow with parsley salad. Do read.

Hidden somewhere in Saturday’s Torygraph was a lick smacking little teaser taken from a new Konditor and Cook tome. The rhubarb and orange meringue looked particularly good. I note that secrets were revealed for the famous K&C curly wurly cake, but presume I’ll need to buy the book to learn more about their awesome whiskey bomb.

Florence Knight made an appearance in Sunday’s Stella. Simple, ingredient driven recipes as always. I tried her baked orange with thyme and cream on Saturday evening. More on that below.

Tom Kerridge began a new monthly column in Cook. Has anyone ever said a bad word about the man or his food? Doubt it. He kicks off with a cracking bunch of smoked eel recipes. Yes please to the eel, poached egg, muffin and mustard sauce brunch idea. Nice video online too. You’re looking good, chef (but don’t waste away).

On the theme of never a bad word said, Angela Hartnett provided the recipes for Gizzi Erskine’s Sunday Times column. Gnocchi with speck and morels sounded super. In fact, all of the recipes did. The rest of The Dish segment was a decent enough read, so it was a tick for the ST this week. Gizzi looked great … though I can’t help but think it’s weird they never dressed Lucas Hollweg up in herb and veg headgear.

A round up of the old stagers

Rowley kicked back in the FT with an easy mayo and langoustine thing. Inspiration rather than a recipe, really.

Yotam went for mangoes. Cold rice pudding with passion fruit and mango (interestingly (or not) it’s a different rice pud method to one he suggested for a rhubarb topped one a month or two ago); mango ice cream and a knowingly 70s chicken and mango dish.

Stevie Parle showcased a few noodle recipes in Saturday’s Telegraph. Nigel had a couple of miso recipes in The Observer. And Granger put on three different fish cakes in The Independent on Sunday. I was most keen on the Indian spiced fried ones with raita and mango chutney.

Mark Hix cooked niche meats: goat; pig cheek; cured pig cheek (guanciale); bacon ribs. All worth trying to source. I was most tempted to recreate his goatherd pie and guanciale and bubble and squeak soda farl.

There were ten avocado recipes in Cook. Some good ones. Some weird sounding ones. If you’ve never tried avocado ice cream, give it a go.

The parents were down. So (at great expense) we had langos like Rowley, a prosecco and scallop risotto based on a Locatelli recipe in the FT from a while back, and Florence’s baked oranges and thyme in dessert wine.

Dad announced he didn’t like langos. The risotto was “acceptable”. The oranges were more of a success.

Jeez. It’ll be supermarket hummus and Pot Noodles next time.