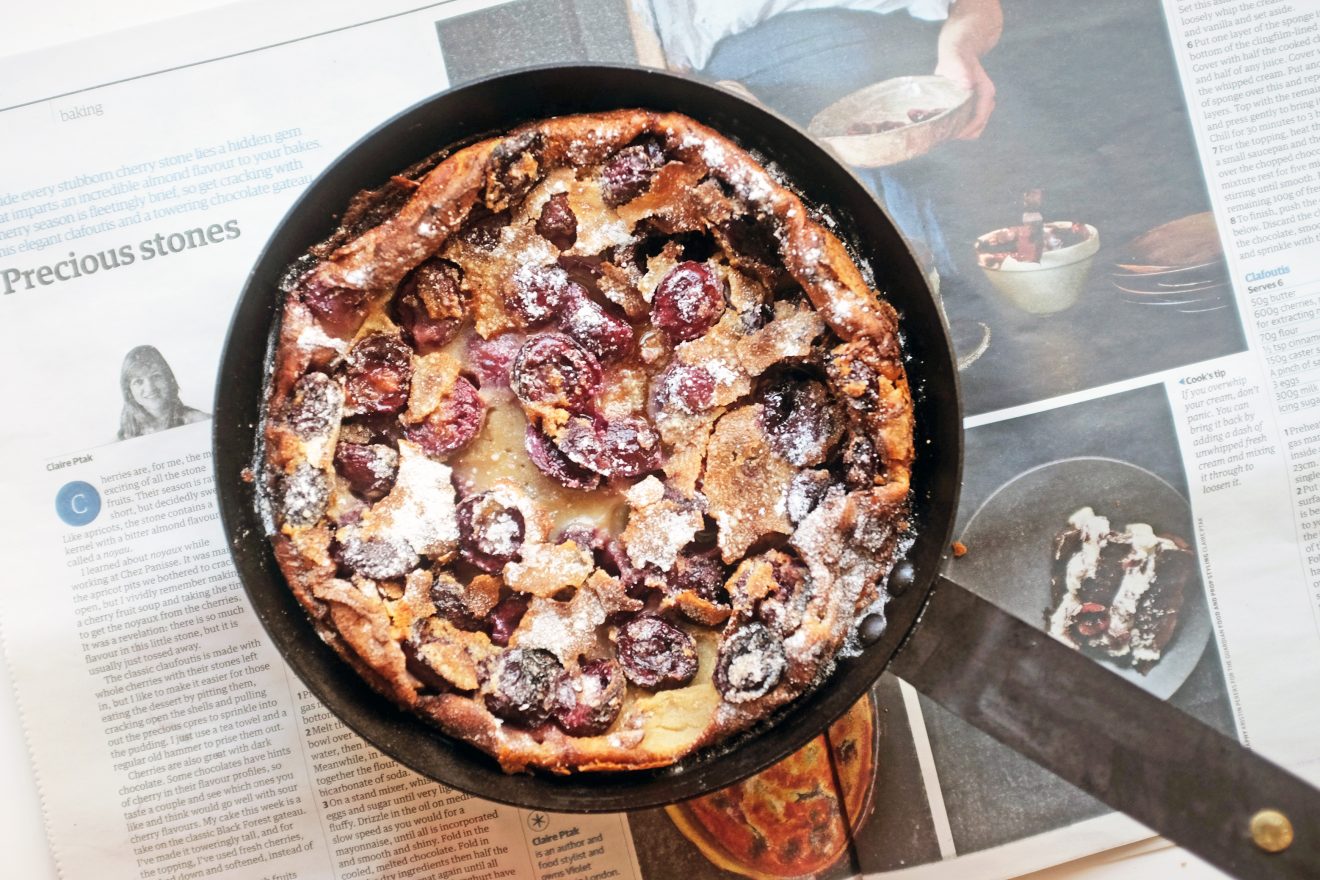 What a discombobulating tangled mess we’re in. In light of this, it seems sensible to set out #Supplemental in an ordered, logical fashion. So, here are this weekend’s recipes grouped by the corrupt, meddling, king-making organisations, sorry, newspapers, in which they were published.

Brad McDonald began his Deep South themed Cook residency with some thoughts on deep frying. His battered chicken is tried, tested and acclaimed, so consider his recipe next time you drag the fryer out (you’ll need to start brining the chooks three days before, mind). Enjoy his pineapple doughnut-fritters while you’re at it. Looking forward to the next three weeks – his book Deep South; new Southern cooking is super good.

Nice insight from Claire Ptak on how to make the most of cherries: suggesting we crack the stones to remove and use the almondy essence of its kernel. Her cherry chocolate cake looks wonderfully decadent. Read to the bottom of this post for more on a clafoutis.

Rachel Roddy’s recipe from Rome was for a comforting, hunger-sating pasta and borlotti bean dish (pasta e fagioli). I love it when cooks are given the space to add insight, like: “for this recipe, it is important the beans are cooked to the right point, which, for me, is teetering on the farside of tender (my partner Vincenzo would have a bit more bite).”

Yotam wrote about spreading and pasting in the same supplement. My favourite of his four colourful dips and purées was a spiced red lentil and curry leaf number.

Go wild with your radishes and consider Bee Wilson’s selection of recipes in the Observer. See her short essay providing context, too.

Nigel Slater’s Observer recipes suggest he can’t be arsed to cook at the moment. I know how you feel, Nige. Still, lovely ideas for raw fish and meat: a refreshing, Japanese seasoned mackerel tartare, with samphire and tomatoes; and beef, anchovy and pickled cucumber tartare with mustard dressed asparagus.

Couldn’t see a recipe in this week’s FT Weekend. Not online anyway. I blame Johnson and Gove.

Not a bad week or so for The Telegraph’s Stephen Harris, what with being named best cookery writer at the Guild of Food Writers Awards, and then his restaurant The Sportsman as Britain’s Best a few days later. His celebratory recipe? ‘Fruity’ duck with cherries and peas.

I thought Rose Prince’s self catering summer holiday menu was a grand one. Lots of simple but crowd-pleasing recipes: baked aubergine with tomatoes, ricotta and mint; a roast cod aioli, with soft boiled eggs, tomatoes and fennel; prosciutto, fried sourdough and beetroot salad; plus pan cooked peaches, apricots and plums with vanilla and cardamom syrup.

Diana Henry is a fan of the U S of A. Her Sunday Telegraph Stella mag column featured fond notes from her recent trip to New York (and of her first trip nearly 25 years ago), plus recipes inspired by that visit. Sweet, sour and revitalising appear to be the Big Apple’s thing at the moment: fish sliders with pickled cucumber and harissa mayo; raw sea bass with peppery radishes and nasturtiums; fresh ricotta with truffle honey and thyme on sourdough; and strawberry and buttermilk ice-cream.

Russell Norman helped Saturday Times readers up their brunch game. How about a sausage, mushroom and egg topped pizzetta or wild mushrooms and ricotta on sourdough? There are ricotta doughnuts and various bruschetta ideas too. Though the dish I reckon I’d like most, was a poached egg on an artichoke heart, pea and broad bean scafata.

In the Times Magazine, GBM judge Oliver Peyton proposed a host of ‘British’ summer dishes. Can’t really go wrong with pollock, ham, cider and mussels or gooseberry and raspberry crumble (well, redcurrants would be better than raspberries, surely?). Nearby, there was a recipe by Nadiya Hussain for cocoa powder sponge with chocolate butter icing.

It looked as though The Sunday Times food team had been busy bees in June – this month’s The Dish, which was packed with (still seemingly quite hopeful) BBQ recipes, including:

A set of ace Meera Sodha recipes from her new book Fresh India (which I have and is great). I loved, in particular, the idea of a kottu roti a “jumbled heap of shredded bread, crispy vegetables and egg, seasoned with a fiery mix of spices”, and some mango and paneer skewers. Also butternut squash seekh kebabs.

Plus a number of recipes from Jamie Oliver / Jamie’s magazine. A sweet spice and BBQ glazed pork loin looked grand. Glad that he (they?) advised “use a meat thermometer and stop when it reaches 72C inside — you don’t want it pink, but please don’t cook the hell out of it either.” Also, good chicken thighs and an ambitious mixed fish grill.

Look hard enough, and you’ll see my hot smoked trout, mango, chilli and avocado salad in the mix too.

Given today is 4 July, it seems apt to send you to Serious Eats’ Independence Day recipes. Tbh, I’m not sure what kind of meal you’d end up with – there’s a wide variety of cuisines and styles going on. BUT, this cherry pie looks good.

Also, a quality potato salad over at Food Stories.

I plumped for Claire Ptak’s cherry clafoutis. This was easy to make (including the smashing of a few stones to half inch the noyaux), and I’d suggest it’s a good dinner dessert option, as you make it in advance and leave it to cool rather than cook to order.

Mine huff, puffed, sank and cracked a little more than intended, probably due to the overly enthusiastic right hand side of my oven. But once cooled it sliced beautifully and was a real pleasure to eat. The lady wife even suggested she’d like to get her hands dirty and make it in the future, which is pretty much a first.

Also, leftovers were excellent for breakfast on Sunday.

Mackerel tartare with samphire and tomatoes

Fruity duck with cherries and peas

Subscribe to the Rocket & Squash newsletter for monthly emails. These bring together the latest blog posts, plus a few other things from elsewhere that you might find interesting. Sign up using the envelope button at the base of the site. Next one later this week. 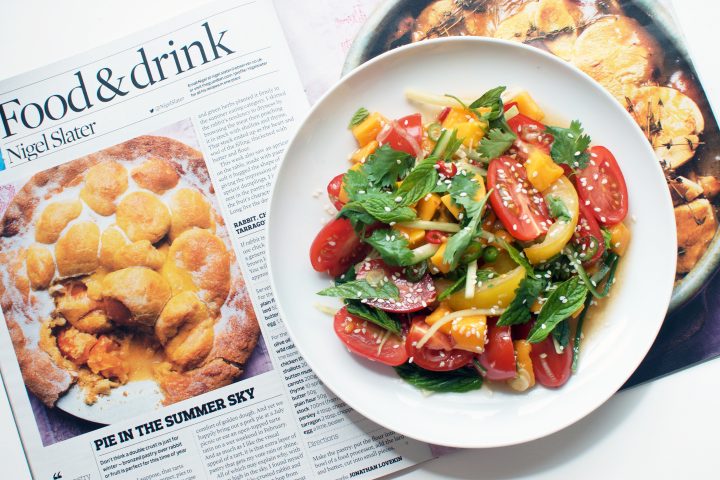 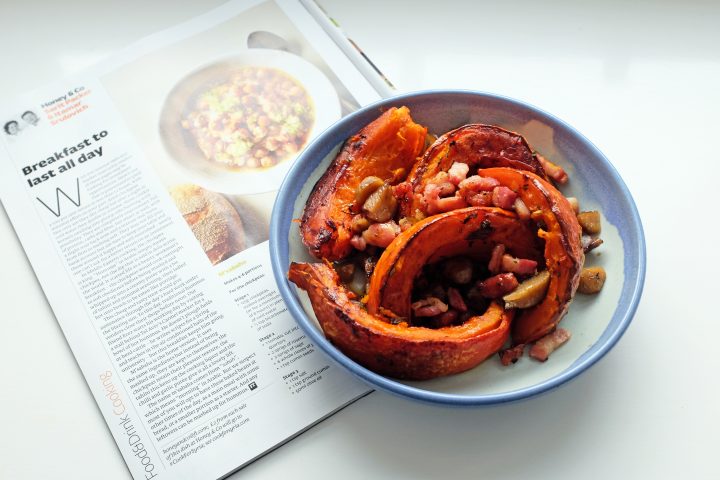