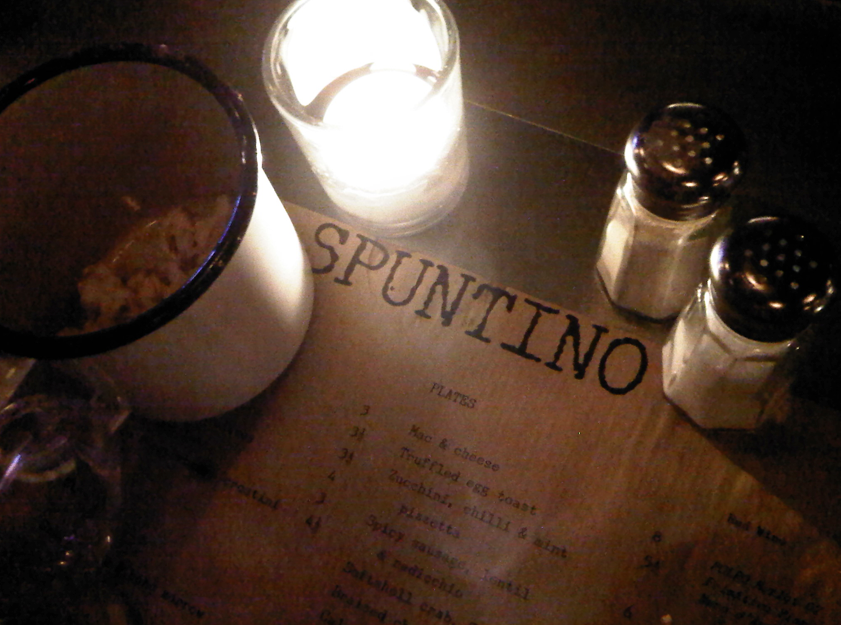 ‘Oi‘ she shouted. I ignored her and hurried on.

‘OIIIGGHH‘. She shouted again, and again I tried to ignore her. For I haven’t been shouted at in public by a sex show hostess for quite some time. And I was in a hurry.

‘OOIGGGGGHHH!!‘ I had to give her credit for persistence, so I turned and looked at her.

‘No problem darhhling’ she said with a sweet, inviting but utterly toothless smile. ‘Wanna come in?‘

Happily I felt able to decline this offer and instead headed to the rusted, innocuous, untitled and almost hidden shop front opposite. I was already excited enough, without needing assistance from the hypnotically seedy neon lights of Soho. For I was hurrying to Spuntino, the newest (like one week old) venture from the restaurateurs behind Polpo and Polpetto.

Spuntino is not a restaurant in the traditional sense. It’s a modern day Speakeasy serving predominantly Bourbon based cocktails, a few different wines and Meantime beer, and also happens to offer novel and interesting small plates and bar snacks.

I don’t mean to do it disservice – the food is by no means incidental and I suspect most people will go there for a feed above anything else.  But I personally don’t think it’s the kind of place you should go with the intention of religiously working your way through the menu.  You’ll be better off sitting down with a drink, or two, or three, soaking up the atmosphere, setting the world to right and nibbling at the odd tasty snack. The seating (20 counter spaces around the u-shaped metal bar, a further 6 at a small table at the back) is surely set up for exactly this purpose?

That said, the food is good and probably trend setting, and we left full and happy.

A “spiced mackerel slider” was a dense fishy mini burger. The patty was well seasoned and full of flavour and it was served with a great tangy red slaw (I recall beetroot and red cabbage, though I wasn’t taking notes). There are a couple of other sliders on the menu – a more traditional beef and bone marrow one was on the money, as I suspect the lamb and the salt beef versions will be too. I can’t think of anywhere in London serving this kind of bar snack at the moment, but I expect it’ll be copied soon.

Boiled egg and soldiers was also pretty novel – the egg (a perfect soft boiled) was served peeled, but with the shell replaced by a crispy breadcrumb crust. A scotch egg without the meat. Ahead of the game and very cool without showing off, it epitomises Spuntino (though the casing could do with more seasoning).

I loved the salty, jet black plate of squid ink, calamari and chick peas. A chopped salad was a fresh and crisp contrast to the otherwise fairly rich food that we ate.  It was unusual in that, unlike the rest of our dishes, I felt £5 was a little expensive for what it was.

I suspect you will have read or will read about Spuntino’s truffled egg toast. This is a thick hunk of a toasted cheese sandwich. It’s doused with plenty of truffle oil and has a perfect runny egg yolk in the middle. It’s a decadent way to induce a heart attack. The place had been open for 4 nights when I went, and already this had become known as Spuntino’s (blogger appointed) signature dish. It sure is tasty, but I found it pretty hard going. You wouldn’t want to eat it on your own and will definitely want to wash it down with a beer.  Worth a try and again unique (I think) for London. But I think I’ll have a few other things on the menu before ordering it again.

We finished, as you should too, with a peanut butter and jelly sandwich. An ice-cream triangle of yumminess. Arguably the best thing we ate and a must for anyone who even slightly enjoys nut spread. Worth mentioning too that we enjoyed some freebies at the start (a tin mug of chilli popcorn when we sat down, and some egg plant chips and fennel mayonnaise) and that we only tried a small selection of the dishes on offer – there are numerous other things I look forward to trying next time I go.

Given that I’ve proclaimed this a bar that serves good food, what of the drinks? Well, students of Classics and of Wikipedia will recognise the man in charge of the bar as the son of Telamon, ruler of Salamis and a hero in the Trojan War. I don’t recall there being much in the Iliad about Ajax, the second most important warrior in Agamemnon’s army also being a dab hand at mixing a cocktail.  But clearly Homer missed this detail because the (admittedly Manhattan island rather than Ionian islands inspired) drinks that we tried were very good. These included an off-menu, bespoke tipple concocted on the spot for us with the kind of style and level of service that really endears customers to a venue.

My point is that, though the food is tasty, it’s the space, the style and the atmosphere that make Spuntino a winner. The light is dimmed to exactly the right level. The decor – from the tiled walls, to the metal counter and the bevelled ceiling above – and the music are reclaimed and vintage, yet somehow absolutely of the moment too. It’s basically f*cking cool.

As at Polpo and Polpetto, there’s a no booking policy, so you’ll need to be prepared to stand in line (or have a friend stand for you whilst you’re hurrying past bright lights and toothless madams … thanks bud). But the wait will be inside, will fly by, and will be well worth it.  Wanna come in? You probably should.