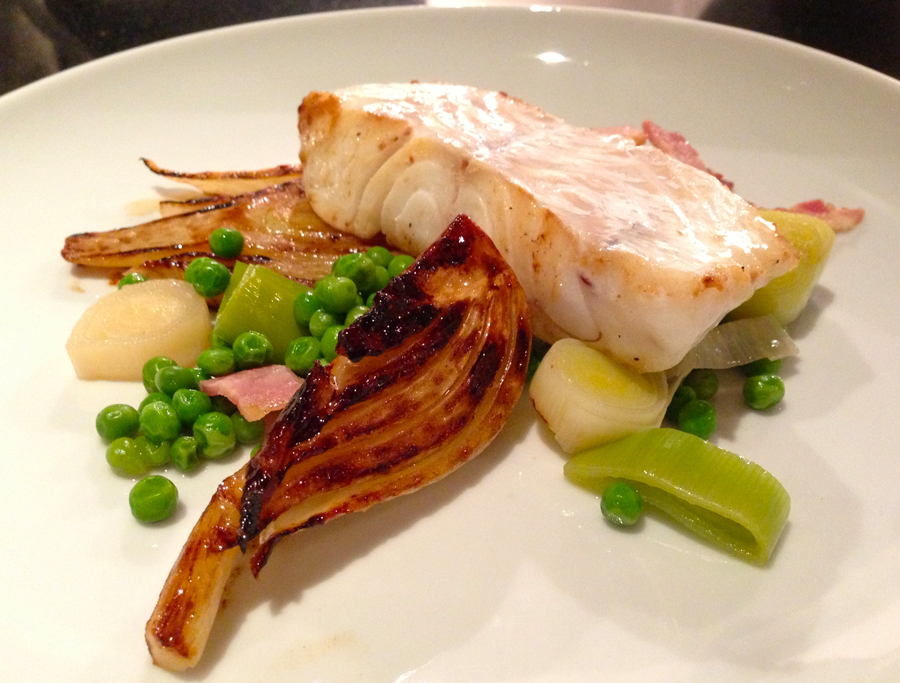 Cooking vac packed ingredients in a water bath has got a funny reputation.

‘Sous vide’ gained prominence in the mid 2000s as an apparently magical way of cooking that transformed meats and fish into foodstuffs with etherial qualities, hitherto unknown to man. Today, the technique has either been de-mystified a bit, or we have become more exposed and are therefore de-sensitivised. But the fact that x chef sous vides his lamb testes will still be mentioned on a menu, or stat-bombed into a conversation by someone who knows those sorts of things.

Sous vide does indeed have an interesting effect on food. From a pure specky point of view, because water is an efficient conductor of heat, and because it can be controlled to the tenth of a degree, proteins and connective tissues can be cooked to the optimum combination of temperature and time. Which can lead to incredibly succulent and juicy results, through the whole piece of meat/fish/veg (rather than being perfect inside, but overcooked and dry outside).

But it ain’t magic and sous vide cooked food ain’t the Holy Grail: for a start, food cooked purely sous vide doesn’t get the benefit of Maillard reactions and caramelisation (that’s meaty brown and sweet flavours and textures, to you and me), which occur at higher temperatures (i.e. when frying or roasting); ‘sous vide’ does not mean ‘better’, for example I’m personally not a fan of fish done in a water bath – too gelatinous; the whole controlled temperature thing can be done in a combi oven these days any way; and there’s an argument that the technique de-skills cooking too.

The unglamorous truth is that a number of the reasons restaurants use water baths are not deliciously gastronomique at all: it minimises weight loss (so higher yield); it prevents cross contamination; it’s clean and requires less washing up; lots of portions can be cooked at once in a controlled manner; and the likelihood of food being overcooked by an incompetent or overworked commis is reduced.

But that doesn’t mean sous vide is not a useful method, or that you can’t get interesting results by using it. Some ingredients really benefit from controlled cooking. It’s also possible to impregnate ingredients with seasoning in a way that isn’t achieved with more traditional methods. Moreover, like most techniques, it’s best used in combination with others: sous vide an ingredient with various flavours and then finish it in a hot pan or over a char grill to get the best of all worlds.

Boring diatribe over, I borrowed a sous vide machine from the brilliant Sous Chef for a few weeks. It helped me to cater for 40 or so people at once. And then I played with it for a while at home.

A number of the high end restaurants I’ve wandered around have cooked their fennel portions sous vide – no wonder, as it’s exactly the kind of fibrous ingredient that can benefit from a bit of controlled cooking. So I thought I’d give it a go too.

I cooked 60mm thick ‘flames’, and wedges that were about an eighth of a bulb each, with a dash of orange juice, thyme and a bit of star anise at 84C for 45 minutes. This both tenderised the fennel and impregnated flavour in a way that couldn’t have been done through frying, roasting or poaching. Then I chucked the vac bags in some cold water to stop the cooking. When I wanted to eat, I fried the cold fennel quite hard in a bit of butter, and added another splash of orange juice which reduced quickly, giving colour and yet another level of flavour. The result was a slight crunch on the outside from the caramel and charring, and a smooth, yielding, moist but not at all mushy flesh.

If I had more space and more money, I would probably buy a sous vide machine for my home kitchen. They’re very reasonably priced relative to other gadgets and the Sous Vide Supreme is actually pretty compact. The precision aspect of it is very useful and it’d be especially good for entertaining, it’s just not top of my wish list at the moment. The biggest limiting factor for domestic use are the home vacuum packing machines, which just aren’t as good at creating a vacuum and sealing as pro ones – particularly when there’s liquid involved. I don’t imagine it will be long till that’s improved though.

They didn’t ask for promotion, but I’ll do it anyway because they’re excellent: you can see all of Sous Chef’s home sous vide products by clicking through here, and / or if it’s not too late, check out their very thoughtful Christmas gift ideas and hampers here (I like the look of the ravioli stampers, ahem) and then browse the store more selfishly for tempting kitchen items.

Set the Sous Vide machine at 84C. If you don’t have one, the flavours still work – slow roast the fennel at 150C for about an hour with olive oil, salt, pepper, thyme, anise and 60ml of orange juice.

Split the fennel bulb in half vertically, removing but keeping any of the herby leaves, and trimming any woody tops. Also trim the base of any brown bits, but try to ensure the bulb stays together. Divide one half lengthways into four equal wedges. Slice the second half from top to bottom into four flat ‘flames’. Vac pac the fennel, probably into two different bags, with the star anise pieces (half in one bag, half in the other), thyme stripped from the twigs, the peppercorns, about 15ml of juice in each bag, and 10g of butter (also per bag). Vac and seal and then cook for 45 minutes. Once the time is up, drop the bags into a bowl of cold water.

Prepare the leeks by removing the outer layers, cleaning and slicing to 1.5cm discs. Slice the bacon and fry in a saucepan. Turn the heat down so it’s low-medium, add the leeks, a splash of water – about 1 cm – and a knob of butter. Put a lid on. The leeks will cook in 4-5 minutes, and the water and butter will create an emulsion making the leeks lovely and glossy. After 4 minutes, add the frozen peas, grind in some black pepper, give it a stir then take of the heat and put the lid back on. The residual heat will cook the peas by the time everything else is finished.

With the leeks cooking, season the cod and fry, skin down, on a medium-high flame in vegetable oil, for about 3 minutes. Watch as the colour changes up the side of the fish. When the colour has changed 3/4 up the side of the fish, squeeze lemon over the fish then carefully flip the fillets onto the flesh side and take the pan of the heat. Let the fish sit in the pan for 2 minutes as you finish everything else.

As you’re juggling the fish and leek pans, remove the fennel from the bags, put another frying pan on a high flame, add butter, and when it’s foaming place the fennel in the pan. Let it brown and caramelise for about a minute, flip the vegetable pieces and then pour in any remaining orange juice – which should rapidly reduce and caramelise. The fennel is done when you’re happy with the colour.

Everything should be ready now. So check seasoning, squeeze more lemon if necessary, plate up and eat. I removed the cod skin for the photo. Not sure why. 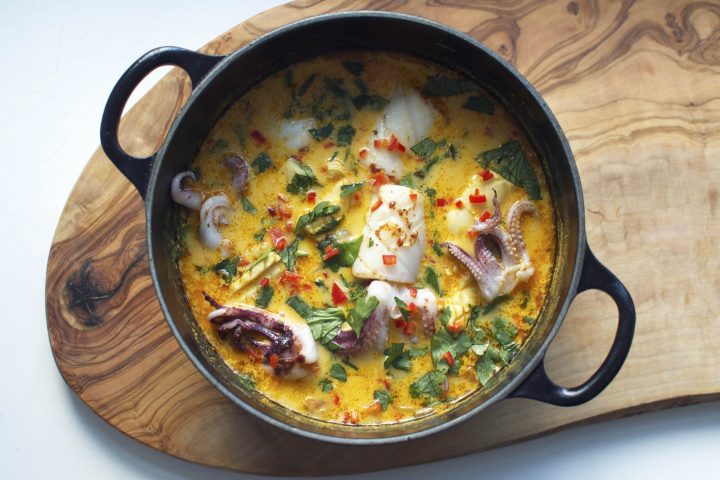 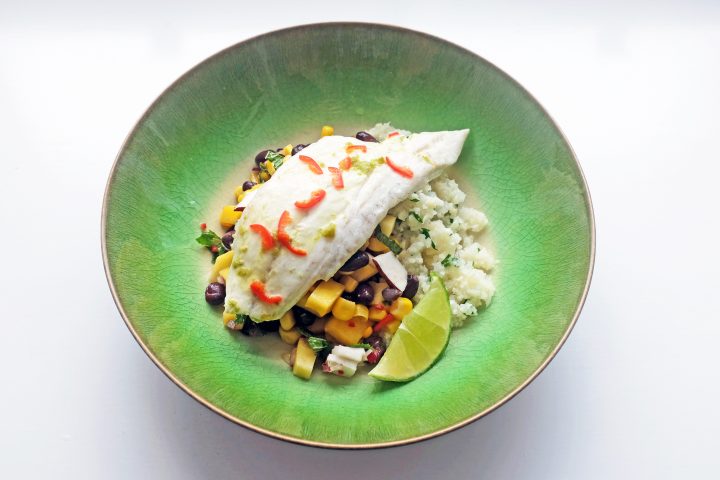