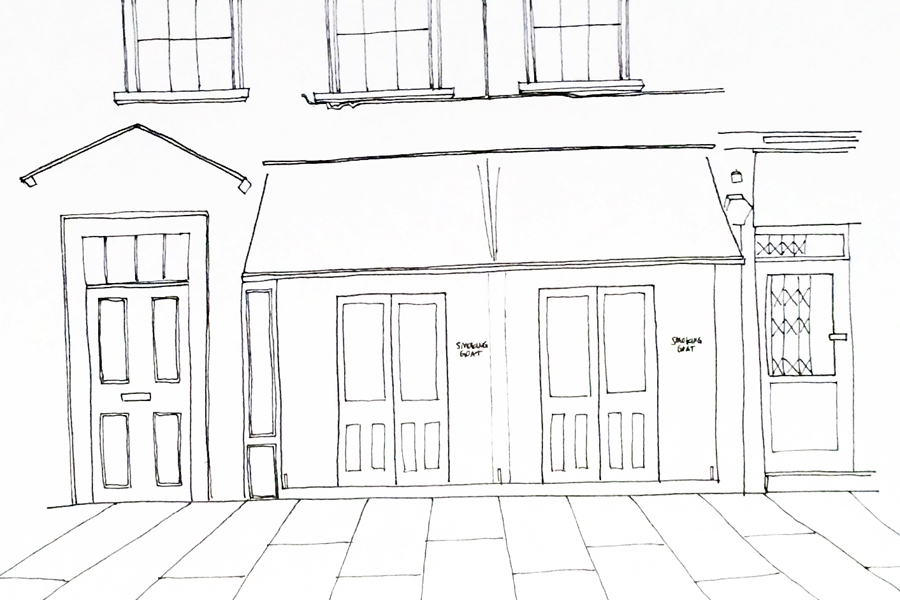 Update 5 October 2016: I’ve returned many times since, often as a large (and bookable) group to their now extended rear room. The food is even better than the early days, majoring on adding Thai flavours to native breed meats and the freshest of fish, to memorable effect.

I shall, for once, cut straight to the chase.

Last Friday I went to a preview at a new restaurant on the fringes of Soho. I sweated a little, contracted short term halitosis and got covered in food. You know: a fifteen napkin and a trip to the sink filthy dirty kind of covered in food. Then, when home, I had to burn my clothes because the smell of smoke and pungent spices will clearly never leave them. On Monday night, I decided to do it all over again.

In light of which … would everyone please stand up and give a warm welcome to Smoking Goat.

If Patty and Bun, Pitt Cue, and Flat Iron had a Thai flavoured love child, this would be it. Think hints of Americana, quality British base ingredients, and more than a healthy dose of Thai aromatics and spicing. Yes, it’s filthy and dirty. But it’s also finger licking good.

The room, which is little more than a bar with maybe thirty seats, is cosy, dark and attractively decked out. Appealing touches in the design (the blow fish hanging from the ceiling, cute lamp shades, great soundtrack) are mirrored in many of ‘the little things’ in the offer: a quality, focused and affordable drinks list, kaffir lime leaf infused tap water on the tables, top end Cornish meat and seafood.

The menu is just a few dishes long. By and large they’re for sharing (and, for once, suit that mode) and, mostly, to be eaten with your fingers.

Start with fish sauce coated chicken wings. Tender, yielding, deep fried wings covered in a sticky smelly fish sauce marinade. About as subtle and nuanced as a Robin Thicke video, and all the better for that.

Use some cutlery just momentarily in order to eat a juicy, plump, coal roast scallop in a sweet red nam yum sauce, and maybe to cut through a smoky roast aubergine salad. But do pick the shell up to slurp down the juice, and run your fingers through the aubergine’s dressing once your done.

The main event, possibly, is a whole (but dismembered) Cornish crab, covered in a sticky, brown, chilli and palm sugar sauce. This is basically Thai style Singaporean crab. Which means you need to leap in, forget about the meat reward to work ratio, and just enjoy sucking the sauce off every leg, claw and shell. There are aromatic herbs like hot mint and maybe some curry leaves, then sticky rice to mop up the addictive, spicy sauce (at that heat where you feel the need to keep eating to avoid the pain). Delicious.

Yet I think the two best dishes might (currently) be glazed lamb ribs basted with fermented shrimp, chilli and palm sugar, and slow roast duck leg marinated with galangal, lemongrass and kaffir, then basted with something I’ve never heard of and certainly can’t remember. Both come with more stomach expanding sticky rice, dipping sauces, and a decent, occasionally Russian roulette hot version of a green papaya salad for the win.

Are the Thai flavours ‘authentic’? Do you know what, I suspect that whilst it’s white boys cooking Thai food with an unashamedly AmericanaBrit twist, they’re actually pretty close. But frankly, who cares? The food at Smoking Goat is moreish, tasty, vibrant and filling enough in its own right. I’d be surprised and perhaps a touch disappointed if, over time, they don’t extend the offer a little: some sort of sweet and sour and spicy soup, perhaps; the mother of all hot dishes (something curried?); and definitely a fish dish or two. But it’ll do for the moment and I’m glad they’re walking before breaking into a sprint.

Food snobs please remember that praise like this is always relative – Smoking Goat serves very casual, relatively inexpensive, feel good food. It’s as much a bar with grub as it is restaurant. But I do think that what they’re doing is new, well conceived and fairly priced, and that they don’t take themselves too seriously. Which makes Smoking Goat a great addition to central London eating, and very definitely A Good Thing. Just remember to wear disposable clothes.

As a vaguely related aside, the venerable Marina O’Loughlin mentioned on Twitter a few days ago that Skye Gyngell’s recent opening ‘Spring’ will probably be the most reviewed place of the year. She may well be proved right. And from the menu and reports thus far, it sure looks like a good place to go and eat. Albeit you’ll have more fun if someone else is paying.

However the place that ought to cause the biggest stir over the next few weeks is Som Saa, which opened as a pop up at Climpson’s Arch off London Fields at the weekend (serving scran Thursday through Sunday).

This will be the best Thai restaurant in London (the guys at Smoking Goat should be fine with this – it’s a different concept). It’ll be as authentic Thai as you can (or need) to get, with the cooking led by an intelligent and innovative young British chef (Andy Oliver), mixed with a dose of modern hospitality, and staged in a convivial setting. I’m out of the country for the next four weeks and I expect to eat in some awesome places. Yet I’m gutted I’ll have to wait to December to check out Som Saa … let me know how it is.

On which note, I’m going to take a break from spamming the internet whilst I’m away. Recharge the batteries and all that. It’s possible I’ll drop a sneaky #Supplemental or two. But normal service will resume in December.

NB. I ate as a guest on the first occasion. But liked it enough to return on my own dollar, and decided against invoicing them for two new sets of clothes.

Photos thanks to Louis Fernando. Check out the excellent www.tuckandvine.com.