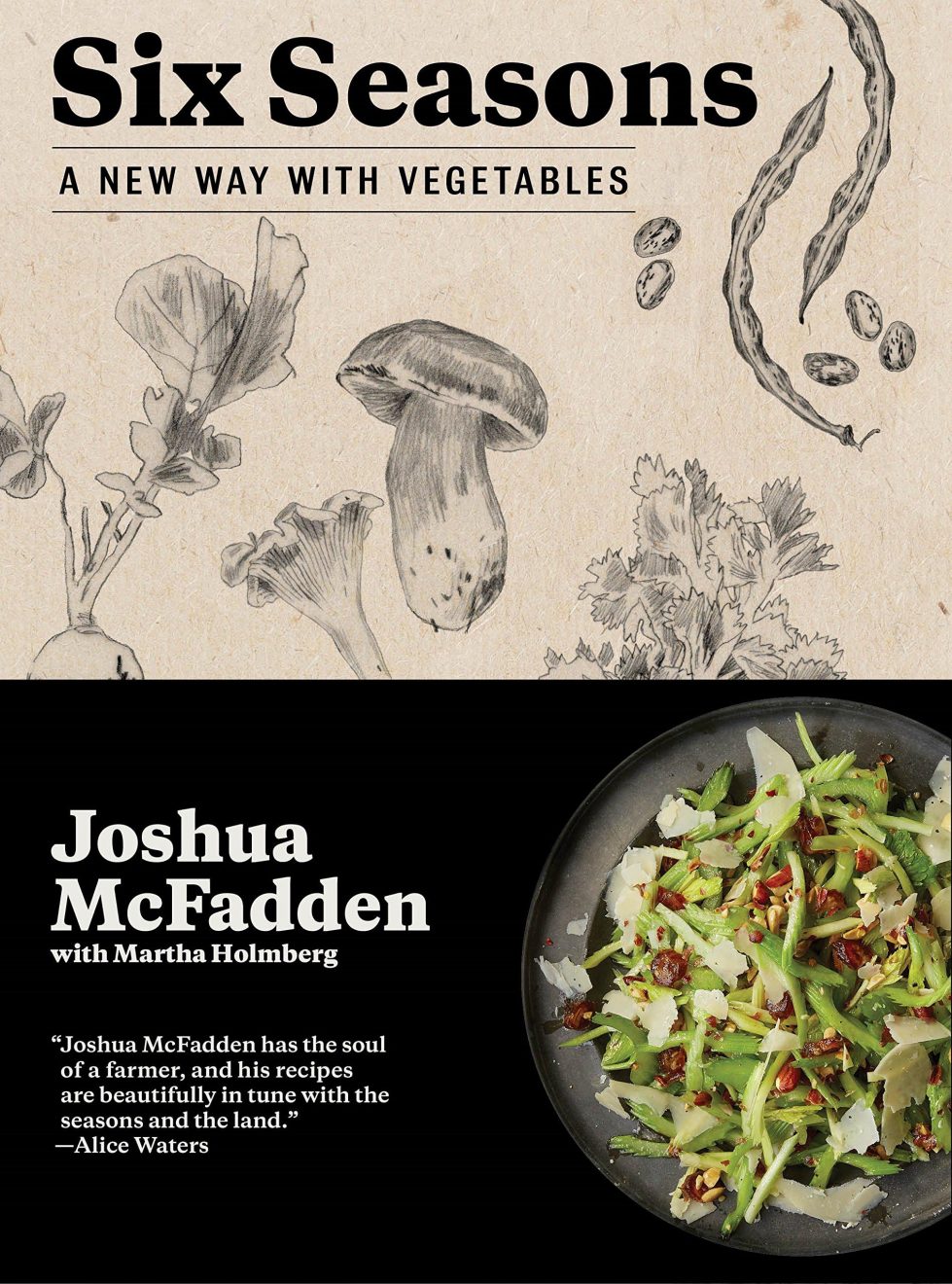 Six Seasons; a new way with vegetables
Joshua McFadden
Published by Artisan
A contemporary cookbook focussed on making the most of vegetables when they're in season. North American authors, but very much applicable to British and European ingredients too.
Buy now on

On 26 February 2018, NYC-based chef Josh McFadden’s cookbook Six Seasons; a new way with vegetables was named Cookbook of the Year (2017) by the International Association of Culinary Professionals (IACP). The book won a second award, too, in a ‘general’ category.

It was quickly noted on social meeedja, however, that the fact McFadden’s co-author, Martha Holmberg, is the CEO of the IACP, might just possibly maybe surely definitely give rise to a conflict of interests question and double exclamation mark.

Cue hand-wringing, public apologies, a promise to refine entry policies for next year … and revocation of both awards. Cue also me finally clicking “add to basket” on a book that I’d been meaning to purchase for most of 2017.

Had an unremarkable book nearly profited from heady connections? Or was a potentially classic tome now smudged by a backlash over superficial details that bore no relevance to an otherwise (relatively) objective judging procedure?

No award process is perfect (can there even be a single ‘best’ cookbook of any year?), though the issue here seems particularly clear. Nevertheless, after a weekend spent immersed in and cooking from the book, I’d say McFadden’s been unlucky. Six Seasons is quality. It’s informative, tasty, should stand the test of time and perhaps most significantly, accessible. Certainly, you’d expect it to feature in a short(ish) list of best cookbooks produced either side of the pond in 2017.

Mcfadden (*cough* and Holmberg) break the vegetable year into six seasons based on his transformative time spent away from the professional stoves of Blue Hill NYC, and in the fields at Four Season Farm: Spring; Early Summer; Midsummer; Late Summer; Fall; and Winter. Within those seasons sit a total of forty vegetables. Nothing crazy, just things like asparagus, lettuces, radishes, broccoli, cauliflower, potatoes (early and late season), carrots (also early and late season) and so on. Each of those vegetables the gets a thorough working over: there’s a brief summary of the vegetable and a few general tips, plus a bunch of enticing recipes that’ll sort you out for sides, mains, sharing dishes and week night suppers. In fact it’s pretty bumper — with more than 200 things to cook, and a general encouragement to use those things as inspiration.

About half the recipes you’ve seen many times before: couscous with peas and apricots served with lamb meatballs; smashed broad beans, mint and pecorino on toast; grilled corn with chilli butter; spaghetti with cherry tomatoes and basil. But I know from my own experience of trying to write cookbooks that please all people and are a thorough examination of a topic, it doesn’t actually make sense to leave out what might seem obvious to some. Without a smattering of the simple and classic, recipe books might easily be accused of having no clothes on. And though it’s being presented by a farm-to-fork chef, it feels as though the intended reader is interested but Average Joe, rather than geeky Farmer’s Market Food Snob Ed.

In any event, beyond those recipes there’s a glut of appealing combinations: tempura sugar snap peas with a tonnato and lemon dip (in fact, lots of tempting fried thins); roast carrots with carrot top salsa, avocado and seared squid; baked cauliflower with salt cod, currents and pine nuts; raw corn with walnuts, mint and chillies; roasted and smashed beetroot with spiced green sauce; raw parsnip strips with citrus and orange.

Further, though the recipes are many, the book is more than a prescriptive collection of dishes. There’s a section to start on larder bits, generic sauces and sprinkles that are used through the book to add texture and interest and, I think, are what really make it a worthwhile addition to the myriad recipe books out there. The compound butters, vinaigrettes and dressings are sparky (pickled vegetable butter and mayonnaise, caper and raisin vinaigrette), there are flat breads, strong views on dressing green salads and so on. Like a Bar Tartine for the home cook (to my mind a brilliant and essential book, but certainly something for aspirational cooks).

Six Seasons isn’t really a new way with vegetables. The recipes aren’t as modish or inspiring as in Gjelina, as seasonal and new as in Gill Meller’s Gather, nor as cerebral, calming and inventive with vegetables as Anna Jones. But they are a realistic nudge away from the obvious, and offer home cooks plenty of material with which to expand their repertoire.

It’s value,  I think, is that it’s not nearly as ‘cheffy’ as you might expect it to be; it’s good that a contemporary, chef-written book offers tricks and twists to a broad group of people, and notes that seasonal eating does not just mean fancy  vegetables, but potatoes, carrots and peas too.

Big, chunky book packed with recipes and tips. Pleasing on the eye and in the hand, and easy to navigate; which is an achievement given the amount of content.

Home cooks wanting to expand their repertoire, and eat fresh, seasonal vegetable-led food (nb this suits omnivores, rather than solely a vegetarian cookbook). Doesn’t need access to a remarkable grocer or farm shop.