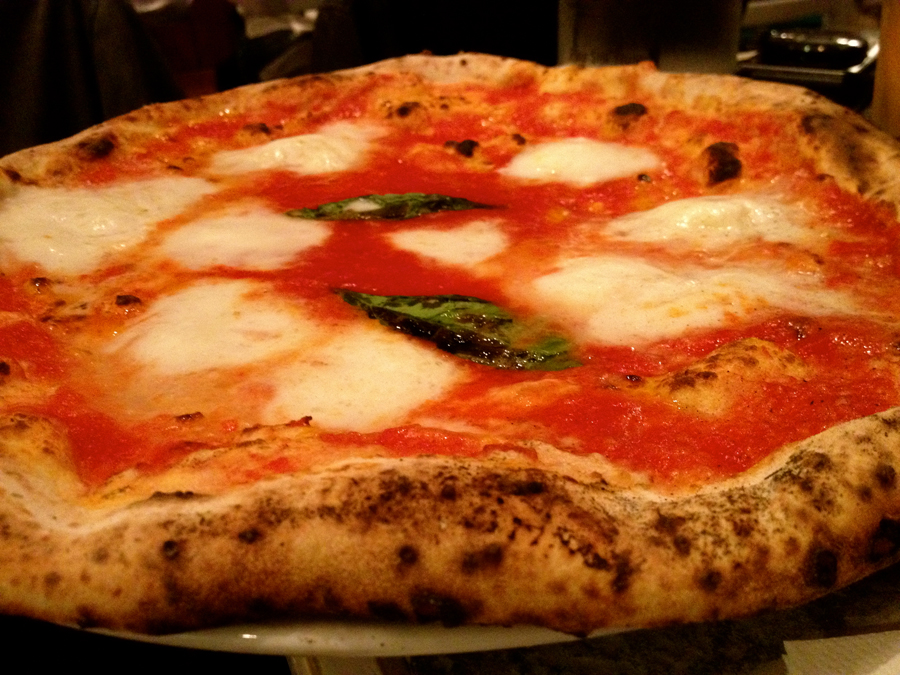 I sometimes wonder whether I’m a bit too willing to travel pretty much anywhere in London to try out a restaurant, visit a market or drink good coffee. Plenty of people I know are reluctant to go beyond their nearest Pizza Express. I’d rather be me. But there are still times I think that a forty-five minute bike ride in the rain (so an hour and a half round trip) is a little disproportionate.

One such occasion was last Wednesday, when I was cycling into the wind and on a seemingly never ending incline through deepest, darkest, West London. My little Brompton wheels were long overdue some new air, my bag was heavier than usual, and I was basically thinking that this was a pretty odd trip to make, just to eat a pizza.

The destination was Santa Maria in Ealing. Small, unassuming, simply decked out, it looked no different to many ‘local’ pizzerias dotted at the low rent end of high streets around the country. Not an obvious end to a sweaty slog.

But my negative thoughts about the journey (which, to be fair, wasn’t even close to some of the others in the group – Peckham and High Barnet!) were pretty much overridden within 5 minutes of entering the room. The pride and passion of the owners (we met one half, Pasquale) and the revolving door of contented customers were great signs. Any remaining questions and doubts were totally banished upon first sight and taste of my top quality and totally authentic Neapoletan style pizza.

A quick aside about Naples and pizza is probably useful …

Because anyone with links to Naples will tell you that Naples is the home of pizza. There’s an element of one-eyed local triumphalism here, but some persuasive evidence too: there’ve been pizzerias there since the start of the 18th century; it’s where the Margherita was invented; and the ‘Pizza Napoletana’ has been protected by the EU. Neapolitan style pizza has a specific character: a raised crust and a thin centre; soft, elastic and bendable; the cooked dough smells strongly of fresh bread; and the toppings are simple – because the quality of the tomato sauce is the main thing. All this would be irrelevant if it wasn’t for the fact that pizzas based on the way they make them in Naples are the best pizzas. At least I think they are.

Anyway, back to Santa Maria …

There isn’t really much that needs to be said about what we ate, other than the fact that we were all 100% happy with each of our pizzas. Santa Maria’s pizzas conformed, with aplomb, to the Neapolitan style. The dough was characteristically delicious, elastic and bendy. The tomato sauce sang. Any other toppings were sparse but enhancing. No one left the slightest hint of a crust.

If you must know more, mine (the ‘San Gennaro’) had a scattering of olives, anchovies and super little capers on the traditional tomato and cheese base. The most tempting of the others was Pasquale’s favourite, the simple ‘Santa Bufalina’, which is just tomatoes and creamy and salty D.O.C mozzarella. Alongside our pizzas we shared a rich and comforting aubergine parmegiana and were totally stuffed. But still found space to share a ‘pre-dessert’ pizza Marinara (the Santa Maria), which was just tomato sauce, garlic and basil, and was actually amazing. Oh, and we somehow found even more space for some outstanding Oddono gelati.

Is a Santa Maria pizza life affirming? Is it a ‘must eat before I die’ experience? No and no. Of course not. It is just a pizza. But it is absolutely somewhere to remember if you live even broadly in the West London area or are passing through. Those of you who like to venture beyond a 15 minute stroll or 5 minute taxi from your house would probably enjoy the fruits of a mini adventure there too; Ealing is closer than Naples to central London, just.

They don’t take bookings, but tables revolve quickly; it takes less than 90 seconds for them to cook a pizza. They do do takeaway.

Update summer 2016: Santa Maria have another branch in Chelsea. So not quite as west as before. Still the best pizza in London imo.

If you’re simply not going to make the trip but you do like pizza, you may be interested to hear about a new venture that’s soon to be starting up on a Soho street: Neapolitan style pizzas, served freshly cooked from the back a 3 wheeled van.

A near 500C oven, on wheels, just above a petrol tank. What doesn’t sound sensible about that?

Basically, two brothers decided that they liked pizza and wanted to sell it. They heard about putting a pizza oven in what’s effectively a mini Robin Reliant and decided to buy one and do that. I’m not sure whether this was a snap or considered decision, and I suspect alcohol may have been involved. But they did take the time to work out that it would cost them less to collect the tiny thing from the bottom tip of Italy and drive it back themselves, rather than pay for delivery. Crucially they planned to use (and did use) the trip to learn about pizza from the masters.

I went to a Pizza Pilgrims preview last week and was won over by the enthusiasm of the two brothers and a recently added third ‘pilgrim’. They’ve put in the research and recognise that success will be partly reliant on sourcing the right ingredients – like Santa Maria, they’re using the traditional Neapolitan Caputo flour and San Marzano tomatoes and they’re agonising over the cheese. Importantly, the result of this enthusiasm and sourcing is that their product is good. Not yet the pizza you get in Ealing, but not far off.

They intend to focus on doing 2 or 3 pizzas really well and there’s every likelihood that they will be another great addition to London’s street food scene. Those of you who lunch in Soho will enjoy a Pizza Pilgrims pizza and probably a drink for about the same price as a sandwich and a can of fizzy sugar from Pret.

It’ll take a few services for the boys to perfect the logistics of cooking pizza quickly for queues, and they’ll bed in quietly for a few days before shouting too loudly. But keep your eyes peeled for a little green van with a chimney. 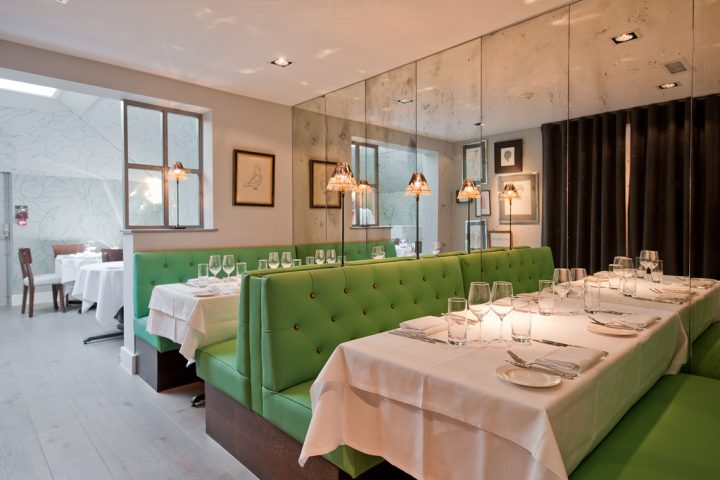 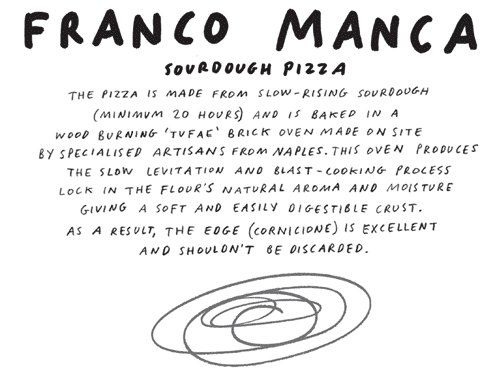 11 thoughts on “Santa Maria and the Pizza Pilgrims”