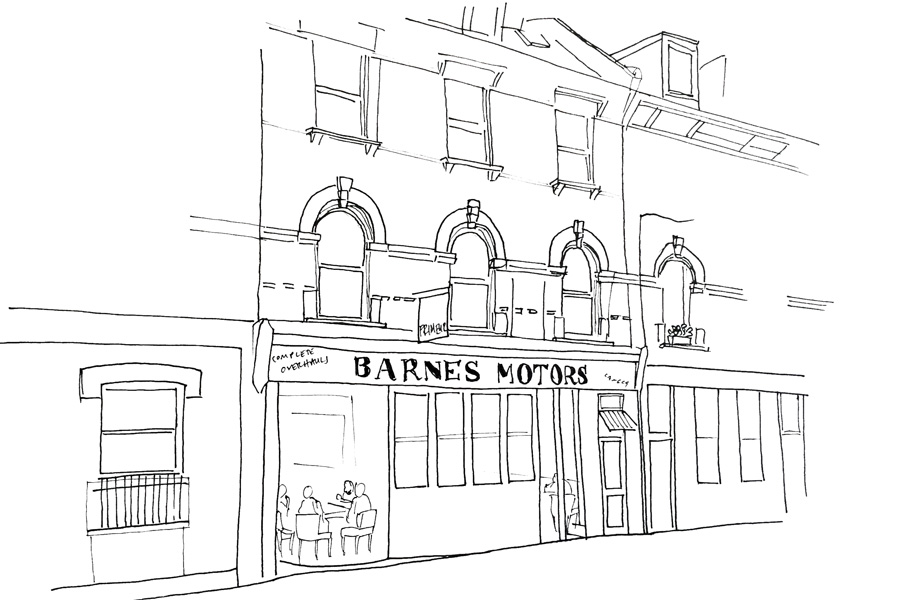 Some thoughts on two interesting new places in north-east-ish and north-east London.

Primeur opened a couple of weeks ago. I’d had my eyes on the venture since whispers of it began – largely because its address seemed a most unlikely one.

Petherton Road, N5, is 200m from where I lived when I first moved to London, and remains on one of my regular running routes now. I know it well. Yet it wasn’t obvious where on such a residential drag Primeur would, nay could, materialise. It turns out, however, that they’ve found an absolute peach of a site (an old motor garage – of course!) and converted it quite beautifully. There’s more than a hint of South West France when the screen door rolls fully back on to a wide, tree lined, sun dappled avenue – save that there’s far less dog shit on the pavements over here.

Inside, two large tables, thirty or so large golden chairs, a few ledges for perching, and a blackboard divided in two: on one half, a daily changing food menu; the other, an as frequently amended wine list. Stripped back, almost spartan, rather delightful.

One evening last week I enjoyed a decent board of air dried ham, a delicious plate of cuttlefish, sliced thin as it were al dente pasta, slices of cracking beef rump doused in a garlic sauce and sat next to snails on fat soaked toast, and a mound of spiced aubergine with a creme fraiche sharpener. Simple, flavoursome dishes, done well. There was a lot to like in the food we had, and much more on the menu that I would’ve happily tried.

As significantly, a pichot of red from the Rhone was an absolute beauty, and appeared good value to boot.

The food, whilst well conceived and cooked, felt a little toppy. The aubergine was maybe a little meanly portioned for £6.50. Is the rump and snails really a £15 dish? I’m talking about the odd pound here, pennies there. But this is outwardly aiming to be a neighbourhood gem, and the foundations for something like that include affordability, perceived value, and subsequent repeat custom. Little plates and good wine quickly add up.

Getting seating and table space at prime time is another niggle. No reservations is fine. As is a ‘find your own seat’ model when there are gaps. But evenings are clearly going to be busy, and running a first come next seated list for the busiest hour or two would be a welcome gesture. Having to keep an eye out for chairs as they’re vacated – and then losing them to someone who’s been waiting for far less time – is a real downer.

Finally on the gripe front (and these are relatively minor), the spartan aesthetic means the acoustics are, let’s say, not soft. In a room such as this, there’s a fine line between convivial chat and competitive noise.

I’m reminded, greatly, of 40 Maltby Street – the menu, the crockery, the wine focus and the battle for seating. I’m not sure Primeur is quite as loveable just yet. But it could well get there. Indeed, I returned for another pichot on Saturday evening, and got the feeling this may become a habit.

As a final aside, I note the private dining ‘room’ (downstairs, near the private rooms) looks as though it could be a very special one.

A restrained meal with modest wine is £30-35 a head. With hunger and thirst, it could easily be much more.

Some might consider the site of a former pub in Lower Clapton, to be an even more surprising area than Primeur’s for a restaurant focused on quality wine and food. But the opening of Verden at the top of Clarence Road is reflective of the rapid gentrification of this part of London. I wish it well.

Ostensibly, the offering is meat, cheese and wine and, genuinely, I’m not sure there are many places in London with better curated lists of those three glorious consumables.

Choose from a well thought through selection of French, Italian, Spanish and British cured meats, and enjoy the fact they’re served at their peak and at the right temperature. This is not a common thing.

Mottled orange and black discs of Morcilla Iberico and wafer thin slices of smoked Bath chaps from Trealy Farm in Wales (by way, cough, of Cannon and Cannon) were the kind of melt in the mouth pork moments that cause Jay Rayner to explode in puffs of patronising, self-pleasuring prose. You’ll find very fine Tuscan finocchiona, lardo di Colonnata, jambon du Noir de Biggore … and on and on. The cheeses are in similar multiple and equally difficult to choose between (a bulging triangle of Epoisse was supreme). So too the wine options. All items appear to be marked up fairly.

The trick will be convincing Londoners that they can make a meal from this sort of thing. There is also a short (2-3 choice) evening menu, and on the night we ate, sea bass with baby leeks, pickled mousserons was flawless and very well priced. But it would be sad if the meat, cheese and wine vision doesn’t remain strong.

Verden is definitely worth a visit if you’re relatively local. I much prefer the lower ground restaurant and deli area to the seating at ground level, which suffers a little from the same volume battles as Primeur.

A bit like Primeur, really. You could graze and sip and be relatively sated for a few notes each. Slip into oeno mode and £50 pp is easily reached.