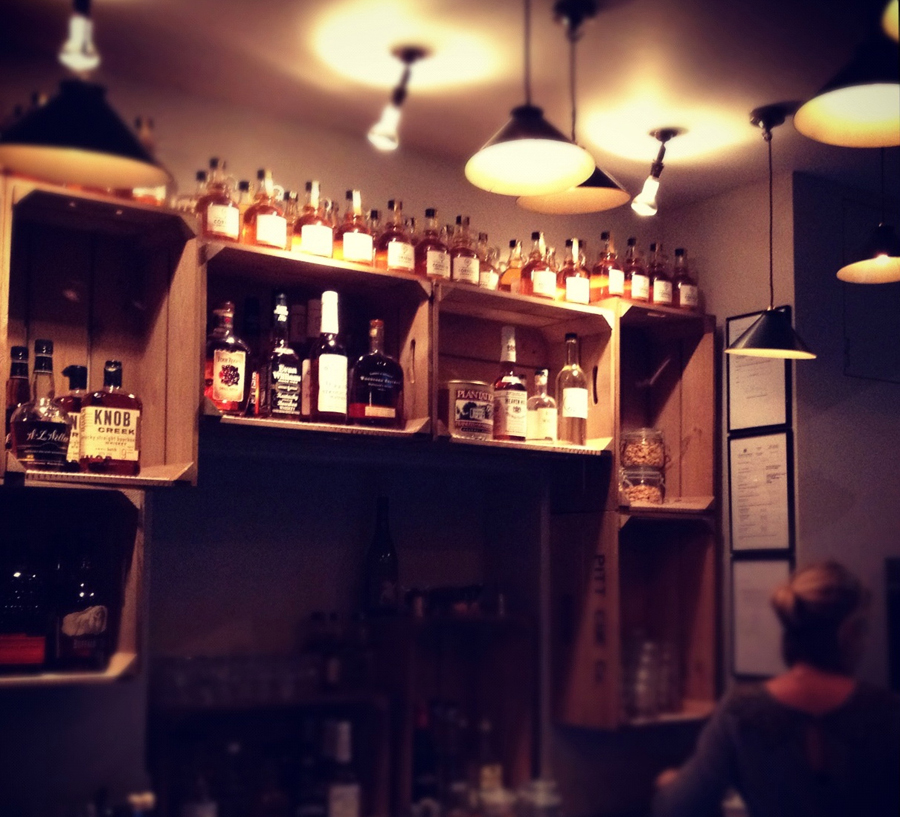 Note: see updates at the base of this post.

Ok people. We need to have a quick and discreet chat.

It’s about this Pitt Cue Co thing. Remember them? They were selling ribs and pulled pork and brisket from a truck under a bridge on the Southbank throughout the Summer. You possibly read this post. Or, more likely, you tried them out for yourself. And you might’ve seen I mentioned them the other day because they’re about to open up in a more permanent site in Soho (when I wrote about things I’m looking forward to in 2012). With a roof and walls and windows and everything.

Yeah well it turns out that new place is opening properly in a few days time (16 January to be precise). I was fortunate enough to go to a soft opening last night. And I thought you might want to read about it. You know, so as to manage your expectations for any trips you were thinking of making to Soho with the aim of grabbing some BBQ. Lest you get too excited and get involved in a stupidly long queue.

Because it’s not like they’re selling really excellent pulled pork, beef brisket, sticky ‘St Louis’ pork ribs or smokey crusty charred beef ribs, with a side, some pickles and bread for just £9-9.50.

And those four different meats definitely aren’t as good as or, quite probably, better than pretty much any other BBQ meat on offer in a London restaurant.

And that meat (again) wasn’t actually sourced from quality animals and farms and then marinated in (distinct) sauces of real depth and / or smoked and slow cooked with real care and skill. No way.

And those sides that come with aren’t that interesting anyway. Particularly not the ridiculously creamy mash with the [un]healthy sticky ‘burnt ends’ on top. Or the smokey baked beans.

And adding a portion of meat or a side isn’t (a) potentially unnecessary unless you’re properly hungry; and (b) very good value at £5 or £3 a pop, for meats and sides respectively.

And the sticky hot chicken wings aren’t proper more-ish and finger-licking. Not at all.

And their deep fried panko battered pickled shiitake mushrooms really aren’t worth having neither. Nooo. No way. Not the best deep fried thing I’ve had for some time. Well sophisticated Scotch eggs and battered Mars bars included.

And there’s been no thought behind the bourbon and the beer on offer, or the excellent ‘Snickers eton mess’. Heck, no.

Nope. Forget about it. Wouldn’t bother going, if I was you. Fail.

Who am I kidding?

Pitt Cue Co is an instant success. It is, in fact, all of those things above and probably more: they’re offering genuinely satisfying and well cooked scran at more than reasonable prices and without pretension. It’s a great addition to our eating out options, not least because good American style BBQ food is hard to come by.

Some might suggest it’s not completely authentic. But that’s fine – marinades that aren’t sweetened for the Yankie tastebud and the addition of novel British pickles seem like sensible tweaks to me. Others might suggest that the hot sauce on the tables isn’t hot enough. Again, that’s fine. I expect they’ll label it medium and make a hotter one.

In fact, my only real complaint (and this really will be said a lot over the next few weeks and months) is that this permanent place of theirs is too small. Just 15 or so seats downstairs and maybe 7 or 8 stools upstairs.

Whilst you can get takeaway buns filled with pulled pork or brisket for £6.50 over lunch and in the afternoon, the fact the food is tasty and the restaurant is small basically adds up to a long line out the door.

Guys – you’re good, you will be popular and could fill somewhere two or three times as big and still have a queue. I hope you can turn the tables; both for your well-being and our benefit.

Readers – I’ll see you for what could well be a rather long wait. Bring a Kindle.

[Top tip would be to wait a few weeks. I recognise that’s easier written than done. But they’re here to stay and, if anything, are only going to get better.]

You’ll get out for £15 per person, maybe around £25 if you’re hungry and thirsty.

Pitt Cue has moved on from simply serving excellent BBQ ribs and pulled pork. For me, the best items are on the specials board, or the more obscure cheeky side dishes, often deriving from co-owner Tommy Adams’s own pig farm, or other Cornish produce. A visit in mid summer 2013 included smoked pork jowl (fantastic texture and flavour), pig’s head sausage, the crispest potato ‘cake’ chips, char-grilled cabbage and insane beef on toast. Keep an eye on Instagram and Twitter to see when there’s Mangalitza pig coming in (it looks like Wagyu beef). I’m hyper keen to try one of their lardy cakes too (will need to go for a run first). The Pitt Cue cook book is also a serious tome – quality advice about very original BBQ dishes. Highly recommended.

Pitt Cue has moved to Devonshire Square. For more, read this write-up of it.

After briefly becoming a hot dog restaurant, the old Pitt Cue Co site is now Little Pitt – which is more like the original (buns and bourbon).