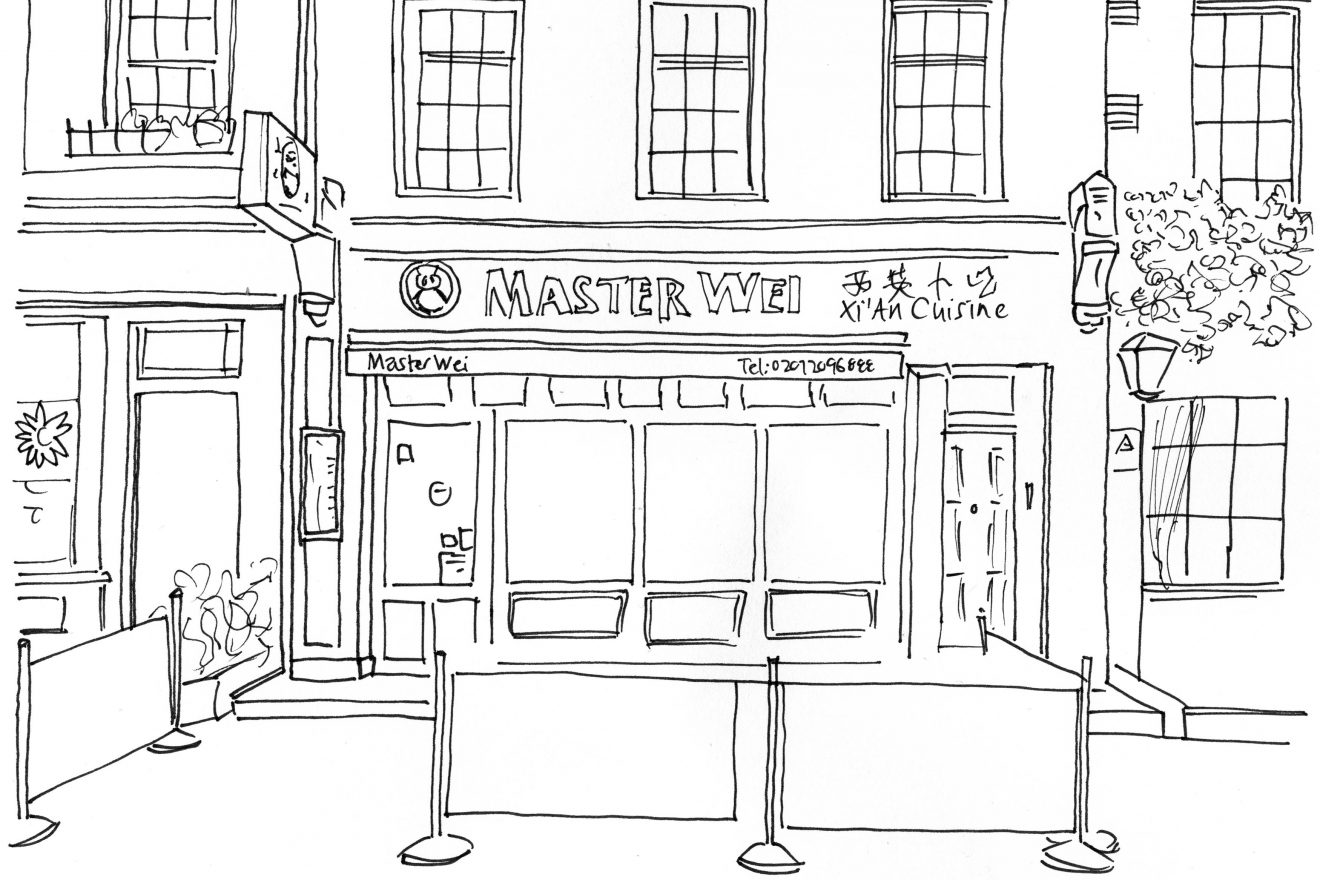 Just a quick doodle and mention, really, of what appears to be an excellent addition to London’s Xi’an-style cuisine — i.e.  flour-based foods from the capital of Shaanxi province in north-western China, such as hand-pulled noodles tossed in an intoxicating chilli and garlic oil; thick skin dumplings in sweet-sour broths; and meat-filled unleavened ‘murger’ baps.

There are a few places devoted this region’s dishes and flavours in London, including Murger Han’s restaurants in Euston and Mayfair, and most notably Xi’an Impression in Highbury, which has spawned two further noodle dens: Xi’an Biang Biang Noodles in Whitechapel, and now Master Wei in Bloomsbury. (Read Fuchsia Dunlop being knowledgable about Xi’an Impression, its dishes, and the cuisine in general here.)

Specifics of who’s done and now doing what are a little complicated, though I think it goes something like:

On first visit to Master Wei, and after a bowl of Wei’s pulled noodles with minced pork and some intriguing, doughy, cigar shaped pot sticker dumplings, it felt like this was a “nice that this is central and convenient for my next appointment at the Hospital of Neurology, but still pretty pleased I’m a short cycle to Highbury“.

However, sharing a bunch of other dishes over lunch a few weeks later suggested otherwise.

Has the epicentre of Xi’an food has moved with Wei Guirong to WC1? Quite possibly … with the strong caveat: if you choose well.

Highbury regulars will feel at home with Master Wei’s menu, given the hits are all there — beef biang biang noodles, sour and hot sweet potato noodles, cold chicken in the house chilli sauce and so on. But I think there’s possibly a bit more on offer, some of which muddies rather than improves the menu. Ignore, for example, various spring rolls, special fried rice with bacon, sweet and sour pork ribs and a very weird mixed salad of wilting (wilted?) lettuce, wood ear mushrooms, tomato and strawberries. I’ve also now tried a murger burger at every restaurant mentioned, and remain unconvinced.

BUT should you go as table of 2-4 people and order in the 2-4 cold starters; some dumplings; and then 1-3 noodles depending how many you are formation, you will eat very well.

Try something like: the cold boneless chicken in ginger sauce, smacked (sliced) cucumbers macerating in layers and layers of sesame, chilli, garlic and chinkiang vinegar, and the more-ish, textural cold Xi’an LiangPi Noodles (or the shredded potato salad — difficult to choose). Follow that with pork dumplings in a hot and sour broth of nuance and vigour that you might cry with joy. And then hand pulled, bouncy, biang biang noodles of your choosing (be it beef like up in Highbury, or an intriguing pork and egg option). Maybe some Qishan noodles with pork in sour and spicy Sauce if there’s enough of you.

It’ll be a feast, and if you get it right, each of the dishes tie together — with crossovers of chilli oil, sesame, garlic and vinegar — while still balancing those seasonings in differing ways. The main unifier being the straw you’ve sneaked in to make the most of the sauces.

Second time round the dishes presented such character and exacting seasoning, they seemed on an unquantifiable but definitively higher plain to my most recent visits to the Highbury and Whitechapel outlets. This is where I’ll head next time I get a Xi’an craving.

… and if you like noodles, and particularly ones of numbing tendency, I whole-heartedly recommend Liu xiaomian  in the basement of the Jackalope pub between Oxford Street, Marylebone and Regent’s Park. It’s street food in comfortable surrounds, and worth a diversion imo. Here lies an enticingly focused menu with just three options: spicy xiaomian (wheat) noodles with ground pork, chickpeas and Sichuan-ish numbing oil; sweet potato starch glass noodles with the same seasoning; and wontons in a hot and sour broth. You should absolutely select the extra hot option, then mix your noodles (or broth) thoroughly and enjoy the sweet, sharp, savoury and numbing characteristics develop as you eat your way through the bowl. 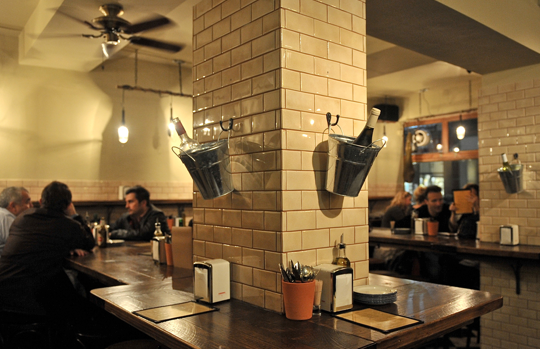