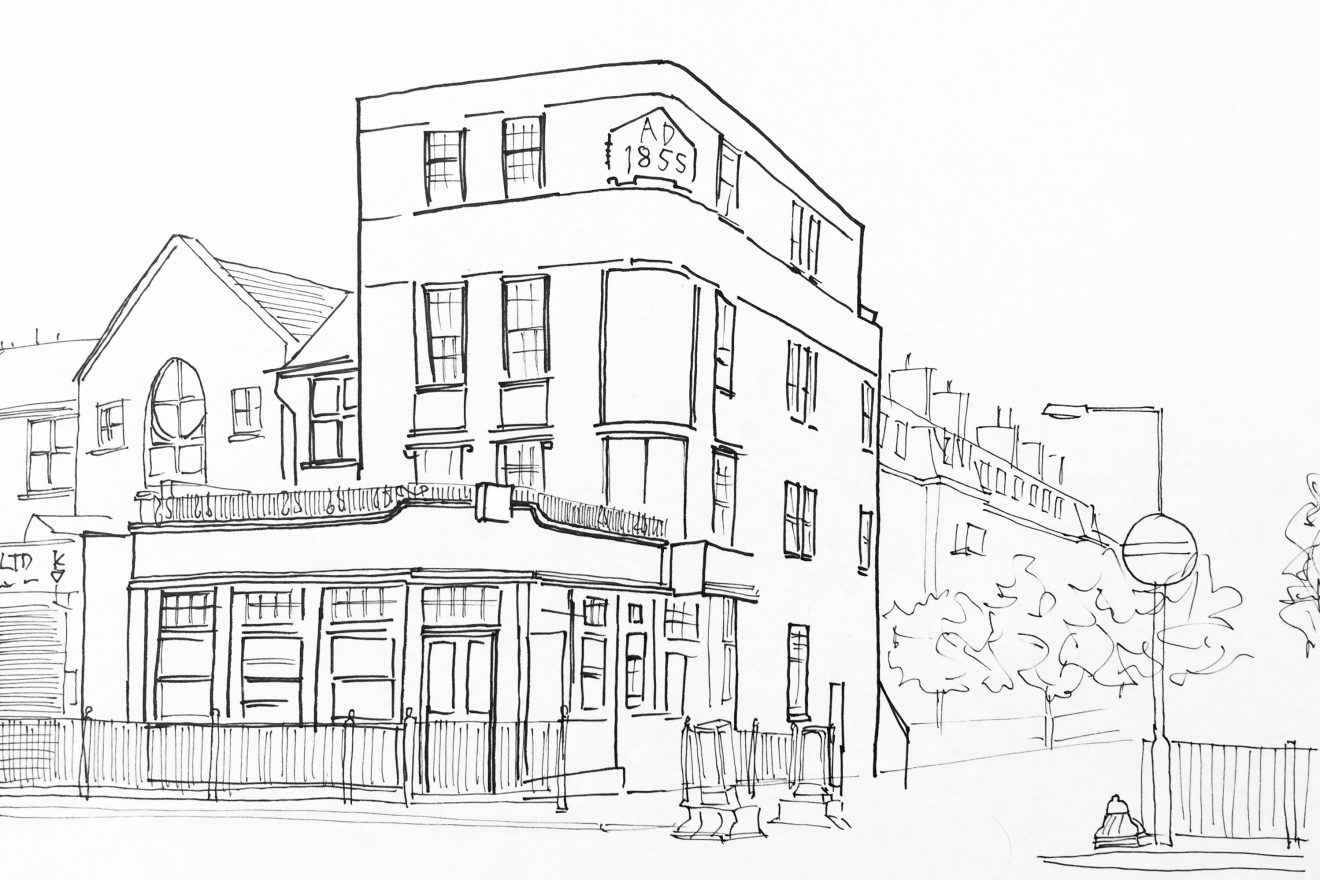 “This place used to be a proper London boozer. Nah farking look at it.” Said the nice gent supping from a can of Special Brew whilst he strode purposefully past the place I was headed into for dinner.

Look at it indeed.

The Marksman* was a grotty yellow pub half way down the Hackney Road, but it’s come over all Farrow and Ball grey taupe thanks to new owners Tom Harris and Jon Rotheram and a crowd funding project begun around a year ago. *(Technically they’ve dropped the article and it’s just ‘Marksman’ now, but feels weird to write about this particular proper noun on its lonesome.)

Inside still looks pretty London boozer to me. It’s all dark wood walls, plump, tight, royal green leather cushioning, unvarnished hardwood tables, a mixture of low chairs and stools, and a long and well stocked bar. Basically, at first glance you’d be forgiven for thinking it was just a slightly buffed version of old furnishings. Look closer, though, and you’ll see many of the fittings probably cost a little bit, and that progress is marked by the occasional scattering of graphic designed drinks mats, a selection of ‘craft’ London beers on tap, a smart but well priced wine list and a bar backdrop that looks like it could construct a neat cocktail or two. I can hear the complaints now (“Farking hell, what’s a man got to do for a fizzy tasteless pint of Carling?“), but I personally prefer the brave new world.

I’ve been in for Friday post-work drinks, and for a meal on a Saturday evening. It still definitely functions as a pub – evidenced and helped by overflow onto the street. However, crammed among the drinkers are a number of diners who’ve quickly worked out that this is better than your average pub grub. Better than most restaurants too, tbh.

Harris and Rotheram are both ex St John. The former ran the restaurant at the St John Hotel, which became his own One Leicester St (gaining a star in both guises), and the latter revamped Jamie Oliver’s Fifteen over the last couple of years (if you haven’t been, do, the Sunday lunch is particularly good).

They’ve not strayed far from their past with the food offer here: devilled mussels on toast; deep fried pressed potatoes; and a simple hunk of Herdwick lamb, served pink with just with yellow beans and anchovy emulsion, are exactly what you’d expect from chefs with their background. They’ve just tweaked and made things a little racier, as tends to happen once out of the confines of HQ’s white washed walls.

Interestingly, they’ve had the gumption to drop-in old hits – which is actually a smart move. Thank goodness, for example, that Tom Harris’s sublime, quivering, honey and brown butter custard tart from One Leicester Street has found a new home. There are few better finishes to a meal in London, and I guess he feels (quite correctly) that too few people ate it before.

The rest of the menu maintains the modern British simple theme. We shared a few starters, including some lovely little salt hake rissoles (like croquettes), and a decent, light but perhaps underwhelming courgette, borlotti bean and mint number. Mains were straightforward but well executed. One friend had the lamb, another pork shoulder, cooked slowly so it was pink in colour, but perfectly moist and tender. Refreshing these days to find that part of the pig un-pulled. The charred root veg and onions and mustard that went with looked spot on – if perhaps more Sunday lunch than Saturday dinner.

I had a curry, served with a glossy, buttered house naan and tomato chutney (which turned the dish from just tasty to a mighty feed). A nod to pub menus, I guess. Though rather than a twice reheated chicken korma on curry night, this was a generous dish of soft and yielding kid goat meat, the sauce oily but viscous on account of collagen broken down over a long braise. It was succulent and wholesome and very satisfying. I’m tempted to suggest a heavier hand in the spicing, or perhaps a few more curry leaves, but maybe I’m missing their reference point.

The closest [the] Marksman crew come to re-inventing the wheel is in a beef and barley bun, which is a soft, fluffy, enclosed steam bun full of just off-savoury mince and grain. It’s a British version of the cha siu bao and a massive success. The perfect bar snack. Along with the tart, that bun is a must order, even if you only popped in for a pint.

Which I suppose reminds me of my one, overhanging question mark: what are you (or they) actually doing here? Settling in for a pint, or having a meal?

We ate restaurant quality food in a cramped setting, jostling for a final chair to complete our table with the drinkers in the middle of the room. Our brilliant waitress squeezed through gaps that didn’t really exist in order to get food to mouths. Basically, on a busy evening, anyone after the serenity of a dining room or restaurant might be a little put off. And anyone looking for a pint and a game of darts could get the impression they’re a second class customer. You can’t be all things to all people.

But these are interim times – I mention it should you visit in the near future with grand expectations. The upstairs dining room will soon open up, and I guess most eaters will be shepherded skyward. When that happens, I hope they stick true to the division, perhaps losing a few items from the ‘Bar Menu’ we ate from; and I’m really interested to see whether things step up a notch in the restaurant. Not that it needs to; I would go back regardless.

Sure, once all the work is complete, the Marksman will be yet another gentrified pub. However, rather than being a Harwood Arms-esque restaurant with a bar for show and a Scotch egg, this will be a proper pub with a quality restaurant attached, in the Anchor and Hope / Canton Arms manner. Which is the very best way. Even if Special Brew Man wouldn’t agree.

Three courses, a pint each and a very decent and yet still sub £30 red between 4 was £45 per person.