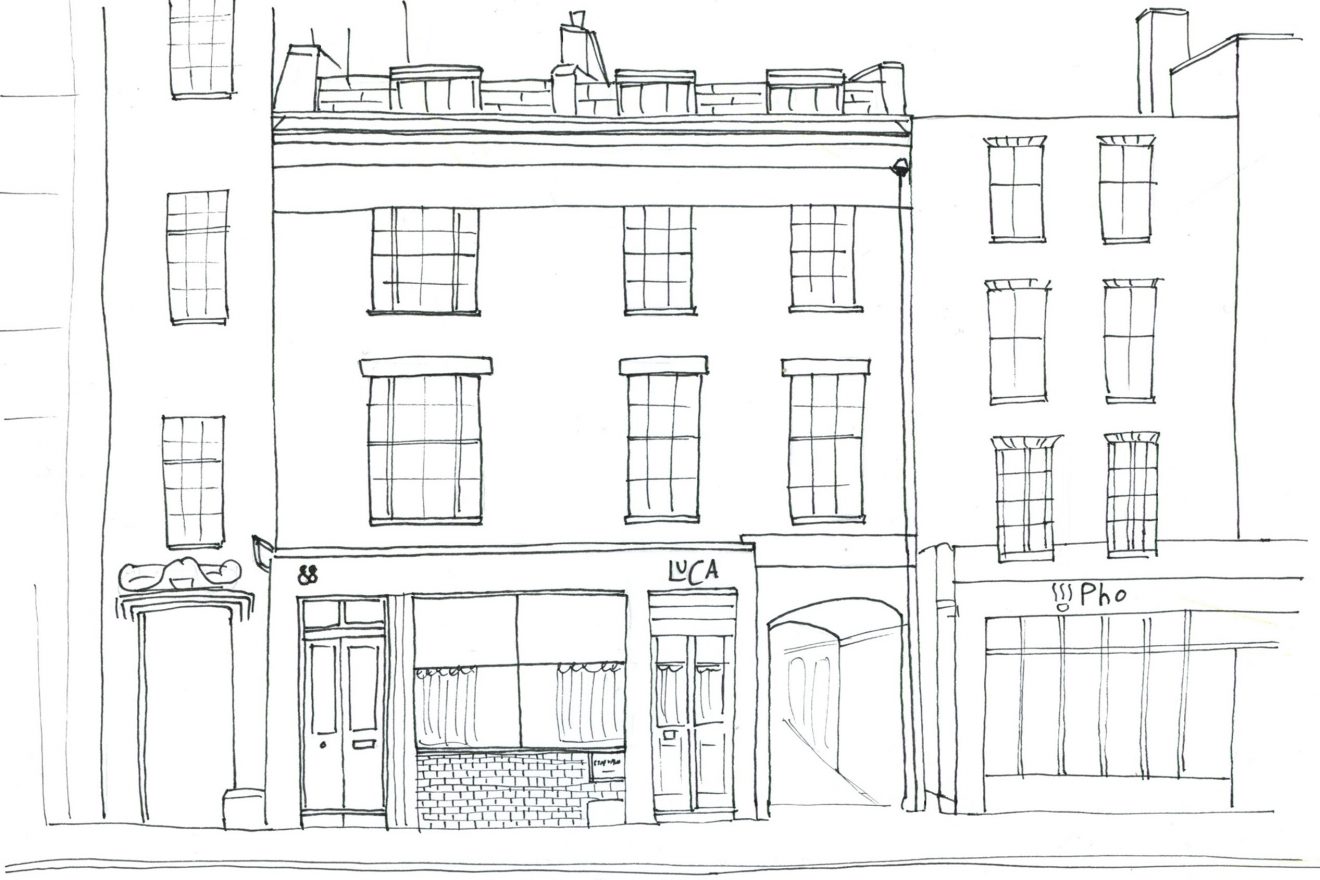 There has been a rush of end-of-year openings, each operation cramming themselves into the current calendar year — presumably having forgotten that 2016 is unlikely to be remembered as a lucky number.

Taco joints (words on these will follow in 2017), Indian-influenced chop-houses and small plates (ditto), pizza shops, ambitious locals, multiple burger joints and more. But also a handful of modern shiny-lux offerings, which either hint at a new wave trend of swanky dining, or represent a final splurge of cash before restaurant and real world fully implode next year; I suppose it depends if you’re a glass-half-full or glass-is-empty-broken-and-slashing-my-ulnar-artery kind of person.

Here are some thoughts on a few of them. The pace quickening as you read through.

Luca has been described as ‘Britalian’, which is catchy but I think places too much stress on the Italian side of things. The more nuanced versions on their website are “British ingredients through an Italian lens” and “observes the established traditions of Italian cooking, but breaks the rules a little“. So, basically: London restaurant, nice food.

It’s by the team behind The Clove Club and has been a long time in the planning and making. The design stage of that has been a huge success; I can’t think of many better examples of ‘super stylish, slick yet relaxing’. The cosy bar at the front of this restaurant hints at a smart venue, soft brushed-render walls, muted hardwoods, marble and mirrors too, from memory. But it’s still a surprise to see what lies behind: two well groomed dining rooms, taut banquettes, tall ceilings and masses of glass. Comfortable and elegant, yet not stiff. This is a place you want to sit. Actually, it’s probably a place you want to wander round and touch things.

The bar and restaurant have different menus; both relatively long and difficult to choose from, as at a glance you want to have everything on each of them. “We cannot mix the menus”, I’m told firmly as I ask if there’s a chance of the stuffed, deep-fried olives from the bar at my table. So small plates (pheasant milanese and green peppercorn mayo, Sea robin crudo, clementine and Capezzanna olive oil, Potatoes ‘cacio e pepe’) are for another time.

Instead, on offer in the main room is a menu broken into snacks, antipasti, pasta, mains and desserts, with five or six options in each. We eschew the antipasti in favour of a few plates of ham, pasta and mains each, I suppose for reasons of budget, time and girth. Wafer thin speck from the Tyrol, which is made from the deboned rear leg of a pig, had a superb thick edge of juniper tinted fat and otherwise flavourful, umami-rich muscle meat. It rather overshadowed the rippling sheets of Carmathen ham, which I find oversalted (and think the UK has better hams on offer). And both were probably lesser than the excellent, bouncy and sour poppy seed-edged bread and spicy, peppery olive oil that came to the table at the same time. Also: parmesan coated, ethereally light churros — naughty.

The pasta courses (around £10-12) were the best eats, I thought. From silky ravioli pockets filled with squash, to calves head ragu canneloni, and thin spaghettini coated with an emulsion of potted brown shrimp and mace butter, there’s real quality and a British twist in every forkful. Who doesn’t love a bit of refined and grown-up comfort food?

Mains were good too, though perhaps stuck in the “yeah, pretty nice” middle ground — neither at the reinterpretation of classic la cucina povera end (cottechino and lentils or polenta and ragu); nor ingenious Britified plates, as the titles of those dishes on the bar menu hint at. I had a meaty and very fine fillet of Cornish sea bass with deep fried artichokes, with artichoke hearts in a bagna cauda sauce that required more anchovy. Elsewhere, lamb cutlets went down well. But, you know: sheep, squash, spinach.

We would have tried the short and sharp dessert menu (baked chocolate mousse with prune kernel ice cream please). But the two and a bit courses nudged two hours of sitting, whilst waiting staff hovered around the pass in that necessary but unhelpful “can we do anything to speed things” way. Even in Christmas week, sometimes you’ve got to call time on lunch.

I need to revisit and will. Luca has the hallmarks of a top quality and quietly ambitious restaurant (and the bill reflects that). If we weren’t exceptions to the rule, then service from the kitchen needs to speed up, and service around the room isn’t at Clove levels yet, with a mixture of assured (sommelier, owner, besuited), and slightly uptight, timid and difficult to get hold of. Early days, though.

With half a bottle of (excellent and fairly priced) house red each and service, two courses and a share of meats edged towards £60 pp. You’re in £70-100 a head territory really.

If you think Luca looks like an expensive fit out, check out Temper in Soho. Neil Rankin’s temple of live-fire, whole-carcass (and no doubt other hyphenated cooking phrases) is dripping with investor cash.

To great effect, I think: no person of sound mind could fail to be impressed by the massive, glowing charcoal pit in middle of the room. Maybe even more impressive is the extraction system, which somehow leaves your clothes smoke free and therefore must’ve cost somewhere in the region of Argentina’s GDP.

Starters are tacos. Mains are BBQ’d meats on flat breads. Wines and cocktails make it a night out. This all ensures it’s nothing like a normal starter-main-dessert with the parents in-law neighbourhood restaurant. Head there with eyes open (as you should — it’s in a Soho basement), and you ought to have a cracking meal.

Largely because the quality of the meat, and the way it’s cooked, is right out the top drawer. Including quite probably the best beef I’ve had all year — from the fore-rib, grassy, rich, utterly bovine, melting yet still with a bit of chew. Slices of Welsh lamb leg and pulled goat were superb too (you order by the 100g). I could personally do without the fusion-style sides and toppings, like smacked cucumbers (not smacked or sesame’d in this case), shrimp and peanut sprinkles, chipotle sour cream and so on. When meat is this good and cooked this well, the juice-soaked flatbread, a green salad and a bottle of red is all that’s needed.

Puddings were unrefined and superb. From long-lasting memory, a kouign-amann-ish swirl dripping with butterscotch, and barely cooked cookie-dough-cookie, were both offset with decent ice cream.

It’s a little bit brash and your wallet will dented. But is fun, filling, and pretty different to anything else out there (Blacklock fuelled by a magnum of Cristal?). The plan is for more of the same. Go to this one before then, and buy stock in bespoke grills and extraction.

Maybe you could be thrifty and keep it to £50 per person. But with drink, service and more than one course, it’s likely to be £65-90.

One of three new restaurants in the St James’s Market area between Regent Street and Haymarket, Anzu is the Tonkotsu ramen chain’s smarter, West End-working but East End-looking younger step-brother. Glass boxes are difficult to add soul to, but I think they’ve done this well, mixing the subdued and smart nicely. It’s comfortable enough for low-key meet ups, but also chic enough for meals with colleagues. Whatever reason you’re there, do have a feel of the strangely tactile squares of Japanese wallpaper.

Superb king crab and pork dumplings kick things off. Also unfeasibly tasty daikon and spinach dishes, the chicken karaage from Tonkotsu and cured salmon. Mains include bowls of rice with impressive and generous katsu chicken or seafood (though it all amounts to something a little dry and monotonous — does it need a different dipping sauce?); great Teriyaki chicken or salmon; and ramen (as yet untried, but given the background should be good). Without the starters, it’s a very affordable central London lunch or dinner option (£12-20). You can make an event of it with the early bits, decent cocktails, wine and good sake.

We were hosted by perhaps the most genial and quick witted maitre d’ in the business, though speed of food from the kitchen was laboured, and it’ll be more fun when full.

This is by some distance the least glam, most down to earth restaurant in the shiny enclave. I’ll be back for ramen and hope it does well.

An outpost of the famous Manhattan-based Skandi restaurant with the same name, Aquavit is on the Regent Street side of the aforementioned St James’s Market. It’s beautiful. The staff are beautiful. The food is beautiful (who knew meatballs and potatoes could look so refined?). Even the loos look better than your living room.

I was pretty impressed with what we ate — from herrings through to cod and turbot, the cooking is precise and sophisticated, a contemporary example of classic Nordic food.

Thing is, classic Nordic food is basically home cooking. Those meatballs, mushroom filled dumplings and hefty bits of fresh white fish are supposed to warm you on a cold night; preserved fish was invented to keep everyone in protein through winter; and aquavit should be enjoyed by the bucketful (not pricey thimble) because everyone deserves to be jolly, especially when there’s no chance of ever seeing the sun. This should really be food that’s served with generosity and eaten in a boisterous atmosphere, rather than tweezered and then picked at with lift music for company.

That’s always been the Aquavit’s thing. Fair enough … but to sit in that beautiful room felt like playing an extra in a restaurant scene from American Psycho. Just a bit too early 90’s, besuited fund manager and, dare I say it, Trumpian, for my liking. The [power] breakfast menu looks good, mind.